@GeoffS’s New printer - corexy or not? post was so good, I’d like to do it again, but differently.

I gave up on my Cantilever printer design based on leftovers and have decided that I’d like to buy a printer that someone else designed. I’m sure I’ll start modifying it soon, but I want to start from a tested design. I want to spend my design energy elsewhere right now. (If I get another working printer, I can afford to try out new experiments on my existing self-designed corexy, which is currently my workhorse.) I want my kids to be OK printing with it.

The least expensive printer I’ve found that is even close to meeting my requirements is the Creativity ELF at about $450. That has a wrought bed with 24V DC bed heating, is not easy to enclose, might be a pain to extend due to using “VGA” cable to the hot end, and uses two Z motors; not enough to truly auto-tram, too many to automatically stay in sync; the worst option besides the four motor designs. Slightly cheaper but not as good (e.g. neither synchronous sides nor auto-tramming) is the Two Trees Sapphire Plus for $420. With neither bed sensing nor a bed I trust to be flat, I’d expect it to be as frustrating as the Tronxy X5S was for me earlier.

An SK-Tank, which looks easy to enclose, is about $1500 shipped fully kitted out with all the options, including genuine hiwin linear rail, except a raspberry pi (which I can better source locally), but will take an indeterminate time to ship; it’s one guy. Would be about $300 less with LDO rails.

The Vivedino Troodon moves the X/Y stage up instead of moving the bed down. It is available to ship now and comes fully assembled including enclosure, for a similar price as the SK-Tank. It runs on linear rails but probably not true hiwin… Includes air filtration, so maybe I could print ABS in it, at least if I use a carbon filter. My family says no ABS until I’m doing air filtration! It does use 4 Z motors. I’m concerned about racking if one fails, but the U-shape flying X/Y stage probably has enough flex that it makes at least a little sense to have 4 motors. Can’t tell whether it has a cast bed.

Railcore is a bit over $2k which is a lot more than I want to spend but would ship more quickly. Not clear that it’s easy to enclose (it has doors available but the top is open).

Not sure exactly how much I’m willing to spend but I doubt it’s over $2k. Still thinking about this.

I’m sure I missed listing some desiderata I’ve considered as I have looked at printers. Any printers that mostly meet my desiderata that I haven’t considered?

The Hevort ticked most of those boxes for me. Having to assemble it and get it going is part of the fun. If I just wanted a relaible printer, I could have bought a Prusa for less than I paid for parts.
I expect I’ll spend as much time fiddling as I do prinitng once the Hevort is going.

I still have the Ender 5 which, afer some modifications, works very well, if slowly.

Yeah, if I wanted to self-source this one it would open up a bunch of options. Right now I want kit or assembled; unusually for me, I’m interested in exchanging money for services.

The SK-Tank has the option of self-sourcing lots of parts to reduce price. I don’t mind self-sourcing a few things, but for this one I’m generally looking for something that works out of the box, where that could include following assembly instructions with one or more of my kids… The more self-sourcing I have to do, the less true that is.

Once I have a reliable printer that others in the family can reasonably use (there are at least two with some interest), I can go back to the fun of design and redesign and various experimentation on my first corexy printer, when it doesn’t have to be doing workhorse duty.

The Voron Trident kits I’ve seen aren’t complete. They are frame, or some of the parts, but not all.

I’ve since seen video showing the Troodon stage being moved by hand when it is powered off, and it didn’t rack, which increases my comfort with its 4-motor configuration. Also it comes with low-mass direct drive with an orbiter, which interests me.

I guess I could effectively discount the price of the Troodon by the cost of all the ABS filament I have sitting around unused!

I would have put the Folger Tech FT-5 R2 on my list of possibilities but:

r/folgertech - Did Folgertech go out of buisness?

He might come back some day but for now has closed up his store.

Don’t know what your time-frame is for getting and completing it, but Ryan over at V1Engineering is working on a new CoreXY machine. 3 Z motors, belt driven, linear rails, Marlin firmware, pretty much checks all your boxes. 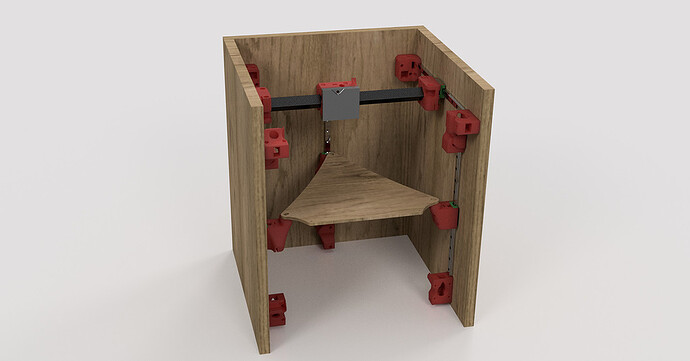 I can’t stop thinking about updating my print farm. I have a few projects in the works but I keep gravitating to the printer ideas. *Update 9/20/21 - Just about there, rough renders. ...

I don’t think I’d care for one with wood panels… Also, like the Rat Rig, lots of plastic components; I want to be able to print high temp plastics confidently so I’d rather not use printed structural components. I should have listed that, I guess I’ll go back and edit that in!

I should also add to desiderata a design that’s been tested for a bit, the point being to set it up and start printing, so I can go back to experimenting on my mostly-self-made corexy. I’m OK with some build time with good instructions, but (unusually for me) I don’t want to be solving puzzles before printing. Every other printer I’ve had has been an opportunity to learn from failure, and… I’ve learned a lot. But this one I’d like to set-up-and-go.

Who provides support only over facebook, so I can skip them from day 1?

Oh, I don’t know of any for sure. I’ve seen references to joining facebook groups. SecKit has one, for example. But they also have a presence on github and I think it’s a convenience not a requirement.

But if there were one, it wouldn’t be for me!

It looks like the Vivedino Troodon is a variant of the Voron 2.4 which they also carry as a kit: 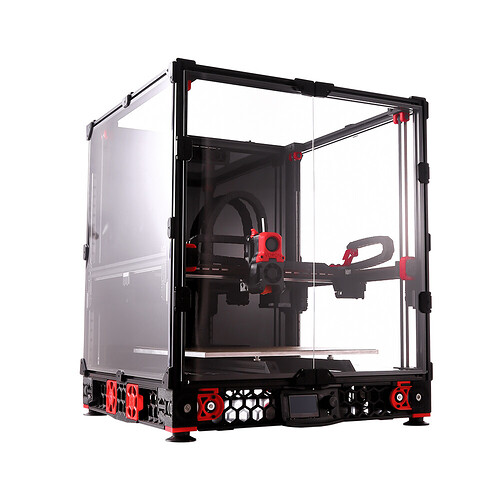 I think that the Troodon is basically an assembled version of that with an orbiter extruder, and metal parts instead of plastic. I don’t like that the heat bed on the Troodon sits above an acrylic plate, so the Voron 2.4 kit looks better in that regard. On the other hand, the Troodon has (I think) all metal components in the build chamber where the kit expects you to print plastic. But I can’t find anywhere whether the Troodon has a cast build plate. Probably? I hope so at that price?

Part of my problem here is that my family won’t let me print ABS right now due to smell. So I’d need to buy Voron 2.4 printed parts at $100-200, which gets me closer to the cost of the Troodon — and just printing out of the box.

I found a video that shows that the gantry is definitely flexible enough that it can rack, which I guess means that I guess four belts for X might be not actually over-constrained.

The Flyingbear Reborn doesn’t look easy to enclose at the top, and I can’t see enough technical detail on it to evaluate it well according to my desiderata.

As I see it, SK-Tank mixes the advantages of the Voron Trident motion platform (three points determine a plane) and the Troodon metal parts for everything under stress (I think, and hope). The Troodon is either 300x300 or 400x400; the SK-Tank is 350x350. I have been repeatedly happy that my other corexy is about 330x330, so going up to 350x350 rather than down to 300x300 seems good; 400x400 seems huge to me. I don’t like that I can’t find any information on what the bed material is on the Troodon.

I asked SecKit and it turns out that it can ship next week. That’s good enough for me! Hopefully in a few weeks I’ll be putting it together.

It does require some printed parts, but I have a few days to print before it arrives. They are not supposed to be temperature-critical; even PLA is supposed to be OK. I’ll print in PETG. Or maybe ABS if I think I can get away with it.

I’ll still have to enclose it and add filtration. I think, though, that for filtration I really want to return to the bottom of the printer rather than sucking in colder outside air, so even with the Troodon I would have been eventually modifying it before printing ABS.

I bought an orbiter extruder to eventually mount on this printer. Chose one with an official LDO motor and made of molded glass-filled nylon. It arrived today. I don’t yet have the printer to test, but wow it’s small and light. I love it.

It was a really tight race between the SK-Tank and the Troodon (which comes with the Orbiter out of the box; Vivedino has credits for supporting its development). I could imagine that if I were making the decision over again, it could have gone the other way.