Hi, I’ve just received my 1st cnc Laser, the 20w Vigotec VG-L7X from Banggood. Took about 15mins to assemble, instructions aren’t too bad for a Chinese product, and it comes with safety goggles in the box. No problems connecting to the machines wifi hotspot and using their own Vigoworks software engraving / cutting jpeg images is pretty simple. However Despite being advertised to accept DXF files, when I click the import DXF option in Vigoworks and select a file, it doesn’t import and the software freezes.
Has anyone managed to use any different software with this machine or managed to get the stock software to cut dxf files? Thanks.

A few days ago I got my new Vigotec VG-L7 (BX20). But the software works not well. I have problem to import g-code and dxf-files. According to the description, it should be possible to use other software such as GRBL, Benbox, Elekscam. Apparently a new firmware is needed for this. Has anyone used other software on this engraver? Thanks in advance.

Hello Dennis, I also bought the same device just a few days ago. Have you already solved the issue about VigoTec crashing on dxf files? I am encountering the same problem and I’m not sure what seems to be the problem. Thanks, Kath

Hey Dudes and Dudettes! After waiting a month, I finally received my VigoTec Laser, 20W (5.5 Output). Uhh, initial impressions were pretty slick, its well built and looks good. That’s basically where the dream stops and becomes a nightmare… Drivers installed directly to my laptop from their website, my laptop wont recognize the Laser is even plugged in, although it makes the sound when I slip the cord into the USB slot. If I try and use their VIGO software and connect via Onboard Wifi Hotspot, …

No it appear not, hopefully someone might come up with a solution. I guess if all else fails I could swap the control board.

My plan us to swap the control board to a basic GRBL Board probably from SainSmart. I have been very let down by this laser and the BangGood app/website. I guess I should have expected as much perhaps for simply $200. Also, don’t bother joining any Facebook Groups, everyone is a stuck up prick haha… “oh you DIDNT buy ORTUR? HOW DARE YOU!” is the most common reply.

Hello John;
I have a VG-L7X and initially had the same problem. I decided the DXF files were too big so I used Qcad to select smaller portions of my source DXF file and layout the elements I wanted to cut. I converted my source files so mm units of measure and maintained the units in every DXF file. I was able to import the smaller DXF files and cut them with the L7X using the Vigotec software. There are no limit switches so be sure your parts are smaller than the work area.
I also expanded the work area of my machine by replacing the main rail and belt with a longer ones. I can now process an element up to 190mm x 950mm.
Good luck with it.

Hi Tim, Thanks very much for taking the time to reply I’ll give Qcad a go. I was thinking about swapping the rails and belt to give me a slightly larger work area as well.

When larger images are imported, there is often an error message that says something about scaling the image to fit the work area. I just say continue or OK and the image imports and then I rescale it using the hand scalers on the right of the software display. I have been able to engrave JPG images that use the full range of my laser. DXF files don’t seem to produce the error. I have been able to cut 22" long parts from DXF files on my expanded L7X laser.

Hi ilaria_ercoli! This forum is now (and for the foreseeable future) available entirely for free and without any advertisement. This means that there is no source of funds to pay for automatic machine translation. The common language on this forum is English, even though it is not the first language for many forum participants.

Please feel free to use machine translation like Google translate, Bing translate, or DeepL translator in order to post here in English, as well as to read responses.

Would you be able to expand on your process and parts used to expand the work area on the LX7?

Here is a little more detail on the modification I made. I have tried to attach photos but can’t tell if the attachment worked.
I purchased two Items from Banggood:

I removed the belt clamp screws on the Y axis bar, removed the Y-axis bar and then replaced it with the 1000mm bar I purchased. It was necessary to tap the holes in the end of the bar to match the threaded holes in the original bar. I installed a longer belt and threaded it through the stepper motor the same way the original was threaded. I secured the belt using the clamp screws at the end of the bar.
I also removed the circuit card from the end bracket and fashioned a standoff bracket that could be attached to the stepper motor trolley. In this way, I was able to avoid extending any cables.
I am sure there are other ways you expand the envelope. I only needed to make longer parts so was it was not necessary to address the X-axis.

Hopefully, are present and they help.

Here are the photos 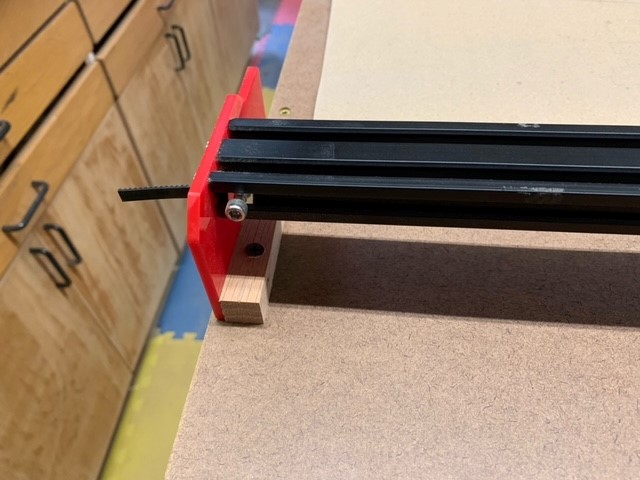 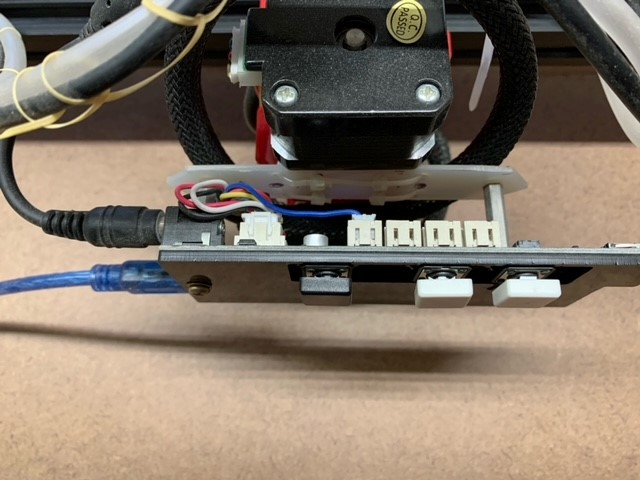 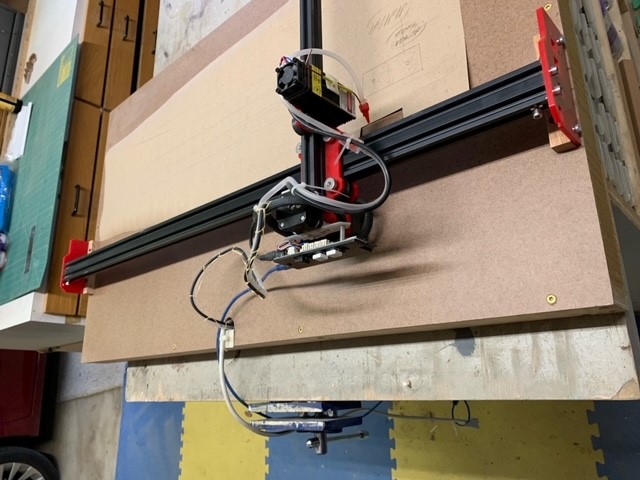 Tell me about they are ignorant bunch, never willing to help, the worst is New to Laser Engraving group.

let’s try to be nice

Thanks for the reminder, Doug!

I have heard that several folks on Maker Forums had some bad experiences on some facebook groups, and I’m very sorry to hear of it.

A community can be almost entirely composed of kind people, yet just a little unkindness even from only a few people can really change people’s overall experience. It just doesn’t take much. It’s why we try to be kind on purpose here.

“Be agreeable, even when you disagree” from the FAQ is wording that came with Discourse and I think it’s great. So my assumption is there are a few people on some facebook groups who are responding in ways that make things unpleasant for others, and it affirms the decision to focus on being kind and assuming well of others here on Maker Forums.

I really like Paul Stoffregen’s advice on how to ask for help on the internet. It’s also referenced in our FAQ because it’s really insightful, and thus helpful for meeting in the middle between needing help and providing help.

Thanks. I agree with you

MMM - I just downloaded VigoWorks 3.25 - Can’t upload DXF and can’t upload G-Code… Yet the buttons are there as if to tease you!

There has been a LOT of activity over the last few months at GitHub - Culminating in alternative firmware for the Vigo-LX7 which will enable it to be controlled with LaseGRBL, Lightburn and other popular software… But the firmware needs flashing using the Arduino IDE - Not for the feint hearted! The libraries needed are kind of obscure… I fluffed around for several hours and the firmware still did not compile!

The writer of LaserGRBL also added support for the VigoTec boards… I tried that and it does work, but I feel LaserGRBL has its own problems… I ended up circling back with VigoWorks and hope that a fix for the DXF and G code import issues will be found sooner or later…

In the meantime I might get myself a good DXF to JPG converter,or save CAD files to JPG if possible.

May I suggest running the LX7 on WiFi or uploading the job onto the MicroSD? Then you can disconnect the USB cable and all that gets dragged around is the power cable. There are solutions for that too.

Has anyone solved the issue of DXF’s not loading in Vigo Works v3.33?

Only new to laser engraving, but as a professional mechanical engineer (now retired) I’ve produce a LOT of DXFs for CNC machines, but I can’t get this to go ATM. Using R12 format (software doesn’t even seem to recognise later formats), all lines in layer 0, specified linewidth on all lines. Program hangs when loading the file. Filesize is irrelevant - I’ve tried some trivially small simple files with no luck.