Except for the intense heat, I always liked the old halogen torchiére lamps. I have a whole bunch that I’m no longer using but can’t bring myself to discard. One became a mic stand: Angus MacGyver makes a microphone stand — but I have several more.

It finally occurred to me that I have LED strip and LED power supplies. I tore out the halogen bulb supports, put 3 meters of 120 3528 LED/meter warm white LED strip onto the inside of the bowl (now acting as a heat sink), replaced the three-position power switch with a simple toggle, and had a nice torchiére that doesn’t make the room feel like an oven. Success!

I used it as a lamp while I fixed a bathroom light fixture with my son, taking the opportunity to teach him some basic wiring skills, like using and re-using a non-contact voltage tester to make sure that the hot wire is still cold like it was a minute ago, before touching it to put the wire nut on to connect the fixture to the main power wires in the wall.

Then, as I carried the lamp to put it away, with no warning, the bottom fell out: 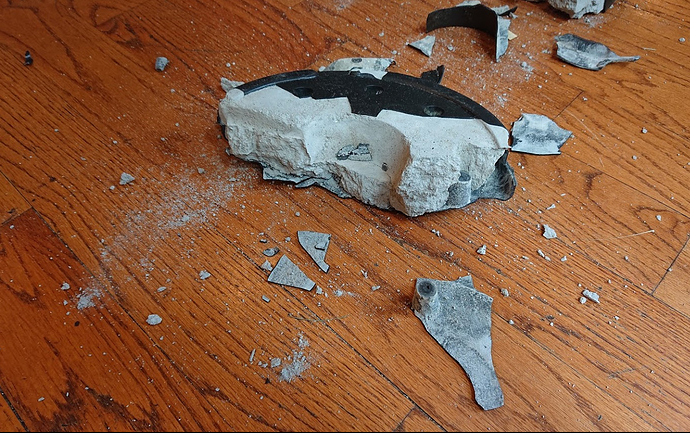 I guess I was lucky that I was over a floor that was easy to sweep, and not the rug.

Lucky it did not fall on a foot!