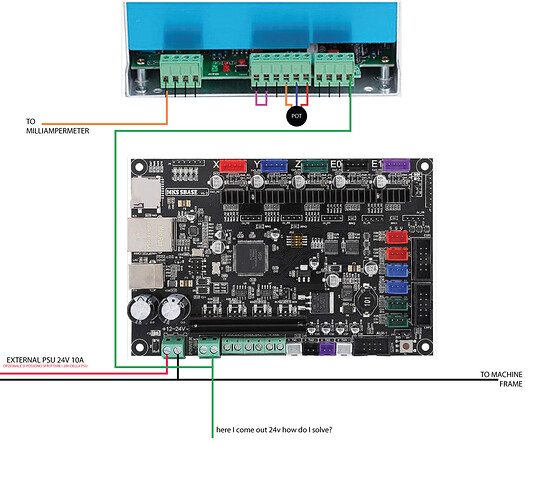 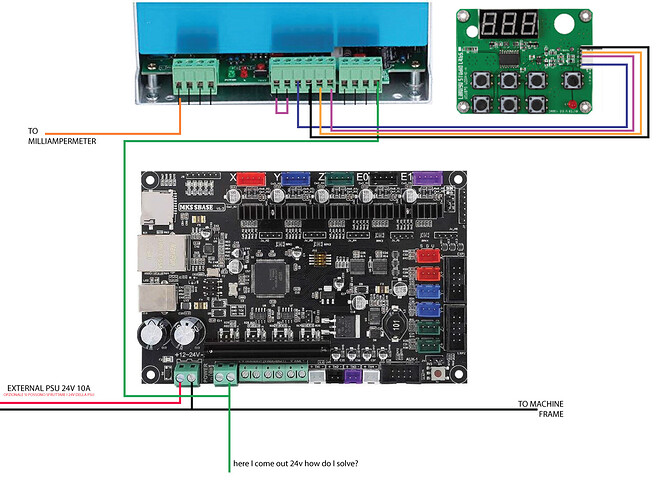 MKS-S-BASE-WIRING-pot-board1500×1135 320 KB
at this point, as you say, I could also leave the digital potentiometer of the k40 instead of installing a simple potentiometer or am I wrong? @cprezzi can you help me I can not manage I do not understand why from 2.5 I am 24v

If that pin has 24V on it do not connect it to the LPS.

What does the other pin (1) read???
Trace the pins back to the MOSFET Q4 to verify which pin is connected to the drain.

in fact the output milliamps stop at 17

How did you know the current stops at 17 without a ma meter?

How did you know the current stops at 17 without a ma meter?

What does the other pin (1) read???
Trace the pins back to the MOSFET Q4 to verify which pin is connected to the drain.

Got my unit running on 1.23 for PWM and 2.5 for enable (MKS SBase Modifications

Got my unit running on 1.23 for PWM and 2.5 for enable (MKS SBase 1.2/1.3) NOTE THE SETTING: 2.5^ leave out the ! for pin inversion. you do not want to invert the pin. Brian W.H. Phillips was right about the LED taking it to 24V when idle. I pulled D14 and everything is hunky doree now… I would be concerned if running an SBase board that this could potentially damage the circuit in the LPSU. Looking at a spare power supply I have here it looks like the L pin on the PSU is the cathode pin…

@donkjr turning in the forum I found this article but I did not understand how to unsolder the led diode d14 to solve the problem of the voltage of 24v on the mosfet?

Just connect the - pin of the bed output to the L pin of the LPS (like on your schematics) AND ALSO connect GND of the board to GND on the LPS.

Think of it like the + pin is directly connected to 24V input and the - pin is connected through a switch (MOSFET) to GND. So the - pin connects the L pin of the LPS to GND when PWM is on, which activates the OptoCoupler in the LPS.

@cprezzi so the updated schema and how is this that i just linked? and thanks for the prompt reply 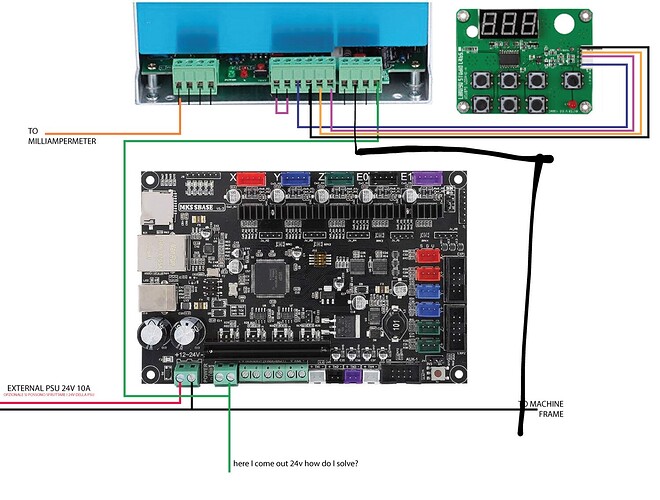 Ah! The led diode (D14’s) anode [see schematic above] is connected to 24V.
Therefore when Q4 is off its drain will read close to the 24V bus.

This LED just shows the on-off state of the Q4 switch.
It should have no effect on the connection to the LPS.
If you are concerned about it unsolder one leg of D14 or remove it.

It looks like the (-) pin is the DRAIN connection. We still need to verify.

Are these really negative (-) voltages they should not be?
Is this a measurement error with the DVM leads reversed?

With the power off you can see if the (+) HOTBED pin is connected to the +24 on the input connector labeled POWER. The POWER connector is to the left of the hotbed connector.

With the 24v power unplugged from the board measure the resistance between the pins
+POWER and +HOTBED.
If they are connected the resistance should be close to 0 ohms.

If the +POWER and +HOTBED are connected then via the process of elimination the other pin -HOTBED is Q4’s drain.

Make sure the LPS ground is connected to a GND on the controller board. DO NOT connect the +HOTBED to anything.

@Cama_Work Yes, this is correct.

I was not sure if the -Hotend was the drain. there is no pin # on the layout :)!

@cprezzi with this wiring does not work does not give me signs of life the laser does not turn on and off? How is it possible?

@Cama_Work Did you activate the laser with the “Laser Switch” on the digital panel?
Is there some other lock installed, like doorlock or water flow sensor?

the laser switch is activated but also not using the digital control panel and using the configuration with the PIN 2.5 bed nok I answer I can’t understand

This configuration should work. 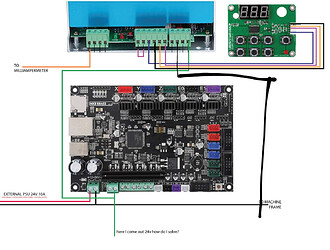 Are you saying that in this configuration the laser will not fire;

stop everyone seems to be able to fix it by reloading the latest firmware.bin uploaded by @cprezzi

Only last question but is it normal that through this configuration the PSU emits very high acoustic hisses?

stop everyone seems to be able to fix it by reloading the latest firmware.bin uploaded by @cprezzi

Does this mean it is now working???

for the msk sbase 1.3 board i have this running on a frame made co2 and a k40 cased one if u want how to wire and are still stuck if you google my name it will come up with my youtube name the same on here as there. i have made a vidoe of how i did mine and been useing for over a year