Hi guys, lil’ help here as I’m bloody stumped. Temp on the Hot End of on of My FB2020s is stable when it’s not moving but as soon as it starts printing it can waver up to 4c over temp, never under, so it’s not got a lack of power for everything. It’s been PID Tuned (automatically) within an inch of it’s life with the same results each time. The E3D Thermistor Cartridge has been replaced as has the wire, so it’s not that. Firmware is the current Edge smoothie, running on a Re-Arm. Nothing in the config has changed from https://github.com/AxMod3DPrint/Printer-Configs/blob/master/Harlequin/config - so I’m a bit stumped, the only thing I can think is it’'s the heater itself (no 24v spares currently, so not been changed) - It just seems like the resistance of the heater is rising when it’s moving. It is connected by a couple of Automotive spade connectors, but all of the printers I own use the same connection, so I don’t think it’s that and they’re locked in tight. You can see what’s happening in the below temp plot.

As a note it’s not the bed or cooling fans affecting it, as you can see by the plot the bed is off and the fans don’t affect the block due to both the E3D sock and it’s been PID tuned with the fan on. 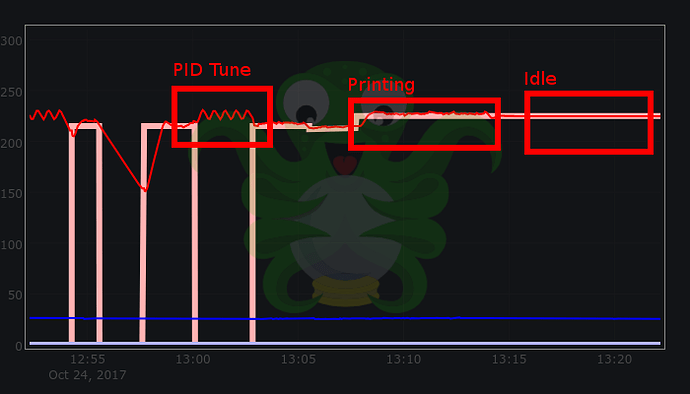 Perhaps a short in the heater wire? Try raising up to temp, disabling the motors, and moving the head manually to a few different points? See if there’s one where the temp increases and then move each length of wire into similar angles while the head is in another position to see if you can recreate the conditions?

@Nathan_Bohman - it’s all over the bed, it’s pretty much the same result everywhere over the bed, when it’s sat idle in any position, it’s fine, when it’s moving I’m looking at up to +4c over the set temp

Do you have an enclosure around your printer? If not perhaps try blowing a fan over the hot end while it’s heated and see if it’s air flow related? Perhaps, along that same line, your slicer is attempting to compensate for a cooling fan and raising the temp a bit? Perhaps try a different slicer and see if you get the same results?

@Nathan_Bohman - no enclosure and not airflow related, due to E3D Sock and it happens on the first layer when the layer fan isn’t running as well. I don’t think it’s Slicer based either as the other 4 printers would be doing the same if it was. (2 other FB2020s, AX-02 Delta and a AX-03 Railgun).

Tbh it’s seeming like a resistance issue somewhere but where is the issue. It’s either on the RAMPS itself, or the Heater Cartridge. Heater Cartridge has been ordered, so we’ll just have to see.

Try modifying the PID values. Auto tune does not always get the best values since it cannot take every variable into account (e.g. melting characteristics of the filament and cooling from movement). The link below describes what to do.
http://rigidtalk.com/wiki/index.php?title=PID_tuning

Sensor wire running too close to a stepper motor or drive?

@David_Sherwood - it’s possible, thing is I’m snowed under with print orders atm, so I’m trying to go for the quickest route, hence replacing the most likely parts first and working backwards. I mean it does print OK if there’s no overhangs but the stuff I’m printing has a fillet right on the first few layers which is causing curling.

@Rob_Sherman_Soulfibe - nope, it’s routed the same as the other FB2020s, so if one was affected, they’d all be affected.

@Wylie_Hilliard - if the PIDs were out it’d be swinging above and below the set temperature, not just being up to 5c hotter, hence me stating it seems like it’s more a resistance issue than anything else. IE resistance increasing when the printer is moving.

Excess resistance in the heater circuit would cause the temp to drop because current would drop. This is more likely a sensing problem (ie spurious high reads) or a fault causing the heater to send slightly more power than it’s supposed to. I’m betting on high reads since the temp waveform seems so jaggy. Wild guess though.

We had all kinds of these issues while developing the Ultimaker 3. Whatever we tried, we never got the PID controller really stable. Especially on different target temperatures (in our range of 200C to 350C) combined with our really small heater block.
And then I talked to a control system engineer. And the conclusion was, what we where all doing is wrong.

We are missing what is generally called a “feed forward”. Just a “add X output per degree requested temperature”. Without this, it’s really difficult to get a really stable temperature control in all conditions, once we had this however, it became really easy as the PID controller only had to “work” to regulate the offset after the feed forward not the whole control loop.

We don’t have an autotuner for it (yet), but we only had to tune it once.

@Ryan_Carlyle - aye but if it’s the other way where resistance gets lowered, it would cause the opposite, hence my line of thought. If the heater cartridge isn’t at fault, then I’m just replacing the RAMPS with a new one. That should cover most of my bases, if it’s not that, then the only thing it can be is the Re-Arm itself and if that’s the case, I’m grabbing a whole new control setup for it. Basically as I’m rammed at the moment, it’s a case of throw money at it until I fix it.

It’s normal to see fluctuation when filament is going through it and pulling off heat. Does print speed affect it? Will higher temp or slower feed improve it? Is print cooling fan cooling hotend? Better cooling will improve overhangs. Just s basic brainstorm here.

Maybe your power supply is not able to keep up with the load.

@Daid_Braam RepRapFirmware has that. I’ve been trying off and on to get firmware developers to do feed-forward autotune for years, and David Crocker was the first to actually do it. Works well.

Until you get into really high filament melt flow rates, heat loss is primarily due to Newton’s Law of Cooling, which is stupidly easy to measure and model. So you can get close to the right heater power very easily for 99% of users. Getting a filament melt power feed-forward component for high-speed printing is quite a bit harder because different filaments have different melt power requirements and the firmware doesn’t necessarily know the real filament flow rate.

@Brook_Drumm That was my thought too, but he’s seeing temp RISE when the printer is moving, which wouldn’t make sense for filament melt power cooling.

Too much negative feedback in the PID algorithm could cause the overshoot. Note that if the resistance of the heater was rising were rising during printing then the temp would be dropping (at least until the temp change arrived at the thermistor and the PID compensated). Almost all resistors (heater cartridges) have a positive temperature coefficient, but it’s usually fairly low.

It would be nice to see some kind of scale on the axis of the graph to get a sense of the magnitude it illustrates. Honestly, 4°C really isn’t that much in the real world with so many other variables that affect outcomes.

Im curious to see what tge cause is, mine does the same, but regradless of it moving or not. The fluctuations are somewhat more than what you have tho

@Ax_Smith-Laffin Did you post on the Smoothieware google group? Would be good to get dev input on whether they’ve changed anything in Edge lately (like, you know, stealthily adding a feed-forward component or something) or if this is more likely a hardware thing.