I’m trying to create a board game to give as a gift, so it has to look nice.
The game is long out of print.
Someone has kindly designed beautiful replacement piece files for 3D printing.
Link is below.
Unfortunately, I know nothing about 3D printing. My city library offers a class, but demand to use the machines is insanely high, and the printers are incredibly slow. You are only allowed about two hours a month to use the machines!!
I am pretty sure I could not print as many pieces as required. Three types, total of 48 pieces.
So, I clicked a link to a company, uploaded the files, and got a quote. EXPENSIVE! Sticker shock.
But, it’s a gift.
So, I paid.
The pieces came yesterday and I was BITTERLY disappointed.
Imagine if you printed a chess set to be played by ants. That is what I got. TINY TINY pieces, pretty much worthless. You can’t see the wonderful detail from the design.
So, I’m wondering if the original files are that size, or did I make a mistake, or did the company make a mistake, or what.
The way the modern world works is, everyone is much too busy to talk.
I sent messages to the original designer, and to the company I paid. SILENCE.
They’ve got my money, so not interested in my problems.
So, maybe you could advise me. How do I get these pieces to be about three times larger than they came out? The circular piece, the “Moat” came out barely one inch in diameter.
The game is named Troke, and I found the files via BoardGameGeek. 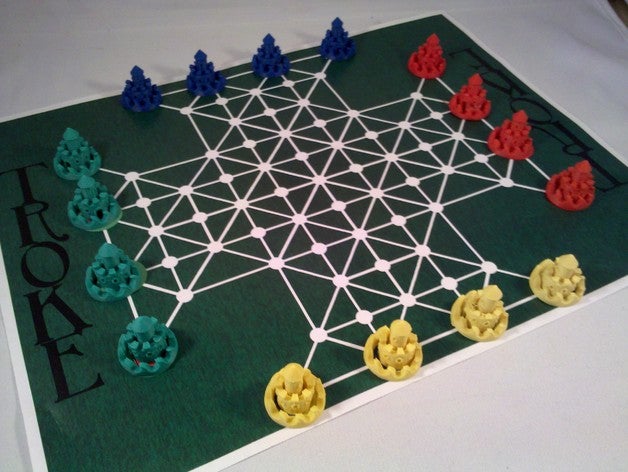 Troke Game Pieces and Board 3D Print and Play by cymon

If you like my work I hope you'll consider supporting me on Pateron: https://www.patreon.com/3DPrintingProfessor Subscribe to me on YouTube: https://www.youtube.com/user/mrjoesays EDIT: 3D Printed board available on Pinshape....

Yes, having someone else commercially 3d print for you is expensive. No two ways about it.

The .STL files commonly used in 3d printing have no units. The 3d printing community has eventually mostly converged on assuming millimeters, most of the time. And the more we assume millimeters, the more surprised we are when we find some STL files where the units are instead inches, or even some other unit. But they could be anything, including decimeters or tenths of inches. There’s nothing in the STL file to tell you which it is; you just have to be told. Or guess.

I see that cymon posted that on Sep 12, 2013. Older files are much more likely to be sized in inches. If it’s 25.4 times smaller than the original board game was, that’s exactly what happened. When you say “about three times” would 2.54 times be potentially accurate?

You can download a slicer (probably the easiest one to get started with is Cura) to visualize the pieces. Slicers have a scaling function, and you can scale by 2540% or 25.4 times. Some of them (at least slic3r, which is the one I use) have the ability to export a new STL. You could (one part at a time) load each of the parts in, rescale by 300% if you want only three times larger, or 2540% if my guess is right about full size, and then save new STLs. A slicer will normally visualize the part on a printer bed, with a grid laid out in decimeters, to help you visualize the size of the resulting part.

There are a lot of ways to scale STLs, this is just one relatively easy way. (Looks like the file the designer provided still opens in blender, but learning blender seems like the long way around; books are available, but it has a bit of a learning curve.)

Thank you. Clearly a lot of thought went into your reply. Unfortunately about 99% of what you said might as well have been in Japanese. I flat out don’t understand, and, after this very very bitter disappointment, I would prefer to give up. But it is a gift, so I guess I can’t give up.

But…if all you want to do is get a quart of milk from the corner store, should you have to learn how to hand-build an apollo spaceship to get there?

Life isn’t fair, the STL files were free, so I should not complain…but, Why?
That is what I keep finding myself asking now in life.

Yes, so much stuff, but designers live in this strange world where the causal user doesn’t exist.

My local library has 3d printers, and I went to the mandatory safety orientation.
There, I learned that it would take the machine something like 3 to 5 hours to print ONE two inch tall chess piece. And I learned that the demand for the printers is so great, I would only be allowed to use the machines about 3 hours per MONTH. Insane. Oh, the kicker is, they have printers, but no 3d scanner, theirs is “too old, we put it in storage, and the city is too cheap to replace it”.

Am I really too old for anything? I have lots of time on my hands, but that does not seem to make any difference. The GIMP free graphics software is free. There are forums. But…everything is so complex now that there is no way to use it. I would have to go back in time, be 20 years old again, spend four years in college, then use GIMP. It really is that abstruse.

That is the surprising thing. To me, if you design something you design it from the bottom up.
Software should be so intuitive that a monkey could use it.
But none is. Used to be, back in 2000 when I got my first computer. Not any more.

That intuitivity of software, quickly ends up at the basic knowledge of the processes and choice of tools which lead to what you want. A computer probably can handle .jpg files without problems. But a computer does not know what you want to achieve and no programmer can take all decisions of all users made in a life time in advance.
So back to the .jpg picture, you will have to learn what .jpg means… its a pixel format and cannot be increased in size without decreasing quality and you should therefore know, which resolution a .jpg would have to have to be printed in a good resolution (and what means a good resolution) in the size you are targeting for. How should a computer prevent you from printing big posters with bad resolution and ending up in disappointing results, if you exactly would like to do this.

… finally its the same problem with .stl files and dimensions as .stl are setup in triangular surface meshing elements, -which are, when printed in proper size - too small to desturb the eye too much. Printed in 5:1 or bigger, any rounding will be facetted and the part will perhaps have a total different appearance…

E.g. this dwarf is designed as low poly object.
https://www.google.com/search?q=bundesgartenschau&client=ms-android-samsung&prmd=nimv&sxsrf=ACYBGNR8RJ9lHIJ-bL02CD6LmVgthddG6g:1578518008554&source=lnms&tbm=isch&sa=X&ved=2ahUKEwiTnK_p9fTmAhVjwAIHHa8rCiQQ_AUoAnoECBEQAg#imgrc=AkDuv54HPZBOaM

But if you want to get it smooth in this size you would have to prepare the data in other way with some 10000 more triangles on the surface.

I downloaded the files and opened them with Windows 10 Print 3D app, which allows you to change the units on the fly and see it rendered on a grid with dimension markings. The sizes of the 3 parts are (roughly) ~18mm, ~8.5mm, and ~7mm.

If you changed the units to inches they become significantly larger than what is shown in the pictures of people playing the original version on the game site, but would be more in line with the graphic shown of the 3D printed pieces (but hard to say for sure with no item in view as a concrete size reference).

Also, the playing surface that is shown in the 2nd picture on Thingiverse seems to have been omitted–the STLs are not there, just a PDF (that is an 8.5x11 inch sheet).

What print service did you use? I’ve used Shapeways before, and IIRC, they allowed me to select inches as the input units on the pieces before getting the cost estimate for printing. I’d be surprised if the print service you used did not have this option, too.

However, if you felt they were expensive as small items in mm, then you would probably find them to be even more expensive if printed in inches (~2.5x more!).

This might be a good argument to buy yourself a 3D printer and print the parts yourself! 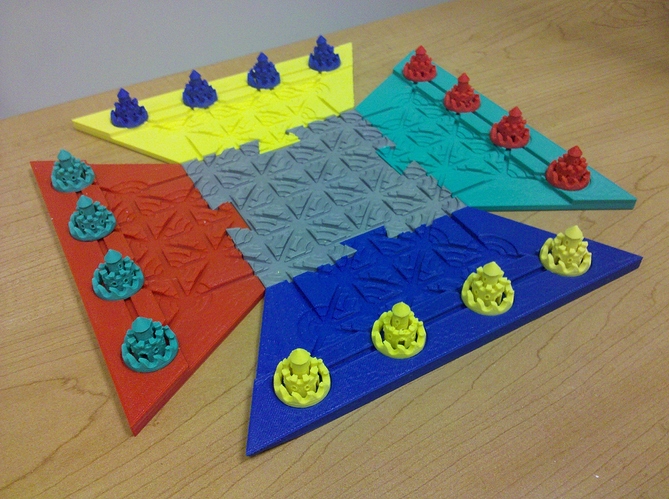 Download and 3D print this file (and many more) from Pinshape today!