I have what seems to be curtains in some of my engravings. I have followed a lot of instruction on how to eliminate this including completely and entirely redesigning my x and y axes to invert the belts so that the smooth side of the belt is rolling across my idlers. 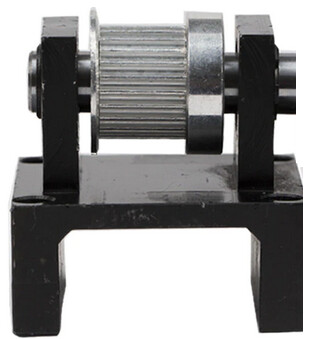 Hi, Not sure if this will HELP anyone, but it solved a huge issue for me. Look at the non stepper motor side of your belt, the idler pulley. Does it have Gear TEETH like this, like mine did? Then replace it with a SMOOTH pulley like this: ... 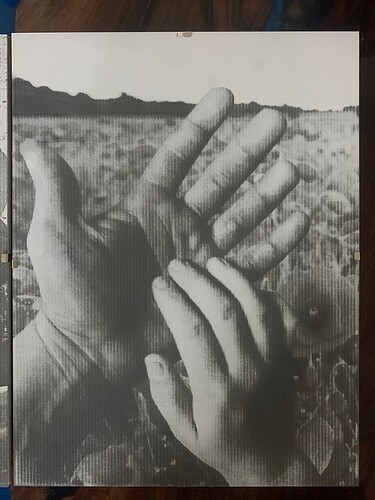 Hi all, I’ve been burning for a while and I can’t figure out why my machine is creating these evenly spaced lines within my photos. I am running a bachin 5.5w laser with grbl controller. Lightburn 1.0.04. My DPI varies from 0.13-0.09 depending on...

This does not seem to have changed anything. This is killing me because one day the laser will seem to be working great, and the next day every burn I do will have “curtains”. Even from burn to burn will vary.

Different speeds and different power levels all lead to some form or another of this problem. It doesn’t not appear that changing speeds or power changes much of anything besides how far apart the curtains are from one another.

I’ve gone back to my standard belt path because the inverted belt design didn’t seem to change anything and it is more complexity than I want to deal with.

I have attached some images that show the patterns showing up in different incantations.

I did this burn that resulted in some curtains… 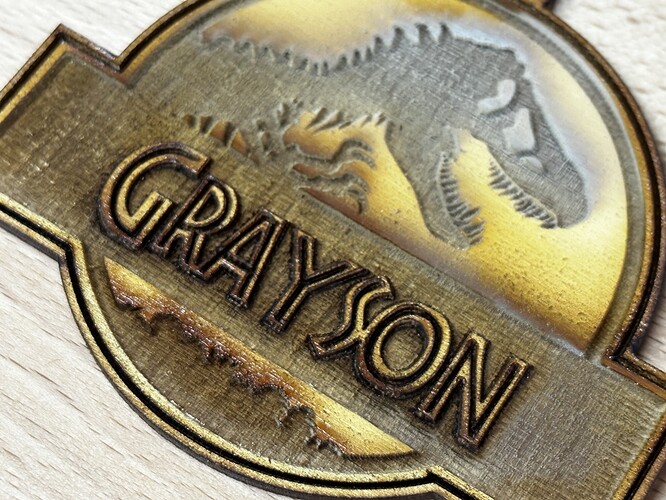 Followed by this burn immediately after which had no curtain’s whatsoever: 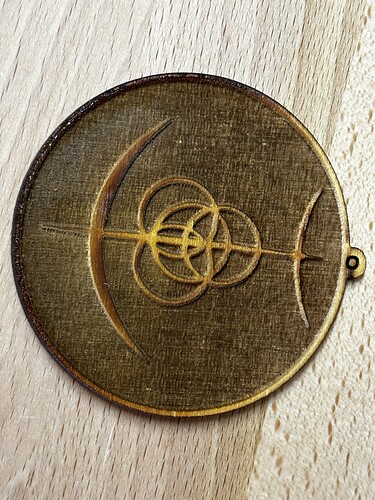 Here is the most intense curtaining I’ve seen come from the laser: 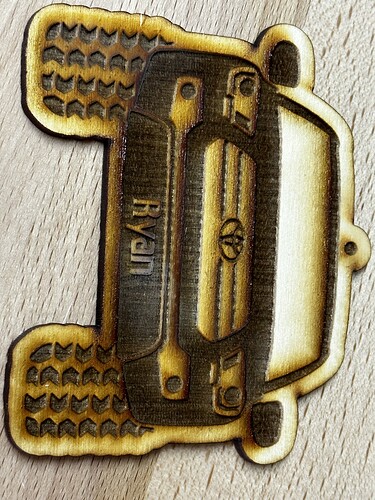 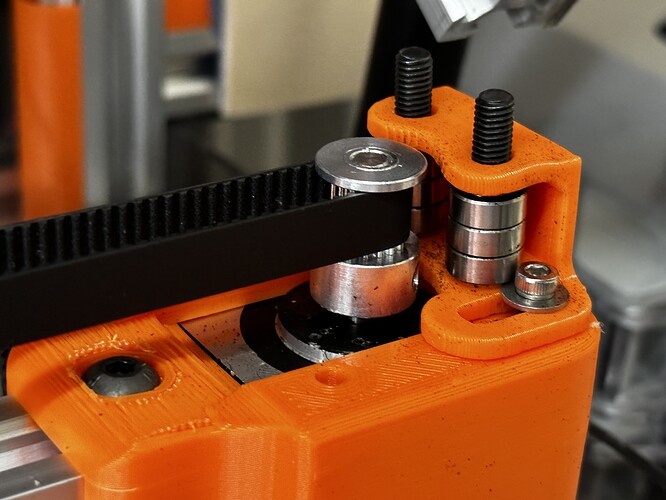 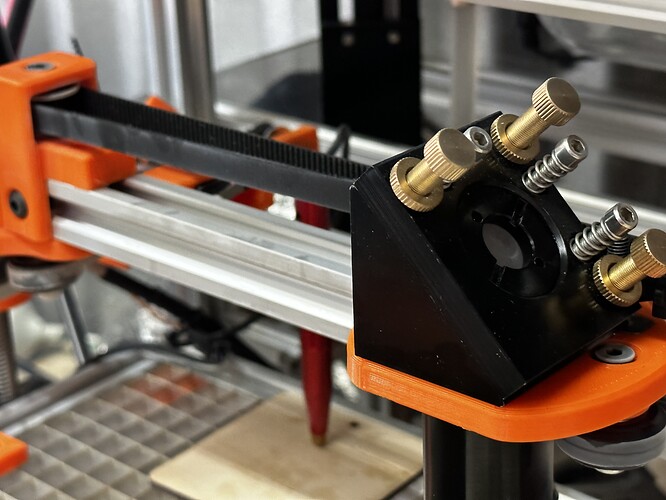 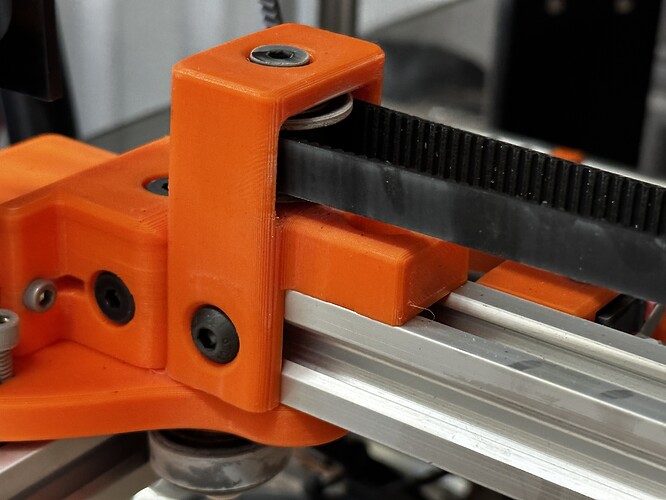 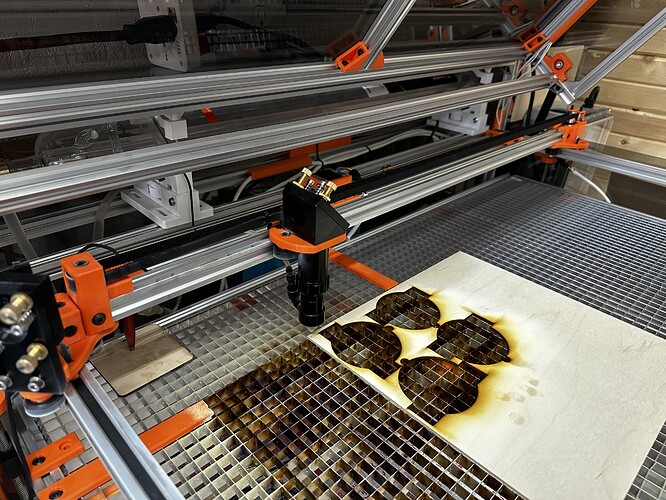 I’m using FluidNC on their hardware. I also have an arduino uno running grbl. I can easily switch between these two controllers. When I was initially building this laser I was switching between the two to help debug issues, but now have pretty much landed on the FluidNC controller because the 2209 stepper drivers can drive my steppers faster and quieter.

My only thoughts are the resonances this machine are creating are just so bad that I’d need a complete overhaul of the entire machine.

I’m at a loss. Any great ideas?

How much does your bed vibrate when everything is running?
I had a similar problem early in my laser ownership that I traced to an air pump I had sitting on the lower shelf of my laser bench. The 60Hz vibration was causing the bed to vibrate up and down while the laser was scanning side to side. This caused peaks and valleys as the work piece moved slightly within the focus of the laser. The peaks and valleys correlated nicely with the raster scan rate and was most pronounced when the rate was a multiple of 60.

Can’t at the moment find my old post about it. Removing the air pump from the bottom shelf of the laser bench solved the issue for me. The problem was also compounded by the expanded steel mesh bed I was using at the time as it had a bit of flex

Had an interesting observation with my machine today. Discussion

Had an interesting observation with my machine today. Was reverse engraving a small image on 3mm Alder and noticed these stripes forming in the engraved background. 15% power at 175 mm/s. The regular straight lines were puzzling and were not related to the grain of the wood. Checked all mirrors and lens and made sure everything was tight. Started the engrave over and the stripes where still there. Looked down at my airbrush compressor, which sits on the bottom shelf under the laser, picked i…

@James_Harding your LightBurn forum links just linked to the main page so I went did a search for “Cutains” and found this. I’m sure you probably saw it, but I’m just posting it here for anyone else that comes here looking to fix a similar problem. It appears to be a different cause then my problem.

Hi, Not sure if this will HELP anyone, but it solved a huge issue for me. Look at the non stepper motor side of your belt, the idler pulley. Does it have Gear TEETH like this, like mine did? Then replace it with a SMOOTH pulley like this: ...

@NedMan Thanks for the link to your other post. I was very optimistic because I have my exhaust fan mounted directly to the bottom of my laser bench. I have been considering unmounting for a while to see if this was the issue. Last night I pulled it off. I initially thought it was fixed! But I have been here about 15 times before so I kept burning and sure enough the banding came back.

That being said, I think I might be fighting more than one demon here.

I just took the bed out of the laser (it is attached to the frame and therefore could be vibrating due to any of the above issues). I built a tempororay bed out of blocks of wood and did some burns. Issue remains.

I switched to scanning on the y axis to see if I could isolate the issue to a single axis, it looks like the problem just followed the axis…

It’s hard to capture in a photo, but the lines seem to have gone from vertical to horizontal when I switched the scanning direction: 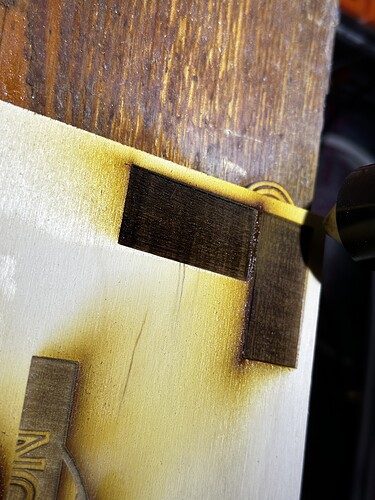 This is also very strange. Last night while doing some burns, one burn came out very nicely. After blowing it off with come compressed air, this seemingly perfect sine wave was revealed. This one is a mind bender for me. No idea what to think about it.

The wave form makes me wonder about broken cords inside your belts. Do you have steel core or fiber core belts?

It appears to be fiber to me. The amazon product page doesn’t say, there is one question that is asked that happens to be if it is fiber or steel. It looks like a customer replied saying fiber.

A sampling of the variation that I see in my “curtaining” 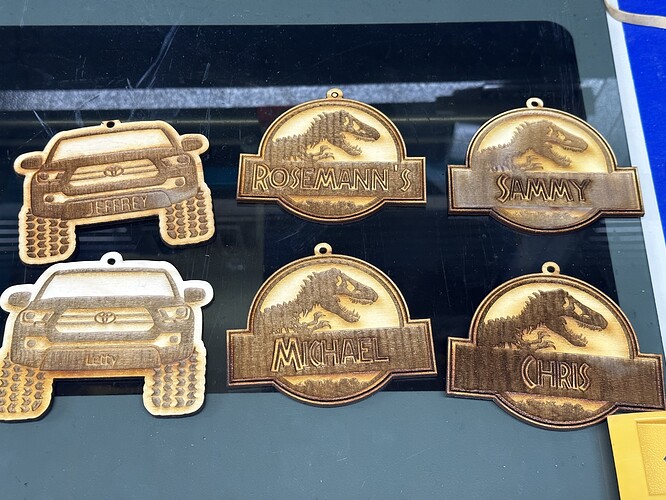 It’s pretty obvious when you cut timing belt with steel cords in it, so you would have noticed. Less likely for fiber cords to have broken. That’s probably a red herring, sorry! I’ll go back to lurking…

If this is plywood you are using then engraving too deep will get you into other layers in the wood which can produce some strange artifacts.

Here is a piece of pine showing it’s own incarnation: 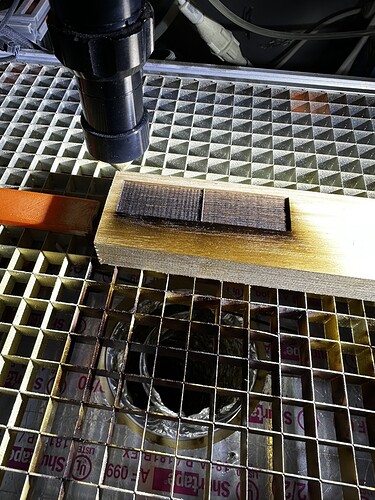 make sure there is absolutely no slop in the lens tube and make sure the lens is held in place with an o-ring with a little pressure on it(so no wiggle).

If everything is tight, I would start looking at firmware settings or drivers to see if there’s any accelleration limiting going on and causing the oscillation.

The sine wave thing is odd but as was mentioned, it is likely in the wood since it does not show up anywhere else. I would also troubleshoot this using a standard rectangular engraving instead of any design so consistency can show effects of changes better.

Thank you everyone for jumping in, I really do appreciate it. This community is awesome.

@dougl I cleaned my lense and check the o-ring to ensure it was secure. 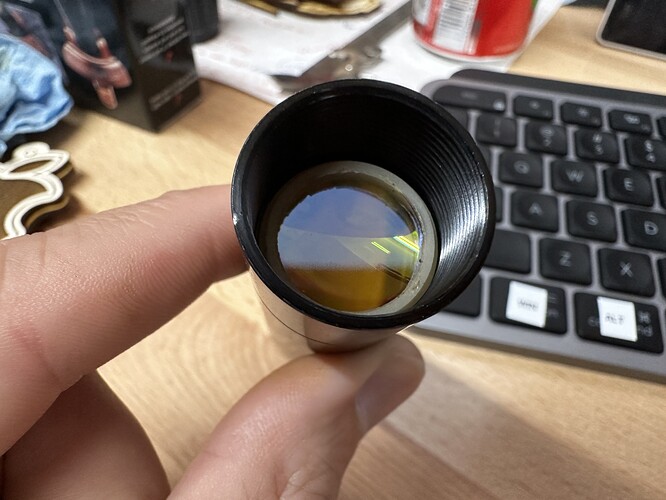 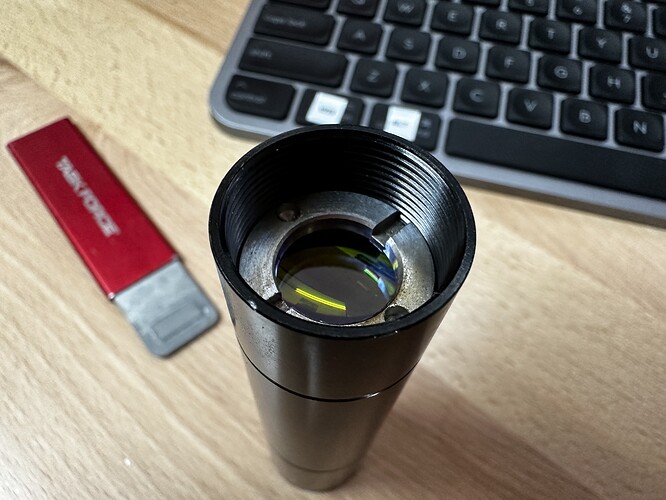 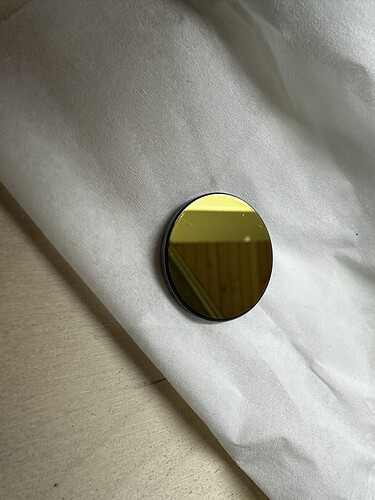 Everything is as secure as it can be. I have a K40, my first laser, and that thing is wobbly. I mean how can this flimsy piece of metal hold that mirror stable?? The K40 doesn’t have this type of pattern going on. What an amazingly cheap piece of tech that just works. 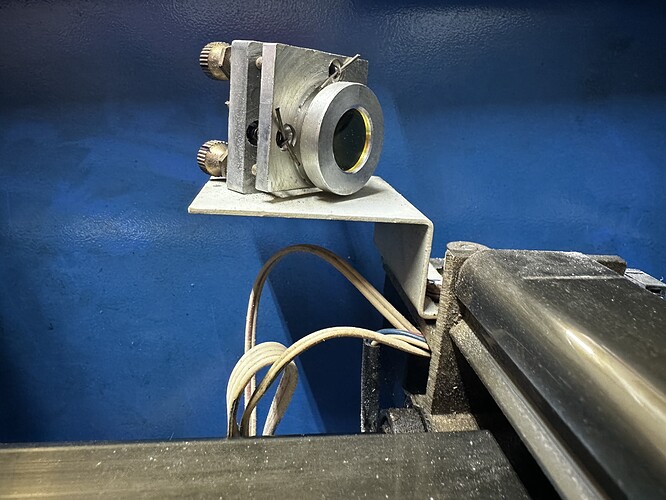 Here are the settings I have setup for FluidNC.

I don’t think my acceleration values are out of the question. As a matter of fact, the image in one of my prior posts that I engraved on pine (just a square) I had adjusted the acceleration down to 1000 mm/sec2.

Sorry for this, the forum wouldn’t let me upload a text file???

I would be slowing things down and testing to see when it starts. Also would be feeling or listening(wood dowel on frame and ear while it’s running) to see what’s up. Maybe put a mic on it and record then look at the sound on a fft display in a sound file editor.
All after I looked at each and every part of the laser path.

AS for the K40, it can hardly run over 150mm/s stock so it seems that is rigid enough at those speeds. Add a bunch of upgrades(Russ Sadler) and you can get 800mm/s but only scanning along X axis and upgrades include better mirror mounts and MUCH lighter laser head.

I took my speed down to 60mm/s and acceleration to 500mm/sec2. This is really really slow compared to where I was at. The pattern is still there.

I was running a plain square job to see the results. I did end up running the job a few times with the laser off so I could feel around and look around. At one point I put my hand on the second mirror. It is a very low hum on it. This is was made me turn the speed and acceleration down. I can’t imagine that mirror ever being entirely separate from the x axis as it must move with it to bounce the beam.

I bought a cheapo diode laser and have been thinking about mounting it to the x axis and burning some squares. This would help me eliminate the mirrors as a source of the problem. If the pattern emerged with the diode, then I could say it’s not due to the 2nd mirror vibrating.

Any thoughts on how to isolate the 2nd mirror from the x axis’ motion system and the resonant frequencies it creates?

A strange observation. In my new laser, I call the big laser, the plasma beam that I see formed inside of the tube randomly changes orientation as it blasts out the end of the tube.

I fired up the k40 just now cause I have orders to fill and I decided to watch the laser tube. I attached a video that shows fairly consistent beam formation, very different from the big laser.

You might be testing with the same file but the controller firmware are very different and therefore what the laser is doing is going to be different. But you might have found that the firmware on the big laser is what’s causing the problem. A common firmware might be enlightening.

I have had the same hardware on both the big laser and the K40. An Arduino Uno with CNC Shield running GRBL. With this setup, the same issues arise…

Let me put it another way, since you are using buffered type firmware and they are not the same, comparing what one firmware is doing at the laser to another firmware isn’t going to tell you much when you see variations.

But if that is indeed true, ie it was doing the SAME banding marking when running the same GRBL firmware then it’s the hardware or maybe the LPS. There have been some odd things happening with some LPSs in certain power ranges( usually low teens ).

Can you point to some more information about the odd behavior of the LPSs? I’m leaning hard towards the laser and laser power supply