Hi
I have recently bought a Chinese laser cutting machine which works quite well. Here is a picture of the machine: 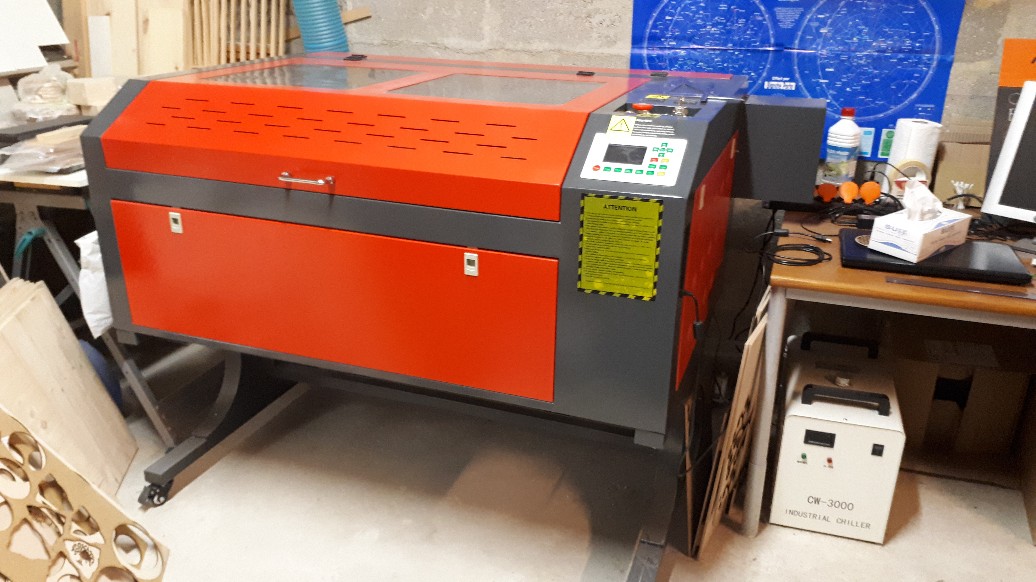 However, when cutting plywood or acrylic, the smell is quite high and I believe it’s not healthy to breathe the vapors.
So I’d like to change or upgrade the exhaust fan. The wall output is 2.5m higher, as the machine is undergournd. 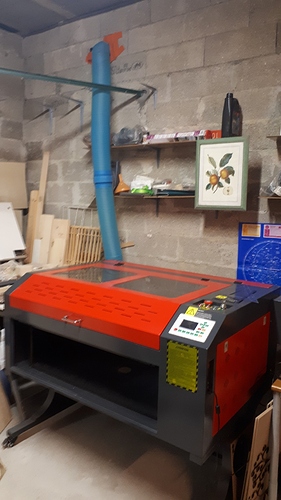 The machine is equiped with a small fan, see below: 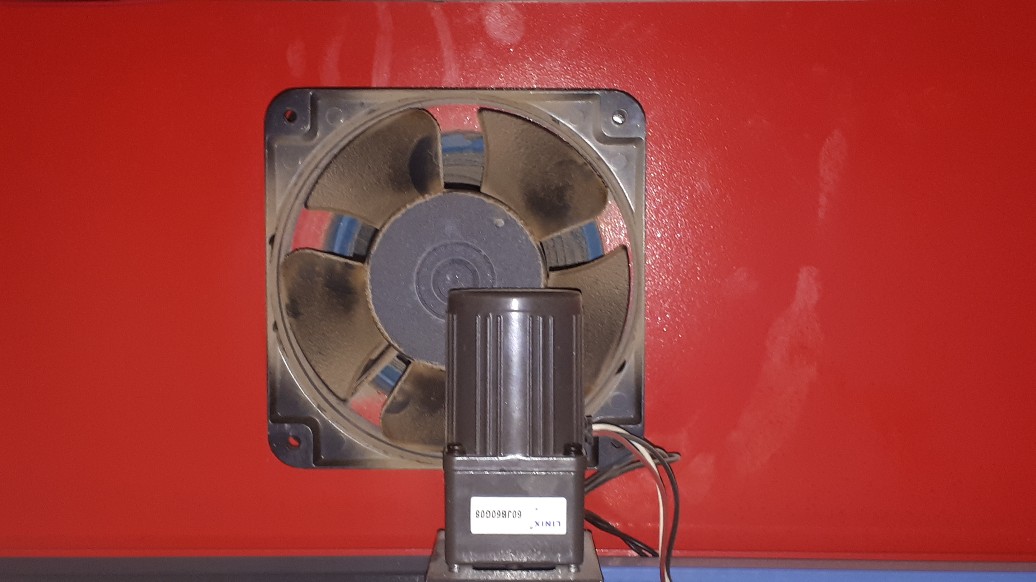 and I don’t think it’s powerful enough.
The output and hose diameter is 6" - 15cm.

I’d like some advice before I buy the new fan. My concerns are:

I’m thinking of buying this kind of fan: 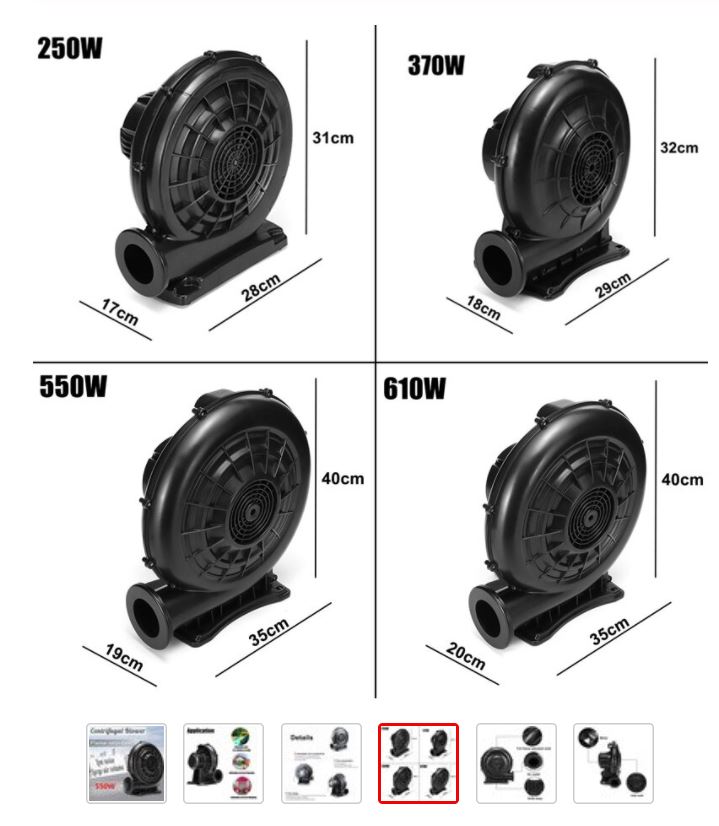 The price is around 80€. Any advice on this kind of product?

Thanks a lot for your help

The fans you have found have no input flange. Have you considered a centrifugal duct fan instead? Should be similar in price, but it’s designed to work in a duct so you won’t have to make something up to fit it to the duct. Also, the fans you found are loud (~90dB isn’t quiet); you should be able to get a quieter duct fan.

I would remove the existing muffin fan entirely. It probably doesn’t matter one way or the other, so why keep it?

Two other things I notice in your pictures:

I would use a fan like this: https://amzn.to/2YSC4UH you can get them in 6" & 10" diameter.
I use this fan https://amzn.to/2EXDUMY and it is pretty quiet. It’s not available on amazon just now.
You can place this fan anywhere between the machine and the wall opening.

For heavy usage and longer runs you want a smooth path so minimize the use of corrugated material. A heavily used machine will deposit soot on the exit surfaces, especially corrugated material. Only use a flexible pipe for the connection between the cutter and a wall plenum (stack duct) and minimize its length.

I would build a rectangular metal plenum (stack duct) that has a hole at the bottom, is fitted to the wall, and then exits through a hole out the block at the top.

You can build the plenum out of sheet metal parts normally used for central heating and air. 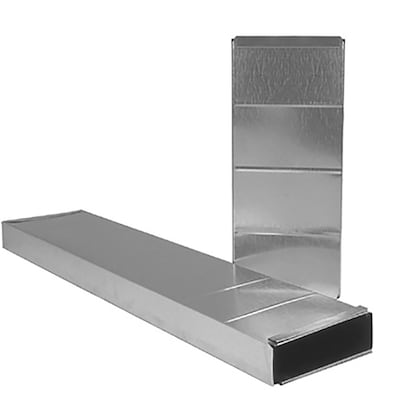 Shop imperial 3.25-in x 10-in x 36-in galvanized steel stack duct in the stack & trunk duct section of Lowes.com

You can connect from the machine to the plenum using a flexible pipe like this https://amzn.to/2YXjwCK

Fan placement isn’t super critical, but if you place it closer to the end of the ducting then any leaks in your ducting are under negative pressure and will pull air in rather than push exhaust out.

Also recommend removing the old fan. Serial exhaust fans are not additive. The old fan would most likely impair the performance of the new fan.

Thanks for all your answers.
A few additional information:

Now for the new fan. I hadn’t noticed it was so loud. It’s good to know there are others less loud than this.

The fans you have found have no input flange.

What’s an input flange? The small part to connect the duct to?

I’ll search a centrifugal duct fan, I expect it’s also what Don suggests? Those are relatively cheap, but the shipping cost to France is too expensive, I’ll try to find some others.
I’m not familiar with imperial units, what power or output flux should I choose? I mean the ‘cfm’ thing…

It’s basically fraud that people list the CW-3000 as appropriate for any laser, let alone a high-power laser. Whether you need a CW-5000 or CW-5200 for a 100W laser probably depends on maximum ambient temperature.

What’s an input flange? The small part to connect the duct to?

Exactly, there was nothing there for the input to connect to. It is clearly meant for blowing but it assumes that the input is in open air.

I noticed when I searched amazon.fr with my very rudimentary french that I couldn’t find centrifugal duct fans.

A radial duct fan will have a bulge that is a manifold into which the air is blown and from which it is directed to the outlet of the fan. 6" should list ast 150mm for you; the nominal sizes are close enough to 25mm/inch in this range and they tend to round.

You can just compare watts and efficiency and ignore CFM, I expect.

I don’t know how much lower you could go than 440 cfm, it depends on what you are cutting and the impedance of the ducting. I would get the largest cfm you can afford and are willing to listen to.

I don’t know if getting one from amazon prime solves your shipping but this inline fan might fit: 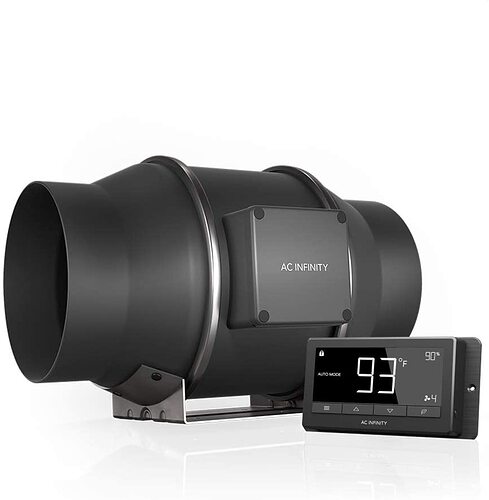 Thanks Michael
The cutter is in an underground garage, so the temperature stays roughly constant around 20°C. 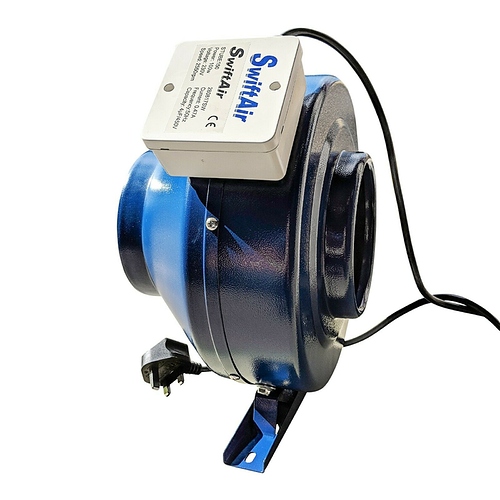 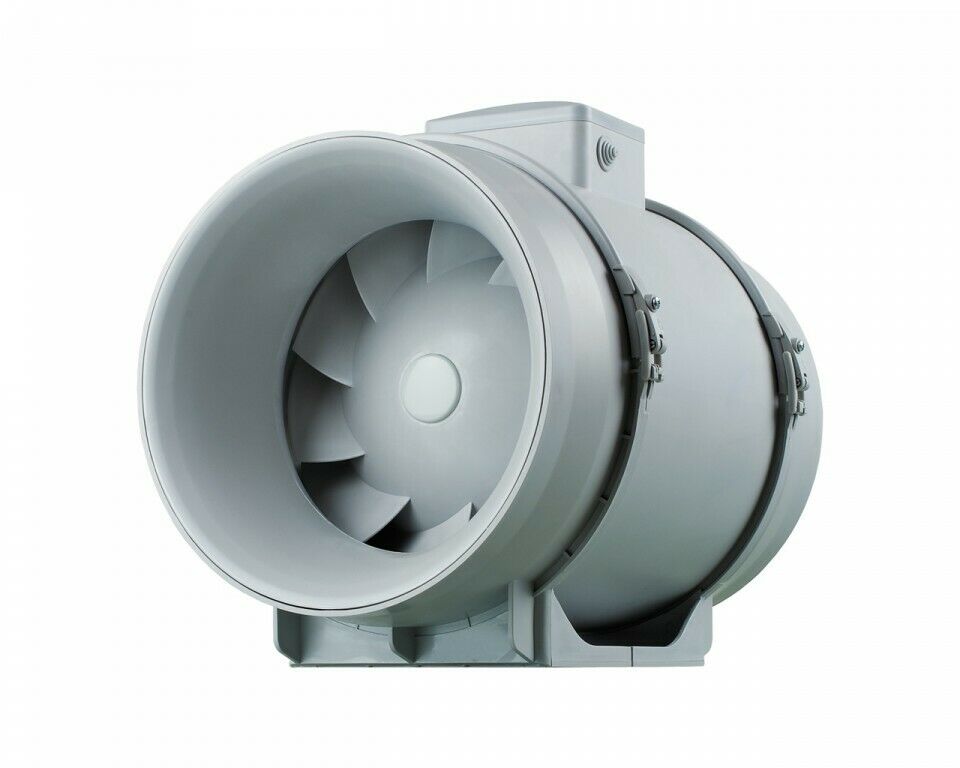 I think the swift air.
It looks like it has mounting flanges and its a little more powerful.
Insure that the flanges match whatever ductwork you plan on implementing.

@donkjr that one is axial, not radial/centrifugal, and there are axial fans available on amazon.fr — here’s one with a synchronous AC motor that at 50Hz pulls 54W and is speced to 410m³/h == 6.8 m³/minute or about 240 CFM — but given that the one you linked to pulls only 38W and is speced at 402 CFM makes me think that the method of specification are under different impedance conditions; the US spec might be in free air and the EU spec under some nominal impedance or something like that. Watts ought to be roughly comparable for air movement. 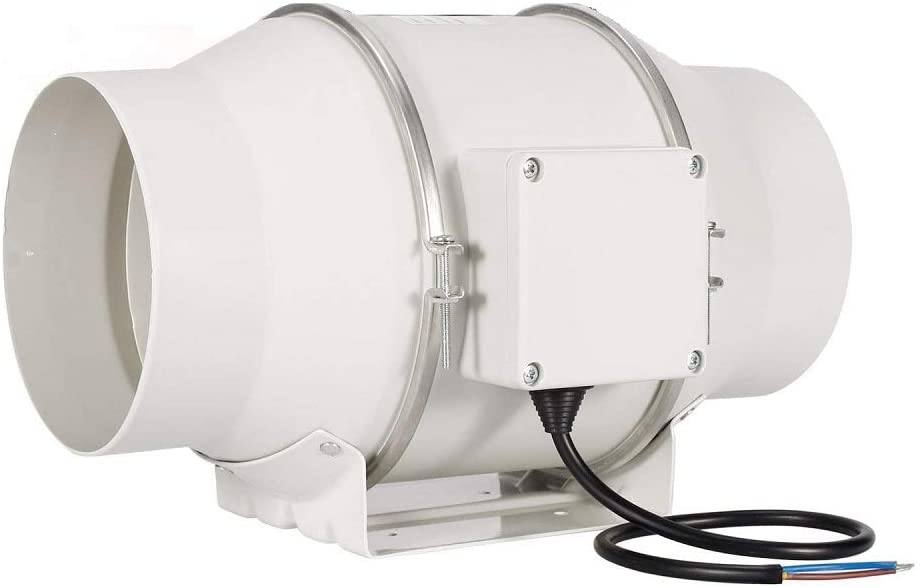 Note that buying a 120V fan for the US market, especially one with a synchronous motor speced for 60Hz, is not going to work the same on 50Hz 220V in Europe.

The cutter is in an underground garage, so the temperature stays roughly constant around 20°C.

That might be saving you so far. Usually the CW-3000 will stay a few degrees warmer than ambient, so you might be running ~23⁰C water through your laser, which might be in spec.

My shop is underneath my garage, underground, but here in North Carolina, USA the shop is definitely warmer than 20⁰!

The SwiftAir definitely looks like a typical radial blower; the white one is axial and looks optimized for velocity over volume. 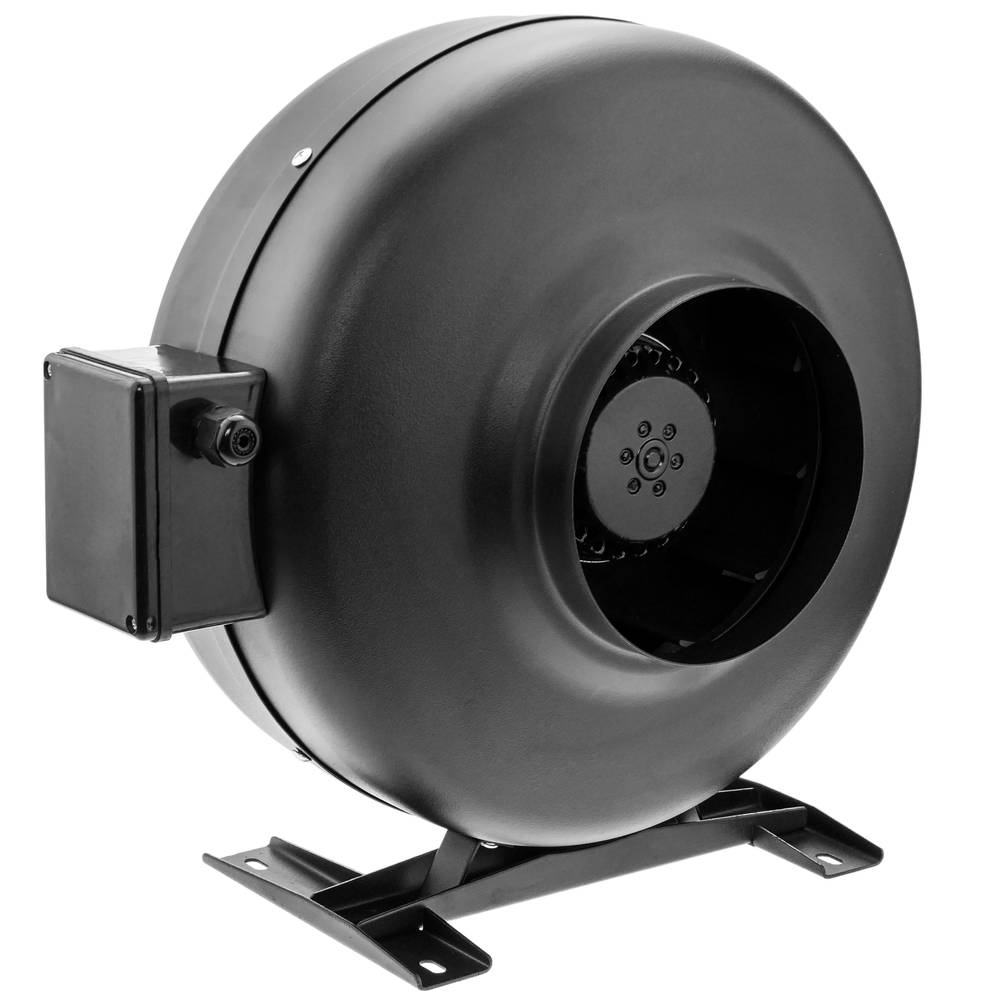 What does this mean? More precisely, should I priviledge volume against speed?

More precisely, should I priviledge volume against speed?

Yes, I believe so.

I don’t remember impedance formulas, but rule of thumb is that axial fans won’t actually move air through much of a pipe. On 3d printers we typically use radial fans even to push air even through a short 20–30mm long tube to cool the plastic being printed.

I’m hoping that one of the engineers here remember the formulas involved. I’m a programmer and have forgotten some details from physics class so long ago…

That might be saving you so far. Usually the CW-3000 will stay a few degrees warmer than ambient, so you might be running ~23⁰C water through your laser, which might be in spec.

My shop is underneath my garage, underground, but here in North Carolina, USA the shop is definitely warmer than 20⁰!

Yes, the temperature display shows that water temperature remains between 23 and 25°C, sometimes up to 26.

I’m a little bit confused, I don’t clearly get the difference between axial and radial fan. To me, both the white and the Swiftair are axial, as the air always flows parallel to the rotation axis of the helix. 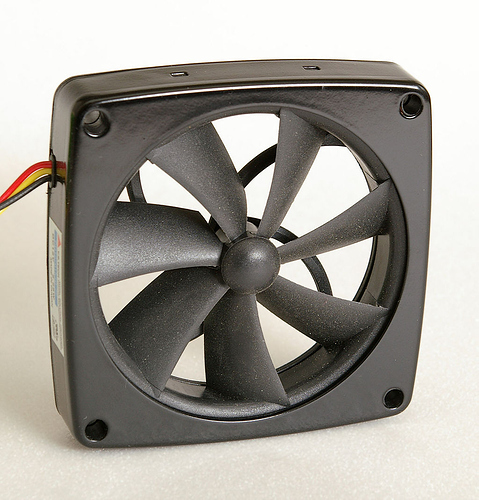 The centrifugal fan is well explained on Wikipedia:

Is ‘radial’ the same as ‘centrifugal’?

Do you mean I should consider the radial / centrifugal fan, knowing that the hole in the wall is 3 meters away?

To me, both the white and the Swiftair are axial, as the air always flows parallel to the rotation axis of the helix.

The real difference is the orientation of the blades, and the air movement I’m talking about is the movement immediately across the blades, not where it is eventually directed to.

The SwiftAir at looks like a common design that moves the air centrifugally / radially out into a manifold and then directs it downstream.

The wikipedia page is right, but imagine that instead of one exit path at a right angle to the input air flow, the air is collected in an outer manifold around the entire impeller and then directed in the same direction it came in. I don’t have a cutaway to show it, but that’s why it is so much wider than the intake.

In the ebay listing, you can click on Lire la description complète and it is clear that it is a radial fan. The input duct is connected on the flat side. It pushes air out from the center (that’s why it’s so muc wider) into the widest section, and then the cone on the exhaust side carries the air from that wide outer section to the exhaust duct.

Does that help any?

Do you mean I should consider the radial / centrifugal fan, knowing that the hole in the wall is 3 meters away?

The impedance happens no matter where in the duct the fan is, so it’s merely the length of the duct that makes the radial fan best.

Here is a nice simple explanation with charts and graphs!