My wife, a mathematician, wants to keep track of what she spends her time on, and was inspired by Fred Brooks’ time-tracking clocks: 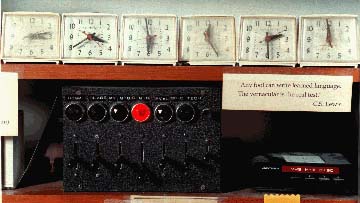 She saw that there are time-tracking cubes available that connect to your phone and have apps that log which of the six faces is up, so that you can keep track of up to 6 different tasks. But she had a problem. She had at least nine things she wanted to track, and any mathematician worth her salt knows that you can’t stuff nine pigeons into six pigeonholes. And she wanted to track her time in google sheets where she could easily do her own analysis, not in a cell phone app.

The simplest platonic solid that has at least nine faces is a dodecahedron, so she thought a time-tracking dodecahedron would be great. Could I make her one?

Perhaps rashly, I said that sounded easy enough. 3D print a hollow-shell dodecahedron with a removable lid, put an accelerometer, single-board computer with WiFi, charge controller, battery, and inductive charging pad inside, a few lines of code, and hey presto the project is done, right? Right? 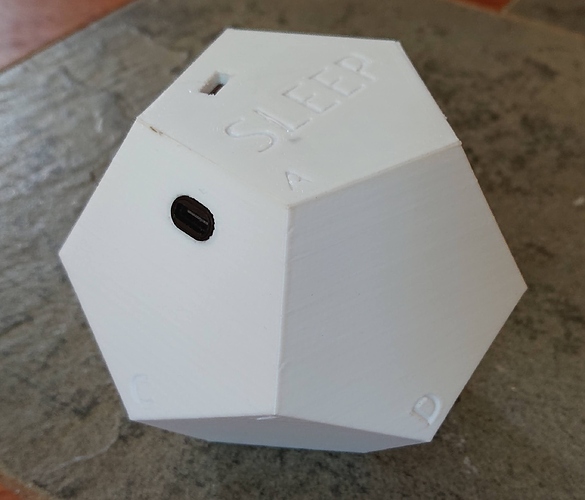 The Arduino sketch is awful. I cut and pasted some examples together with a little bit of glue code and stopped as soon as it worked.

If you want to track time too, you can. Arduino sketch, BOM with amazon links, and Solidworks, STEP, parasolid, and STL files for the shell. Probably you can make something work. (But you might want to check back in a few days before you print the shell, because I haven’t yet printed my latest design iteration; the picture above is of the first iteration, and there’s a possibility I’ll have to tweak the design if it doesn’t fit when I print the second iteration.)

I printed the new version of the shell. The CPU board is a perfect fit in the slot. I used 3M fiberglass-reinforced strapping tape to tape the battery in place, and the only problem is that it sticks so well to the PETG that I had trouble maneuvering the tape into place to hold the battery. It kept sticking too well before I even got it in the right place, and I went through several strips of tape before I got it right. I ended up using philately tweezers to position the tape. (They are the only remnant of a hobby I tried for a few weeks in grade school before coming to my senses, but they keep coming in handy for other purposes.) 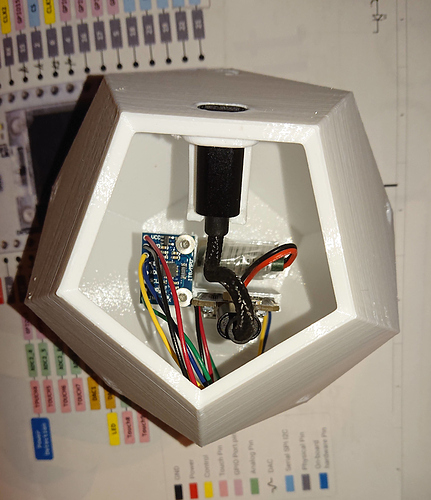 The feature to hold the USB-C adapter cable is just about perfect. I still had to file out some printing artifacts to make it fit, but I’d rather do some light filing than have it too loose.

Popping off the top of the first iteration of the shell was surprisingly easy; it was firmly attached, but pried out easily and without obvious damage. It could take more cycles without harm.

I popped the LED off the breakout board, but it as expected didn’t make a measurable difference in current. The main point there is to last longer once it stops reporting to preserve battery life, anyway.

On the lid, I did trim off the corners of the retention “lip” to make it snap into place easier, so I should make that tweak to the design as well. Other than that, though, I’m really quite happy with this.

If I get bored with other things and come back to it, I could have it try to pick up current time, and store logs on the local SPIFFS filesystem if it can’t reach google via wifi; right now it would just lose data. But I don’t see any need for that right now, so I’ll work on other things.

It turns out that if it runs low enough on battery that it turns off all sources of interrupts and puts itself to sleep, plugging it back in doesn’t wake it up. I had to pop the lid and press the reset button to get it back. Maybe I should have incorporated a recessed reset button in the design.

Now when it goes into low battery mode, it wakes up once every five minutes to check the battery voltage, though it won’t do anything else until that recovers.

(I spent a little while debugging the google sheets web app script trying to figure out why it was no longer recording data before I realized what had happened. I had had a bug in the script that caused it not to record any data for a while, including while the battery drained down and it went very much to sleep.)

If you would like to track time in a spreadsheet using the TimeTurner, I wrote a google apps script that seems to be working. If it breaks you get to keep both pieces, but here are the step-by-step instructions. At this point, I think this project has all the information in it that you would need to be able to replicate what I’ve done.