Thanks to the fantastic @Eric Lien I now have a functioning Eustathios V2! I'll

Thanks to the fantastic @Eric Lien I now have a functioning Eustathios V2!

I’ll post some better photos later (wife has the camera), but I have to say that it is SO much easier to assemble when you start from accurate parts and Erics parts are absolutely lovely, I almost thought they were molded when I got them out of the box.

Anyway, once I am fully functional and have my heated bed installed I will be offering up a set of Eustathios V2 parts for the Print It Forward program. However…(of course, this couldn’t be that easy could it!).

Anyone experienced a temperature drop using an E3D V6 hotend? I’ve PID autotuned on the smoothieboard and updated my values appropriately. The hotend reaches 200 degrees in about a minute which is awesome using a 24v cartridge from e3d. However once the print starts the temperature drops a good 20 degrees down to around the 180 mark and won’t climb any further.

I thought it might be the powersupply but thats not even working all that hard, the fan isn’t even coming up and its a Jameco 240W 24V supply…is that enough? Did I screw up my math? Or is my smoothieboard just a bit pants? I do suspect the power supply as I noticed when printing smaller areas where the movements were less the temperature rises again.

The hotend is connected to the smoothieboard via 22AWG wire and its warm but not hot. 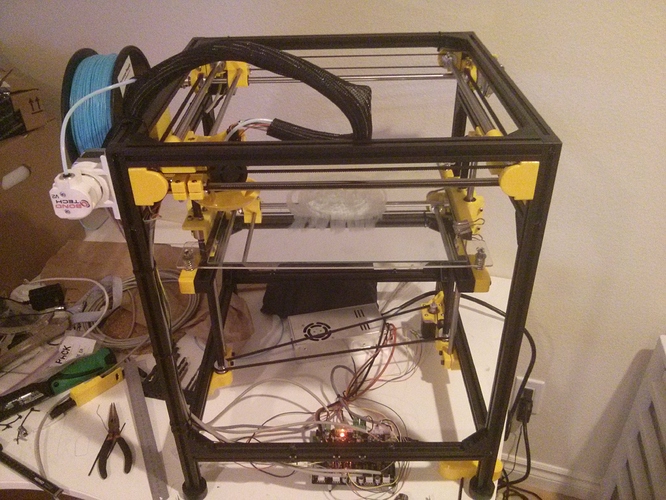 I had the very same problem. Check that you got the right heater cartridge from E3D. I had two V6 from them with a supposedly 20W cartridge that underdelivered and after complaining they sent me two 40W cartridges. Measure the resistance of the cartridge and compare to the ones quoted on the V6 assembly page.

Hmm…its reading 27ohms at the smoothieboard end. I guess thats probably close to 20W, they also have blue leads so are 25W heaters I guess. I wonder if I failed to select the 40W option.

As far as I know they supply 20W by default but I have read many people having issues with that and switching to 40W.
Try heating up without printing and then turn your fan on. Mine couldn’t keep 180 degrees with the fan going even when not printing. With a 40W cartridge it works well even at higher temperatures.

Hmm… I may just order a 40w heater off amazon so I can get it by the weekend.

Just ordered a pack of these https://www.amazon.com/gp/mobile/dp/B00SUYVLYC/ probably rubbish but worth a shot to have something to play with over the weekend.

Wow, 20watts. That seems much too low. One note is pid auto tune doesn’t work on Smoothieware (IMHO). I had to tune mine by hand to get stable temps. Also I would use heavier gauge on the heater when you put on the new cartridge. If the wire is warm at 20 watts, then 40 watts might be unsafe.

hmm guess i have never gotten 20W ones from E3D and i ordered quite some v5 and now some v6 (also the 24V ones). I haven’t seen anything below 30W from them (i think it was 30W back with the V5 but unsure - maybe also 40W there)

What wire gauge is everyone else using? Not sure I can get greater than 22awg into the microfit connector.

24 for all small components. 18 for heater and powering azteeg controller and heated bed

Hmm. Maybe I’ll just give up on the connectors and solder them they seem unreliable anyway. I have 8x 22awg being run up to the hot end in two 4 conductor cables and an additional 24awg pair for the variable fan. So I could bundle up 4 of the 22awg and use those for the hotend then the other 4 for the always on fan and thermistor.

So I installed the cheap 24V 40W heater from amazon this evening. Much better, temperature is still bouncing around a little but now its oscillating from 199-201 with a 200 target so thats much more like it. Guess I just need to manually tune the PID values now, really beginning to dislike this smoothieboard.

Everything is awesome about smoothie except auto PID

@Ben_Delarre smoothie is great, only issue I had was the PID auto tune issue.

Especially the comments by Triffid Hunter:

the D term opposes oscillations and causes the heater to turn off early during warmup to prevent overshooting.

the I term causes the temperature to slowly move towards sitting right on the target instead of below or above it."

Hmm interesting…I’ve definitely had an overheating problem. While the board was sat on my table it really got quite hot, hot enough I couldn’t touch the driver chips. Had to put it up on some spacers to get some airflow underneath it to keep it from getting too toasty.

I’ll give that PID adjustment a try.

@Ben_Delarre I have a fan designed into the lower skirt on V2, if you don’t have a cooling fan for the board I recommend it.

Yeah I’ve not mounted the skirt yet, I have some fans I can fit probably. Got to cut some holes in the acrylic bed to mount the smoothie onto. Also need to print a mount that fits it and the Banana Pro I’m going to run it all with.

Next up is restoring the Shapeoko 2 to its former working glory and cut the aluminium bed!