Smoothie 5c hangs on power up

I finally decided to replace the MKS Sbase board in installed in my K40 last year with a version 1.x 5 channel smoothie board sourced from eBay a month or so ago.

I am waiting for the version 2 board I signed up for as part of the kick starter to show up, but I bet the “virus” has put a dent in the schedule on that being released.

Change over went very will, little to change other than the connector ends for the limit switches and to add a 5V power supply to power the RepRap discount display that was installed in the machine last year.

Problem is, about 50% of the time when powered up the smoothie will not start and I get a continuous tone from the display board.

If i press the reset the board will come alive and run. Once up and running the laser works flawlessly. Powering it down and waiting until the power LED on the board goes out it will start with the same percentage of chance.

I am pretty convinced it is a power supply issue, but before I order the specified 5V regulator and eliminate the separate power supply, I figured I would through the question out here.

I would monitor the supplies voltages with a DVM at power up… to see if that provides a clue.

That is very odd, I have never seen that before ( and I’ve helped a lot of people with smoothe stuff ) …
If you have a FTDI cable, hooking that up to the UART port and monitoring debug output might provide a clue. Otherwise, yes I’d try improving things on the power supply side of things. At least measure it and tell us.
( also thank you so much for getting a genuine board

I found the “approved” regulator on Mouser and I had a cart full of other items to order so will get and install it, eliminating the separate PS.

The controller saga is somewhat long and painful. When I got the laser, I knew right off the bat I needed to dump the original controller and the lame Corel for something better and Light Burn.

Smoothie was my first choice, but at the time none were available in the type/configuration I wanted. The other clones were pricey. I also knew of the V2 in the works and decided to go with the cheap (in MORE ways than one) MKS Sbase board and use it for a big 3D printer build when the V2 showed up. The MKS was never planned to be anything but a temporary to get some use from the laser until the preferred board could be had.

The MKS has had a number of annoying issues not limited to freezing at random times and having rapids that my 99 year old grandmother could outrun in her walker.

When V2 got delayed, a friend found some V1 5 channel boards on eBay for a really decent price and we bought a couple. Plan is to swap the V2 in when it shows up, use the V1 for the 3D and pound the living crap out of the MKS with a large 5lb hammer (2.26796 Kg for the rest of the world).

Looking forward to the V2 when it shows. Keep up the good work!!

Well the “official” voltage regulator showed up and has been installed.

Unfortunately it made no difference. Still hangs with a continuous tone and a lighted display only until you hit the reset button. Hangs about 50-60% of the time. After hitting reset everything is fine.

35+ years of doing driveability and computer diagnostics on cars prevents me from just wiring an external reset button that is easy to push.

Voltage input to the controller was checked to make sure it did not exceed 24v and has been set to 22v just to be on the safe side.

edit One thing that popped into my mind (of course after hitting send) was could it be the GLCD hanging? Too tired to go back out and see it LightBurn can see the controller despite the display being blank.

I meant measuring the 5V power. Though if you now have a vreg that maybe doesn’t matter that much.
Also please measure how much current the board is consuming on the 5V line.

Also try removing the panel altogether and see if the hanging issues stop.

with the installation of the “official” 1a voltage regulator onboard I believe voltage is a non issue.

After posting last night I went out and unplugged the GLCD cables and the board boots normally and repetitively.

I am not sure if there is a preferred source for these GLCD panels, I plan on sourcing a different brand

Some GLCD’s ship with one of the cables reversed. This my be the issue with yours. I know Cohesion3D.com sells quality GLCD panels on their web site.

I am familiar with the connector issue. I currently have three of these panels in use, two have the backwards connectors.

If they are backwards you get the same effect (back light and tone only), however pressing the Smoothie reset button will not bring it to life.

On this installation, pressing the reset boots the board and it works normally.

Thanks, I looked at the Cohesion site and they are back ordered.

I found one on eBay that is from a different maker and have it headed my way. I will need one for my huge 3D printer project that’s in the works, so I have no issues with tossing one at the laser to see if that fixes it.

Reprapdiscount and Panucatt are trusted sources of quality smoothie-compatible GLCDs. Cheap chinese screens do cause all sorts of weird issues, we see them being mean to people on a regular basis.

Well, I have one ordered, same red board marked reprapdiscount but with a different name silkscreened above.

I had looked on the panucatt website but the format of the displays they sell would require me remaking the main panel of my unit. 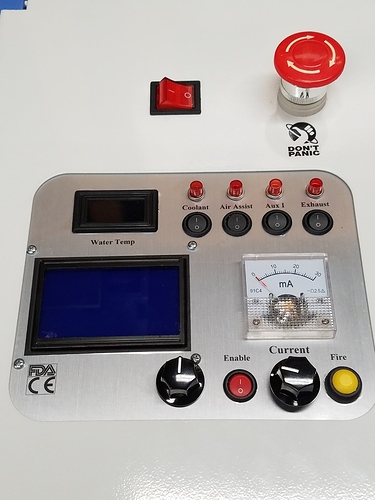 Will post the results, it is supposed to show up mid week.

Genuine reprapdiscount boards are white, not red.
This isn’t about getting a specific design, it’s about getting it from somebody who manufactures and tests it correctly ( ie ordering directly from reprapdiscount ). If you buy it somewhere else it’s probably a counterfeit, and you will possibly regret it the same way you are regretting the original order.

Never seen a white one. All the search results coughed up red (mostly) and some darker colored ones.

Found the official one and have it ordered. We’ll see what transpires…

Ok, the real deal arrived. Do these need to have some sort of firmware update in order to run? No documentation was included and the display back light comes on but nothing else.

I have searched the RR site for any firmware information and all that i find points me to the Marlin site.

Cloned glcds have their connectors rotated 180 degrees relative to the real glcds, so if you go from one to the other you’ll need to pop your connectors around.

That’s not the issue here as I was testing the new display using the cables supplied. So I have: Smoothie 5c, Uberclock display adapter, 5v 1A regulator on board the Smoothie, genuine RRGLCD.

I had some time last night before calling it a day and started walking through the diagrams and discovered there is nothing to flash on the Display/Controller itself.

Looking through the information on the SmoothieWare site I see a line int eh Config information about:

not sure why the message posted before I was finished…

I am not sure if this setting is applicable to the genuine (white) display. For grins I plan to add that line to my config file on the machine tonight.

If your adapter worked with the clone, it won’t work with the original. The clone and original have reversed pinouts. If going from the clone to the original, you need to turn both connectors on the adapter 180 degrees.

You missed the part where I said I was using the cables that came with the new display.

I have the new display plugged into the Uberclock adapter, nothing of the original installation is being used.

So to recap, new genuine white RRGLCD purchased directly from RepRapDiscount in HK. Using their cables. Using the Uberclock adapter. Smoothie has the 5v 1A regulator installed.

I didn’t miss it. The connectors on the adapters and lcd are reveresed, the cables do not matter at all.