I’m curious about triggering voltage vs. engraving. I don’t know much about CO2 laser tubes (all my experience was with different technologies) but looking at the specifications on those, I’d be surprised if they had much performance difference.

I would select the RECI. They have a lifespan of ~ 10’000 hours and 18 month waranty, and they are constructed more robust (especially the mirror ends). We have a Reci W4 in our FabLab Lasersaur and it works fine since 5 years. The tube ends are made of stainless steel, other manufactorers use glass or brass.
Also check the CloudRay offer: 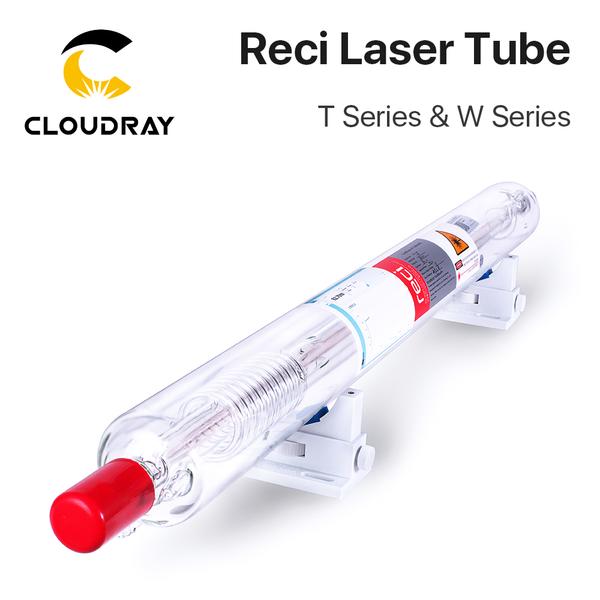 CL11-CL15$CL54-CL56.RECI CO2 Laser Tube W-Series 75W-180W CO2 Laser Tube Wooden Box Packing）If there is any quality issues of RECI Laser Tube purchased from us, please provide us a video first, based on the following link:...

@John_Bump I read on another forum last night folks saying that 80W is on the edge for engraving; that even there and for any higher power you needed a LPS that holds the tube at a high pre-ionization energy. However, when someone there asked how to do that there was only a theoretical answer of why it would matter, and no help on whether you could buy an LPS that had this feature…

And while I’ve seen used Reci LPSs for sale on Ebay, I don’t see them listed on Reci’s web site.

I care more about cutting than engraving, and I want to be able to cut ¼" plywood and MDF reliably, and to cermark/moly hardened steel as well as aluminum, so I’m going with 80W anyway, and I’m not going to stress about this.

I just figure that no matter what the slew rate when you engage the LPS, a lower triggering voltage will turn on sooner. Probably not enough to matter.

@cprezzi Working fine for 5 years in the FabLab is a good recommendation! And for where to buy them, I have both cloudray and lightobject in my BOM spreadsheet where I can change the quantity of either depending on where I want to buy it from.

I was thinking of Lightobject for the laser at least for shipping from the US to the US instead of importing. I recently had a few small, cheap 3D printer parts mailed to me from China get stuck in customs for over a month, and a few years ago customs couldn’t read the label for how to open a package for inspection and it was pure luck that the small parts they left rattling around inside stayed inside the half-open bag they put the disassembled box into.

Even if I bought everything laserish in my build from cloudray, I would easily fit in the personal use duty exemption limits, but if a customs officer is having a bad day I’m probably kind of out of luck. But I haven’t decided. And I’m almost certainly ordering at least some parts from Cloudray. They have a mirror/head set that is a good match for what I’m designing and comes with a II-VI lens and mirror set as appropriate for an 80W tube.

Shipping is more to the US from cloudray, so it’s actually only a $19 premium to ship from the US to the US, not worrying about customs, working with a company that is on a US timezone.

I read on another forum last night folks saying that 80W is on the edge for engraving; that even there and for any higher power you needed a LPS that holds the tube at a high pre-ionization energy. However, when someone there asked how to do that there was only a theoretical answer of why it would matter, and no help on whether you could buy an LPS that had this feature…

I’ve since realized that this could be managed in software (just use % power too low to fire the laser for off) or hardware (trim pot for the low state) and I think doesn’t have to be an LPS feature. This makes me consider a 100W instead of 80W tube.

I would go for the 100W, if your main target is cutting. For better engraving quality you can always use dithering instad of power modulation.

I did a lot of work on this early on and walked away unconvinced that the laser has anywhere near the response that folks think or need for the resolution they think they are engraving at… never found any evidence of what the real laser response time is. 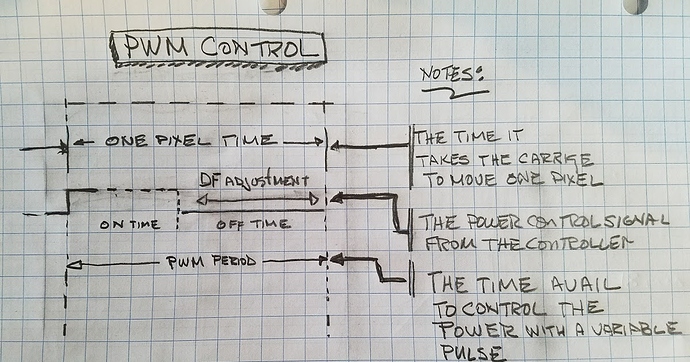 Pulse Width Modulation (PWM) Control Considerations for Engraving In RESEARCH PHASE I have been thinking about the power scaling in my K...

My conclusion for engraving was, slow way down and get to the smallest spot size possible. Alternately just use dithering. Since that time spot size reduction and better optics has shown good results.

There are a couple of references where PPI systems have been built with quite a bit of complexity.
There is plenty of evidence that holding the tube pre-ionized can improve response time, however I have not seen any clear response results. There is also a debate as to whether driving a tube this way shortens its life.

I don’t do much engraving so I never went into more depth. Not surprising to me, I have seen lots of tweaking to get to acceptable images, then there are other users and machines that just seem to work like magic :)!

@donkjr thanks! Were the two Google+ posts you linked to at the top of your blog among the posts for which I was able to successfully save the images? I looked through your posts from before the December 21 2016 date of that blog post but it wasn’t obvious to me.

It certainly makes sense that holding the tube at a high prio-ionized state could reduce tube life, so if I ever did that, having a switch for “engraving mode” would be possible. But honestly if I see alternating offsets from engraving boustrophedonically, I’d expect (mechanical) backlash to be the primary cause.

Since cutting is my primary purpose, and I understand that there is something I can do later if I start engraving and find it to be an issue, I can stop worrying about it and take @cprezzi’s advice and move up to 100W.

Someone must have had their coffee already this AM

EDITED
Mmmm I dont know where those images are. However there ARE many files out there for grey shade testing.
They may be these:

Definitely the word of the day. Actually a fun word to say once your figure out the pronunciation

Sorry, common term of art in computer science. But I do enjoy using it!

That’s going to replace supercalifragilisticexpialidocious as a word with the most syllables that I can pronounce!

I would select the RECI. They have a lifespan of ~ 10’000 hours and 18 month waranty, and they are constructed more robust (especially the mirror ends). We have a Reci W4 in our FabLab Lasersaur and it works fine since 5 years.

W4 is on order. I also ordered some less expensive optics than the II-VI set that I bought with the head, so that I can make my initial mistakes with less expensive parts, and then take better care with the good stuff. I also got every focal length that works with the tubes they sent, plus a couple that will require making or finding alternative nozzles. 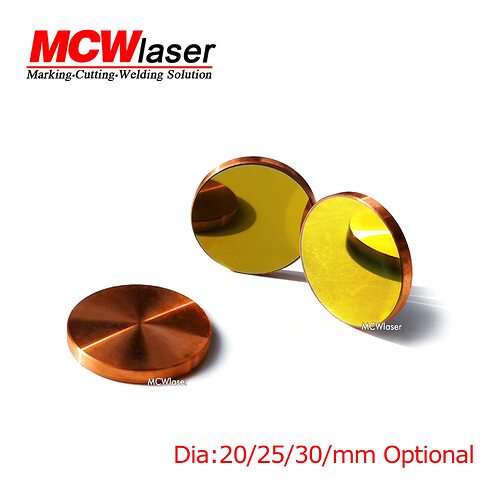 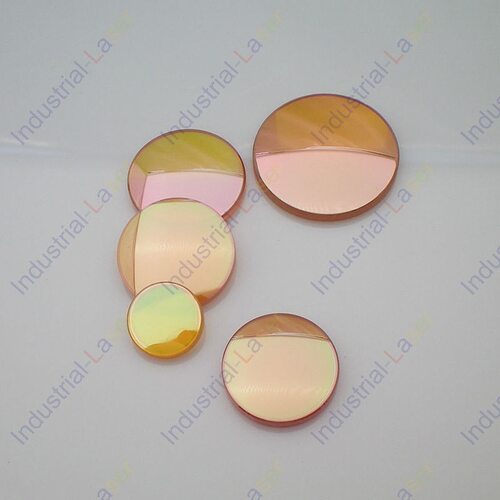 Last time I orderd the mirrors and lens from CloudRay, but we don’t have any experience yet, because the are not yet in service.

Today I found out, after placing my order, that LightObject will pay return shipping for defective tubes only during the first 30 days after arrival, which I didn’t see on their site. They won’t ship the tube without me signing an agreement to that. I guess I should delay signing the agreement until the rest of the pieces are coming together so that I will be able to test it more or less right away.

Not that I expect a defective tube, but it would be an expensive mistake in a way I didn’t plan for to be one of the very few to get a defective Reci tube…

Another option is to order a tube from Thunder Laser USA. They have excellent prices. They stock the tubes in Quitman, Texas, and carry them as replacements for the lasers they sell, but will sell a tube to anyone. Their tubes must put out a minimum of 10% more power than the stated power rating, IE, a 100W tube must actually produce 110W minimum or they reject it at the factory. If I remember correctly they also have a 2 year warranty. I have a 100W tube from them in one of my lasers and I could not be happier. They sell SPT tubes, a 100W is $750 plus shipping. (I paid $75 shipping to Canada on mine.)

Rather more for shipping than I hoped, but then the tube is 1400mm so what do I know? Really very similar net price to the SPT from Thunder Laser.

The SPT C100 is $495 from LightObject and presumably the same $165 in shipping, for $660 total. The SPT tube has a specified triggering voltage of 30KV which is higher than the MYJG-100W I ordered, which has a max voltage of 28KV, so the C100 wouldn’t work with that LPS, AFAICT. So I don’t think the SPT tubes are an option for me with the LPS I selected as a good match for the Reci based on advice here.

I would not have any concerns to sign that contract. Never heard of a Reci tube to arrive defective. LigthObjects just wants to give you an additional “dead on arrival” protection with their 30 day warranty.

I only visualy inspected our spare tube for cracks and then stored the box in the shelf. I don’t have any concerns that the tube will be bad when we need it.

I mentioned to lightobject that I’m not sure it’s legal to sell something and then only after the sale present a new agreement as a prerequisite to shipping. I’m not a lawyer of course.

Also, warranty terms I think in the US are required to be available pre-sale.

All that said, I think they are acting in good faith. The document covers max current and minimum cooling capacity needed, and frankly one of the big problems in the hobbyist laser community is lack of precisely that information. If they were to provide warranty replacements for everyone who fails to cool their tube or overdrives their tube it would cost way more!

I didn’t get back to the document (it’s been a hectic day) but they shipped anyway. They didn’t like my idea of waiting another week or so to ship, I think.

So, off to the shop to get back to work on making a home for this tube!

Tube arrived today. No visible damage. I have substantial work to do before I can test-fire it, but it was well packed in a large box suspended in a substantial amount of foam. My youngest and I very carefully set it in the frame for a test fit.

It just barely will not require a wart. There will be only a few centimeters between the anode and the first mirror.