One of my colleagues and a friend bought some bulk Anycubics Mega Zero v1.0 refurbished from AliExpress, the version without the heatbed. He sold them price pretty fast excepting one that he stripped down of steppers, mobo, psu, almost everything. He accidentally broke the screen and he found himself in the end with a pile of pieces that he wanted to get rid of.
Lucky for me i was able to buy that pile of pieces for a modic sum <45euro /50$: so practically at the end of September i had:
-skeleton/chasis of the printer (2020, 4020, 4040 profiles)
-nuts, blots and v-rolls (almost all of them)
-a generic broken screen
-1 Nema stepper. and 3 endstop switcher of which 1 i broke due to a short
-a warped and melted bed, because he toyed with it and he planted the heatbed in it for couple of times)
-some cables and 2 fans (1 radial, used as partcooler and 1 axial used as mobo cooler)
-the hotend with some teflon tube and a clogged nozzle)
Now almost 1 month later, Iam still working on it and I was wondering if you will be interested and give some oppinion on my job? 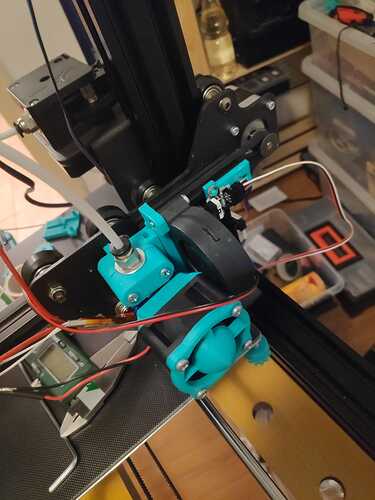 Waiting for your feedback, I feel I learned so many things in the last weeks it would be sad not to share the process.