I asked about this on the laser forum, but was advised to bring it here. Before I explain the problem, let me state that my first project was a Tesla coil I built for a science project in the 6th grade. From an ‘gifted’ AM commercial transmitter tube by an amateur radio Elmer. I moved on to fix TV’s (when they actually had tubes in them and hv) and dealt with many fly back transformers. Moving on to some micro wave tubes that had many Kv on them. So I’ve had experience. But, I’ve never built a hv probe… so

Assuming a max of 20kv, I can series ‘stack’ them for 400 meg and that should give me a full scale 50 micro amps, indicating 20kv.

Now for the physical, and the main question, can I stack these in a piece of 1/2" PVC pipe. Secure the hot end connection down in the pipe a 1/2 “, and insulated with some kind of high voltage silicon? At the cold end a simple bolt through the pipe wall to connect to meter. Overall distance from hot end to cold end would be around 10”.

I figure it to be about 1 watt of dissipation. These are three watt devices, so I’m hoping heat won’t be an issue. I thought 1/2 " PVC would be OK based on this dielectric chart showing that this material has a dielectric of a minimum of 10kv/mm. The wall thickness of schedule 80 PVC is about 3.7 mm.

I have seen hv probes that have a neon bulbs wired across the meter and assume it’s for an open meter situation. Could/should I replace this with a zener of some low voltage? I am hoping to be able to put my scope on the meter and get some idea of how the hv is performing…

Thanks for the assistance.

Since I think gas laser tubes are non-ohmic, could that create any problems for the LPS I wonder?

I see the resistors are each rated for 30kV continuous, so looks like you have plenty of headroom in a stack of four!

I’m replacing the PVC with some 3/4" OD x 1/2" ID acrylic tubing. It’s walls are over 6mm so the dielectric should be plenty. It’s 15kv/mm minimum. Main reason is to be able visually ensure that the components and silicon insulation are placed properly.

I’m pretty confident that it’s a safe design, I wish someone would chime in on it… Don’t need to ‘overlook’ something…

Does that cover your questions or are there more?

@donkjr is the only one I know who has played with the HV associated with CO2 laser tubes.

The real safety issue is getting across any hv… The resistors are in a stack, like this hv-stack.png - Google Drive

The voltage at the top is HV coming in at 20kv. Drop over each resistor is 5kv so between the first and second resistor from the top it’s 5kv less, or 15kv. The last junction is still 5kv. The bottom before the meter, at 50 ua, it’s dropped to a little over 1/3 volt. This is guesstimated from the manufacturer stated the internal resistance of the meter, about 6.8k, at 50 ua.

The best safety direction is that keep everything insulated until the voltages get to be something that doesn’t hurt, IMHO… Having an internal defibrillator, I don’t need anything that might give it a false positive and zap me anyway

I think I can do this… The whole stack will be in the tube, the top of the stack will be a 1/2" or more down the acrylic tube. It will be filled with silicone hv insulation. The dielectric of Acrylic is 15kv/mm minimum and this tube has 1/4" walls, so over 6mm or about 90kv + of electrical insulation. Should be safe for 20kv. I just need to look into how much of a silicon layer I need.

As far as I can tell, I can’t see an impact on the lps as I’m only drawing 50 ua maximum. I’ll put two hv connectors to break out the hv line and be able to just remove it if need be.

The issue with an open meter is that will no load you have the full potential on the ‘cold end’ of the device. With a neon, it would ionize at about 90 volts and limit it there.

The zener came to mind as I’d like to be able to monitor it with a micro controller via the adc and don’t want the input to the micro to exceed certain levels. Since the max is about 1/3 volt, I could easily limit it to around a volt and the micro would also be safe.

At this point everything, except the silicon is ordered. I’m working on the new meter panel face. Mine reads up to 50 ua, I’d like it to read 0 to 20kv…

Any suggestions for silicon?

If normal voltage at the meter is substantially less than one diode drop, why not a forward power rectifier diode? A 1N400x diode has a 0.7V drop, so if you are expecting about ⅓V at the meter just putting a 1N4001 across it should be safe; it’s not like you’ll pull more than 1A through those resistors.

And their breakdown voltage is 1200V or higher. You could have backup for the backup by also scavenging a neon bulb and putting it in parallel I guess if you want?

I’ll put two hv connectors to break out the hv line and be able to just remove it if need be.

Are those HV connectors safe when not connected, or would they potentially arc?

Yes, I could use that type of diode. Although there is resistance in the meter, in my experience it’s usually negligible, even though I’m trying to generate the voltages across it for test purposes. I would guess it’ll be the same as the meter… Considering it’s up against a 400 meg relation, it’s pretty small. I’ve built lots of meter circuits and never really calculated the actual meter resistance into the equation and all have been very close. Of course, never this high. I’m sure the ma meters resistance in the laser tube hv circuit is taken into consideration lol…

I try my best not to over engineer things, but end up doing it most of the time anyway. I think I’ll put the diode in the cold end of the acrylic tube…

With connectors, always ensure the female is on the supply end. That way you lessen the chances of it contacting anything. Don’t want the protruding male end to be exposed, whatever the voltage. Generally you don’t leave wires unconnected if there is any chance of it powering up.

When I build stuff I make my cut where needed and install a pair of connectors to reconnect the wiring. When I want to ‘insert’ my device I match the connectors so I can just put it in circuit. I can remove it and restore the original wiring or vice versa in a couple of seconds. Of course you need an extra set of connectors for each device.

Maybe this sketch will help illustrate, it’s quite simple and you probably already know it anyway. 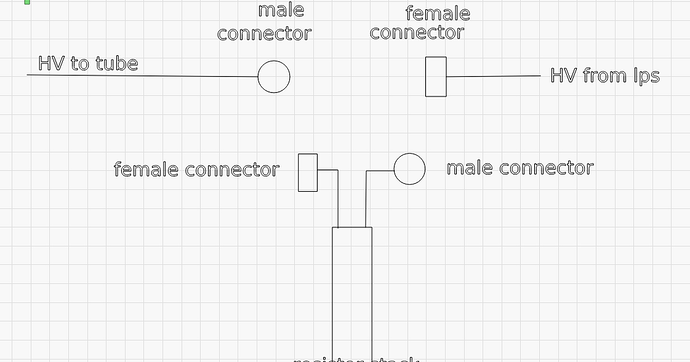 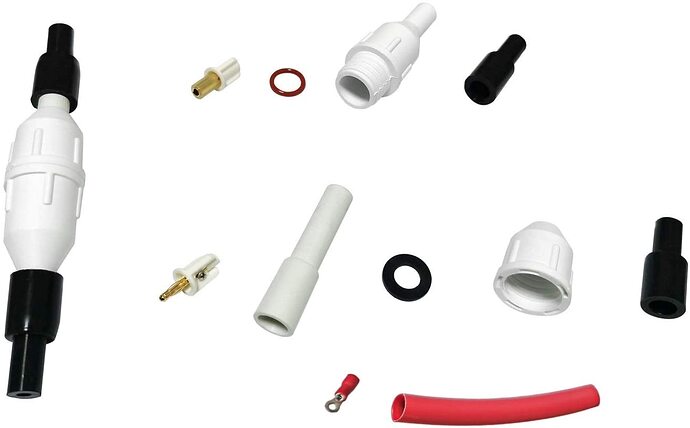 Ah, I see, patching in the middle, not creating a pigtail.

For the diode, meter, and maybe neon bulb, I am assuming they are all in parallel, below the stack of resistors in series.