Hi, I recently bought a k40 laser. After the initial setup, I started to make some work tests. Initially the machine was cutting well (apparently), but after some mirrors alignment the machine started cutting with errors in the first pass. When I choose one pass only or multiple passes in K40 Whisperer, the first line is always misaligned. I put here a photo of the problem. Anyone know where the problem may be or how to fix it? Thanks in advance 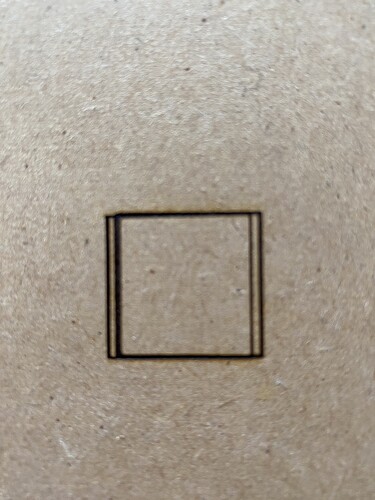 Thank you for reply. I will check mechanics but why this misalign is only in the first pass?

Solved, it was a mechanical issue. Thanks a lot

For the next person: could you please mention which particular mechanical problem you found?

For your question of why only the first pass, my guess would be backlash, but the answer might depend on which mechanical problem you found.

I just adjusted the position of the weels that move the laser mirror in the rail. It was quite simple. Thanks again