Someone did a cad model of these mounts and put it up on thingiverse. The cad files, stls and technical drawing are available in the link below for anyone interested. The technical drawing will save me from having to do the measurements I will need for my installation. 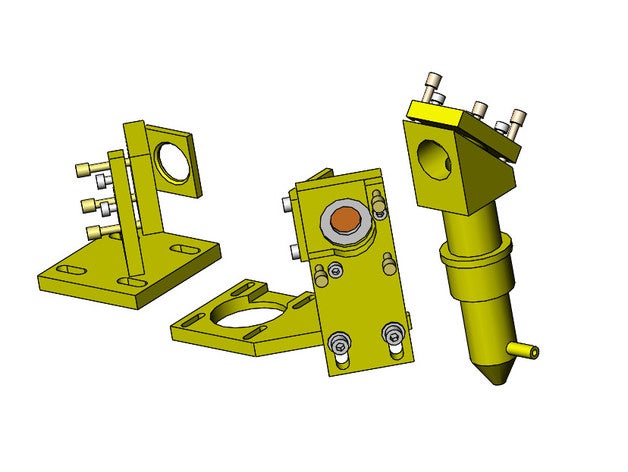 I am designing a new gantry for my K40 laser cutter and I am using new laser head and mirror mounts from Cloudray (purchased via Amazon). Since i couldn't find any 3D models of them on the web, I modeled them myself for use in my own design. I... 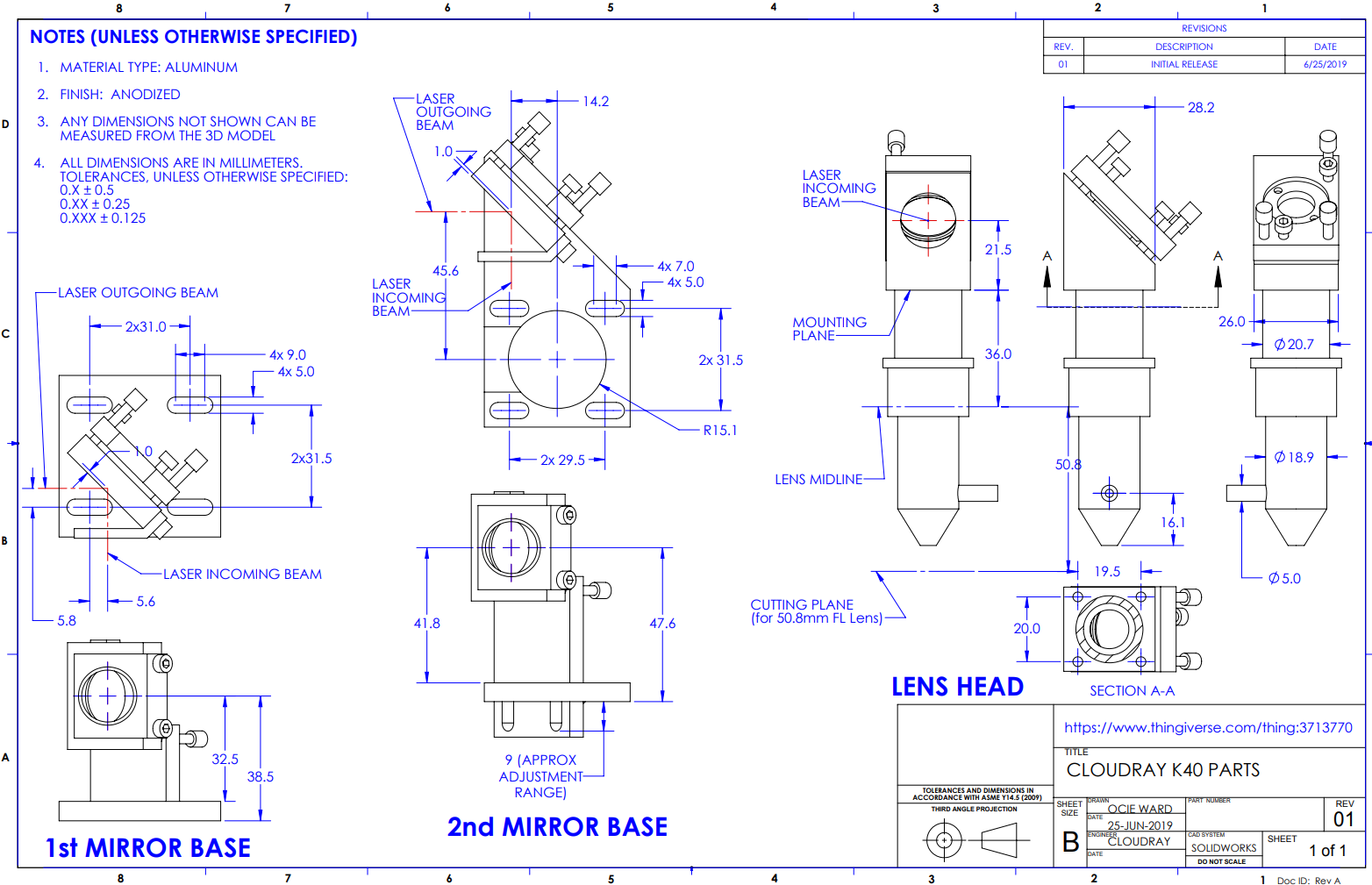 Sweet. Wish I had seem this years earlier

I always seem to forget to check Thingverse

I have an untested cad model for #1 mirror mount.

Someone else modeled them as well. He provided a bunch of other file formats other than .step for Solidworks. 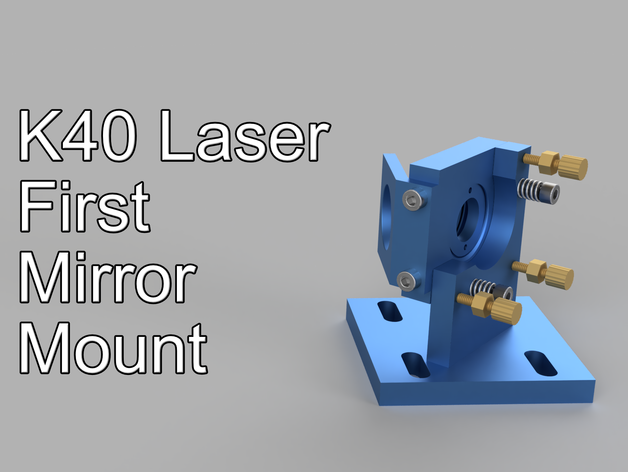 If You enjoyed this project and You want to say "Thank You" please consider supporting me by sending a tip on thingiverse or my PayPal here. 3D model of 1st mirror mount for K40 laser machine. This mirror mount should be placed next to CO2 laser... 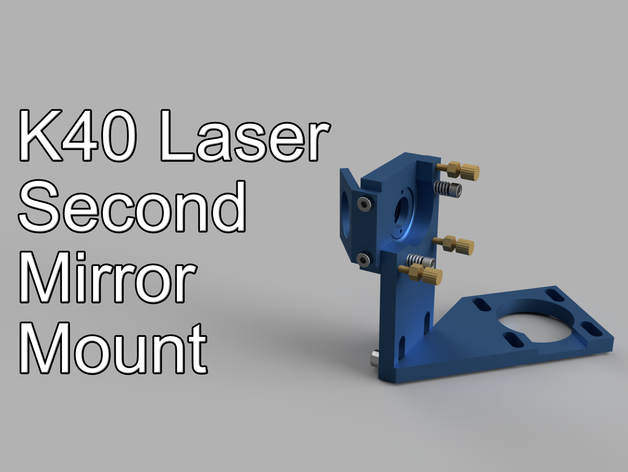 If You enjoyed this project and You want to say "Thank You" please consider supporting me by sending a tip on thingiverse or my PayPal here. 3D model of 2nd mirror mount for K40 laser machine. This mirror mount should be placed on gantry (originally... 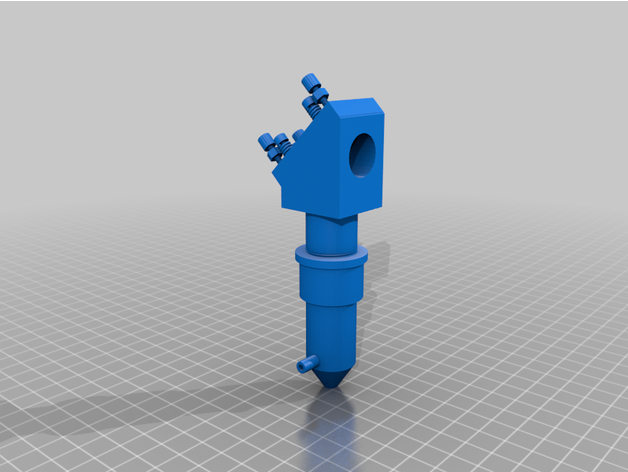 If You enjoyed this project and You want to say "Thank You" please consider supporting me by sending a tip on thingiverse or my PayPal here. 3D model of 3rd mirror, lens and nozzle mount for K40 laser machine. This part should be mounted on gantry on...

None of these have a rotary mount adjustment. I found that to be valuable for coarse adjustments. 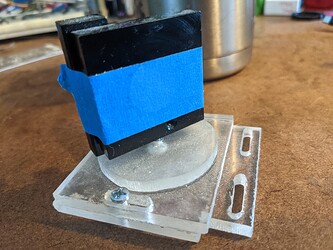 Yeah I like your design and may use it myself.

Decided cut down the top part of the down tube to reduce loss of available z-height. The top of the tube has a M20x1 mm thread. I didn’t have a metric die that big so I had to order one. The cheapest one I could find was this one from Amazon. 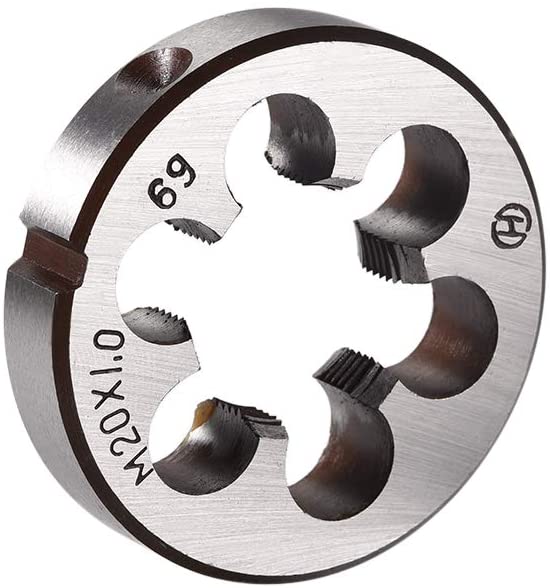 The outside dia. of the die is 45mm so my current die wrench wasn’t big enough. Rather then spending the money for bigger die wrench I decide to make one from laser cut plywood.

I am working on up grading the optic mounts on my K40 laser cutter and needed to cut down a part and then recut threads. I needed a M20x1mm die which I had to order. The outside dia. of the die is 45mm which is too big for my current die wrench. Rather then buy one, I decided I could make my own. Designed a basic die wrench shape, cut 2 from 1/4" plywood and glued them together. Rounded over the edges and then cut and glued a top for the die from 1/8" plywood. [image] [image] Installed a…

The ring was jammed tight after cutting the threads and to loosen it up I grabbed the top of the threads, I just cut, with some plies, since I don’t care about the top, and the ring with some other pliers. 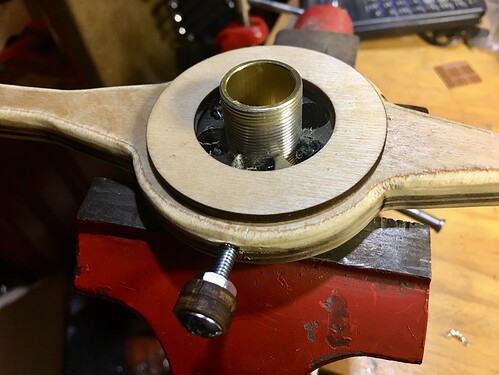 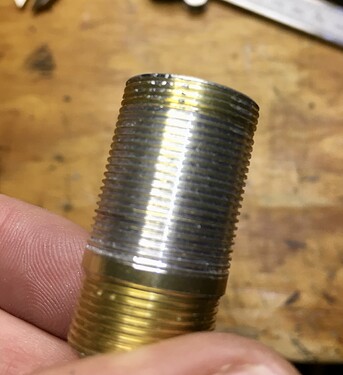 Marked a line at about 5mm of thread from the bottom. Inserted a 0.5" dia. wood dowel, to hold and steer, and carefully cut the tube on the bandsaw. Left with about 8mm to the start of the bottom threads. 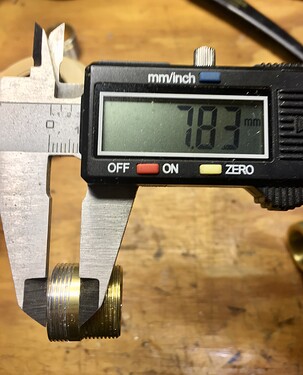 Worked out beautifully. Reduced the length of the down tube by about 18mm. 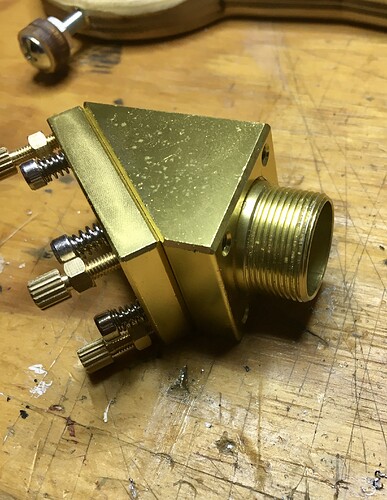 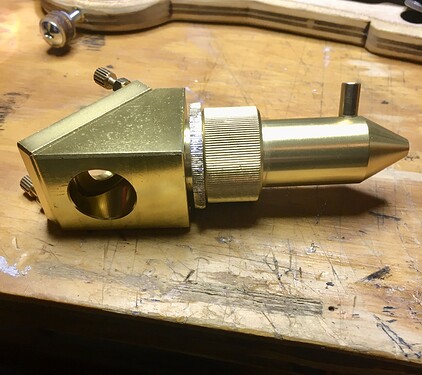 Is that tube adjustable at all?
Do you have to change anything if you change FL?

You can move the bottom section, which contains the lens, and up and down about 5mm. You would have to disconnect the air hose to do it though.

From the bottom of the lens to the tip of nozzle it’s about 42mm so you could do a longer FL lens but not a shorter one.

For a shorter one can you cut the tube down further or is the coupling to big?

The bottom tube and coupler are one solid piece as the lens sits at the bottom of that coupler section. So you would be looking at cutting a section out of tube and then somehow rejoining the sections.

Installed the second mirror mount to get this started because it appeared to be a direct drop in replacement.

The mounting plate goes over the motor, around the pulley, with a section milled out for the belt to pass over. This means you have to loosen the x-belt and remove it from the motor pulley. If you haven’t worked with the x-belt, the belt tensioning screws are on the right side. You access the screws from a hole in the wall between the laser compartment and the LPS compartment. Loosen both screws, shown circled, about the same amount until you can remove the belt from the motor pulley. 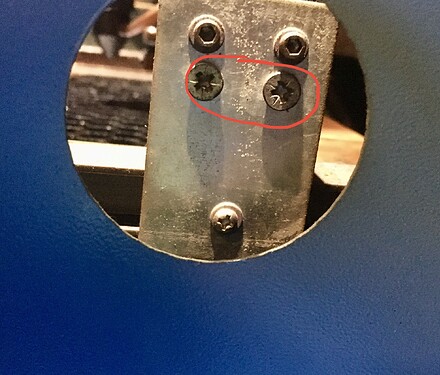 Mounted the new mirror mount using 4 M3 x 15mm stainless steel hex cap screws with washers and reinstalled the belt. Be sure not to over tighten the belt which can cause binding.

Lightly tightened the new mounting screws just enough so I could still move the mount side to side. Placed a piece of tape over the alignment wing and moved the mount back and forth, with test fires, until I got it centered on the beam. Tried to keep the back edge of the mounting plate parallel to the edge of the motor. Tightened all screws. 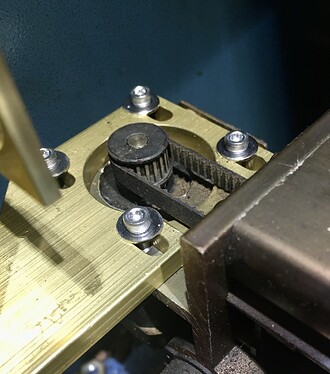 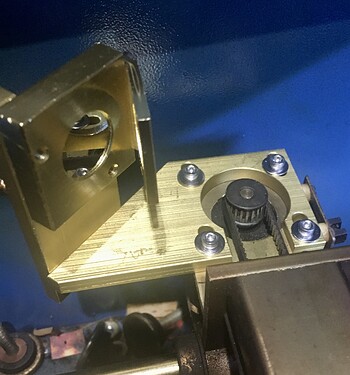 Got some PETG in for my 3d printer so as soon as I get that dialed in for printing I can get my adjustable tube brackets printed.

The locking nuts on mirror adjustment screws are 5mm. I don’t have a 5mm open end wrench, so I laser cut one from 1/8" ply. Here is the SVG file if anyone needs it.

I embedded a small 3mm magnet into the end of mine so I could stick it to the inside of the compartment to keep track of it. 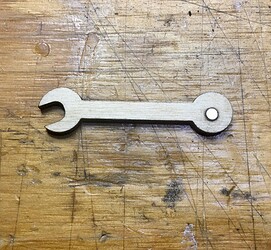 If you want a metal wrench, it looks like your can get a set of mini metric wrenches fairly cheaply. 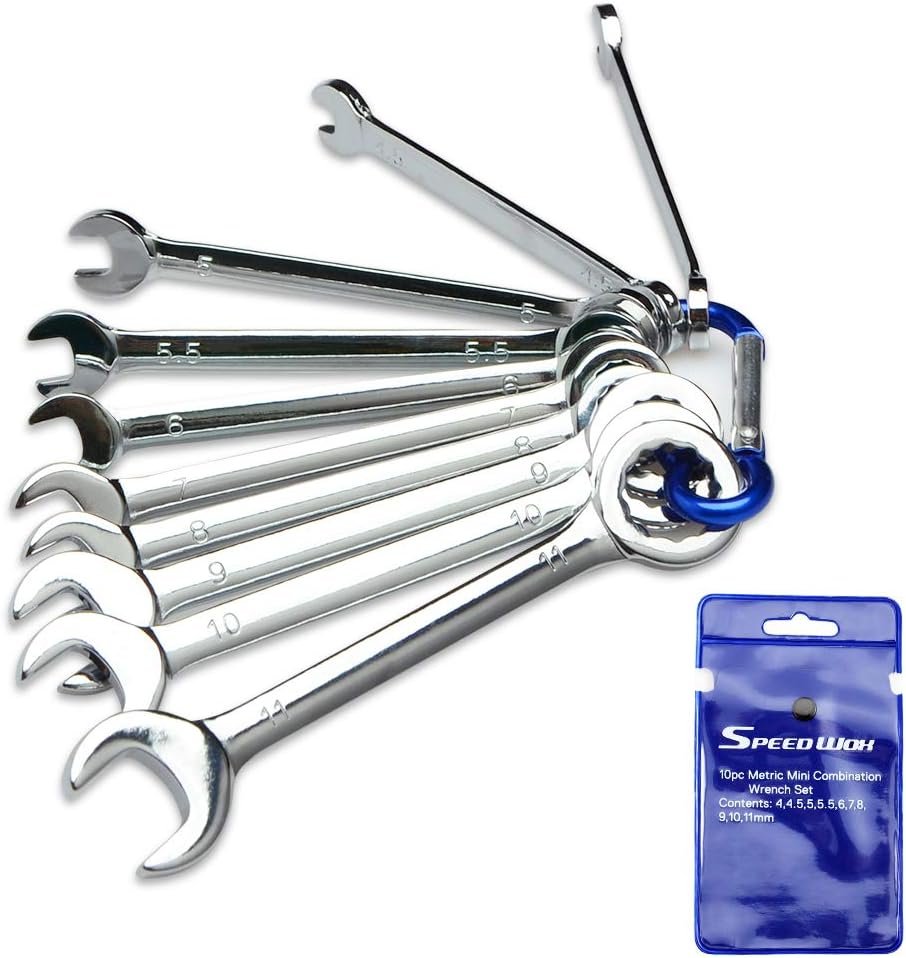 I have a nice Craftman set only because of adjusting the mirrors in my k40! They were the only ones who carried the small sizes at the time.

Yeah, the basic set of metric wrenches I have from harbor freight only goes down to 7mm. But fortunately I don’t need super amounts of torque and I’ve been finding laser cutting my own wrenches super handy.

It is almost a catch-22, you cannot adjust the mirrors unless you have the proper tools but you could cut your own tools if your laser mirrors are properly adjusted.

Tool making is a big part of the 3d printer groups. The first thing I printed was vernier caliper. I’ve also printed a couple of wrenches. Once you get hooked on these toys, your imagination goes wild…

I just looked at this photo again.
If you cut out the area of the bracket below the belt could you put this bracket on without removing the belt??
I dont think with 4 mounting screws this would weaken the mounting of the mirror???

I believe you could cut out that area without weakening the mount.

WELL CRAP. Disregard my top post. I went back and looked at the big pic you posted of the part set and realized I missed the small tab between the legs of the #2 bracket. I agree that you should be able to remove this tab as the original #2 is not near as row bust.