I was updating the image for the G+ Group,

I was updating the image for the G+ Group, and decided to have some fun. Many people have problems visualizing the size of these machines. So I thought… why not put them in a model along side printers many people know the size of. So without further adieu here is Herculien and Eustathios Spider V2 compared to the size of an Ultimaker2 and a Prusa I3 (steel variant).

I figure this might help people not be caught off guard when building something like the HercuLien. Most people who have built them tell me after starting: “Crap, I am going to need a bigger desk” 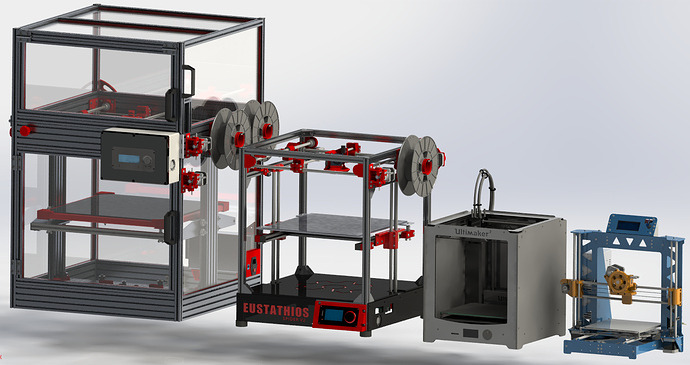 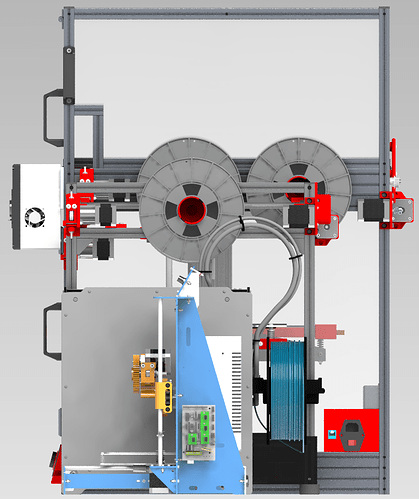 hey the crap bigger desk is what i said XD

Great addition! Really puts it all in perspective.

+Peter van der Walt Yeah, it is like I took a printer and smashed it with the OVERKILL HAMMER for about half an hour. I like it, but in all reality it is more printer than almost anyone needs. At the time I was printing prototype foundry pattern tools (to determine correlation of model geometry to real world shrink factors). It worked great for that because we could adjust the models to perfectly account for non-scaler shrink of ductile iron prior to committing to expensive production tooling.

@Jim_Stone You are indeed… just not the first

In my case it would be…i need a bigger garage!

very nice- I didn’t realize that the Eust is so much bigger than the Ult and Prusa. For people looking for a neat and cheap solution to housing two Eustathios sized printers I just bought this cart for $60 from Harbor Freight: http://www.harborfreight.com/24-in-x-36-in-two-shelf-steel-service-cart-62587.html. Plastic is probably better but the metal one is about 1/2 of the price of the plastic one http://www.harborfreight.com/24-inch-x-36-inch-industrial-polypropylene-service-cart-92862.html and has a ton of space on and in it. A 3D printer on wheels is easier to relocate if necessary too. Just updating: I measured and the bottom shelf is about 1" too short for a Eustathios

@Sebastien_Plante yeah, I moved them up in the model because the shadow made it harder to see the printers at the bottom. But it does look kind of odd.

@Daniel_Seiler just print the HercuLien carriage and replace the controller with a dual extrusion capable one. The carriages are interchangeable, just get the right cross rod bushings

I’m thinking about building a stand out of extrusion stock with some fold down roller blade wheel castors, kinda like those workbench kits where the castors click down for moving this beast around.

I think that @Mark_Rehorst put casters on the back of his UMMD to make it easier to transport.

Yes, I mounted skate wheels (from a pair of skates I bought at a Goodwill store) on my 3D printer to make it easier to move around. It has two wheels and two leveling feet so I can set it up anywhere.

I eventually want to change to larger wheels so I can move it up and down stairs easier- skate wheels aren’t ideal for that. 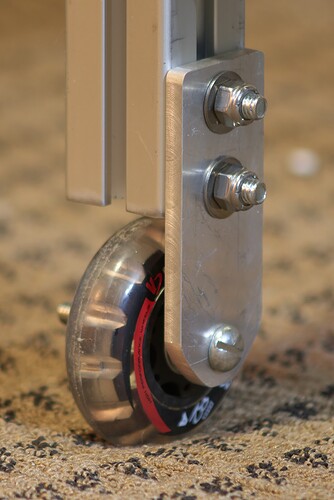 If you think about it, 4 legs/feet makes about as much sense as using 4 screws to level a printer’s bed. It would be better with 3, but I think you’d have to spread them a little farther to ensure the thing doesn’t fall over if you bump into it, and that means taking up more floor space.