I set up a VM for running folding@home to help with research. I had trouble finding information on how much CPU and RAM to assign, so I gave it 4 CPUs and 8GB RAM. It turns out it’s really only using one CPU — apparently the COVID problem doesn’t parallelize easily — and a bit less than 3GB RAM. So a Linux VM with 1CPU and 3GB RAM is probably effective, and if you have a system that’s on anyway and has unused CPU it’s probably worth spinning up a Linux VM and joining the party.

The blocks can take a while to crunch. I’m using CPU only. If you have a desktop and can let it use GPU I think it goes a lot faster and can probably handle blocks overnight. For me, on the processor I have already running 24/7, it’s going to take more than a day for a single block of work. But it’s already running, so might as well let it do something useful.

I guess other research doesn’t come to a stop during the pandemic; the second block my system got was for cancer research. It’s effectively using all 4 CPUs and less memory than the COVID-related block.

“…These calculations are enormous and every little bit helps! Each simulation you run is like buying a lottery ticket. The more tickets we buy, the better our chances of hitting the jackpot. Usually, your computer will never be idle, but we’ve had such an enthusiastic response to our COVID-19 work that you will see some intermittent downtime as we sprint to setup more simulations. Please be patient with us! There is a lot of valuable science to be done, and we’re getting it running as quickly as we can.”

Apparently they found stuff for systems to do, and Folding@Home has really taken off. 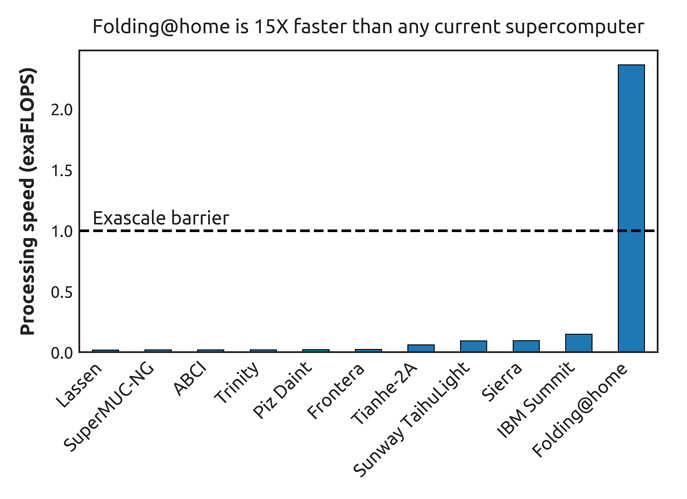 With our collective power, we are now at ~2.4 exaFLOPS (faster than the top 500 supercomputers combined)! We complement supercomputers like IBM Summit, which runs short calculations using 1000s of GPUs at once, by spreading longer calculations around the world in smaller chunks!

After over two weeks of folding, my computer started halting with a CPU temperature error while folding. It’s working now that I stopped folding, so I think I just got an early warning of imminent hardware death. Now I get to think about home computing refresh too.