Hi folks - I’m a newbie so please treat me gently

I’ve been 3D printing for a couple of years and am now wanting some more kit - specifically a laser engraver. I’ve decided to put one together using kit that I already have - a basic x-y chassis, some Neema 17s etc. I’ve bought a diode laser head for the engraving - the most powerful in my budget which claims 40W (fantasy) and optical rating of 12-14W (probably somewhere near to true).
I now need to select a controller board to bring it all together. No doubt I could use the old CR-10 board I have lying around, but it is definitely time to seek wiser council before splashing more cash or spending time building a nice case or enclosure for a controller that would be pants anyway.

So, gentlemen (and at least a few ladies, I hope), I seek your council.
What would be the way to go. The chassis is about 20 inches square with about 10 inches possible z travel. The head is 12V with standard 0-5V pwm/ttl (image below).

The use will be overwhelmingly engraving onto wood/plastic etc with maybe some cutting if the laser appears capable and I can be bothered knocking up air flow and extraction. 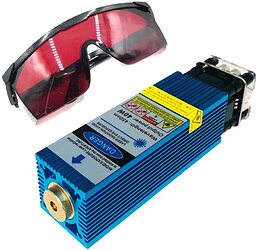 Thanks in anticipation of your wisdom.

Welcome to the forum.

The choice of a controller is a many factored one dependent on your key wants. Mine are:

** these are critical IMO for a scratch builder.

I have had a K40 for some time and have been watching the evolution of the Laser Diode engravers. I recently bought a cheap VG-L7X unit with the intention of making a unit that is much more portable and simpler than a K40. (No cooling and simple optics). That said I have low expectations for cutting with a laser diode. Turns out that I use my CNC router for cutting most times. Most of my work is in wood and plastic.

I just started my learning phase and you can monitor progress here using the search for VG-L7X tag and/or my blog. Or we just collaborate as if suits you.

I have decided to use the AwesomeTech controller MiniGrbl as it meets my needs, I know @Paul_de_Groot at AwesomeTech. Note: Paul is a member of this forum

A key need for me is the use of Lightburn to design and drive the unit. It will handle all the formats I need including Gcode that I may create from another CAD/CAM tool like Fusion 360. 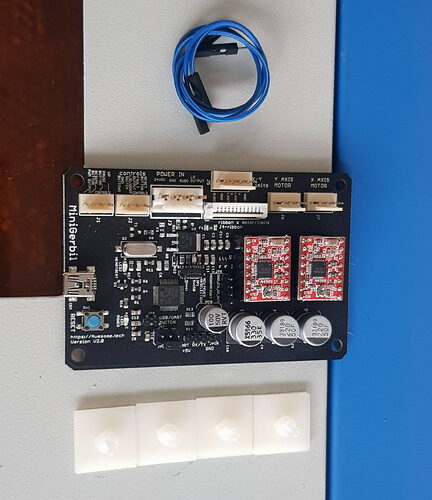 most any DIY 3D printer controller which is supported by GRBL will work for you and if you want software based Z control you’ll need one with at least 3 stepper motor drivers/sockets supported.

Some of the most popular diode laser machines, Ortur, NeJe, etc use GRBL firmware on their controllers but are also only 2 axis controllers an rely on the user manually making Z axis adjustments.

The 8bit boards are quite inexpensive but have limited program storage space and 32bit boards are the way forward IMO. They can also be pretty inexpensive or expensive. I do like boards with driver sockets so I can pick my drivers but there’s a bit of headache with that in figuring out what jumper configurations are needed for the drivers selected. TMC2209 are my current favorite because they are super quiet and run the motors cool.

There’s other laser firmware which works well like Smoothieware and is supported well and for certain controller boards. There’s also Klipper firmware which you might run across but they might still be more tuned to 3D printing than lasers still.

I switched a few of my machines to LinuxCNC on rPi and Remora on the Smoothieware compatible 32bit controllers but that’s a whole lot of learning required for setup and ease of use.

One last thing to look at would be http://Grid.Space and the Kiri:Moto software. They have middleware software to work with GRBL based controllers which acts sorta like OctoPrint but for lasers, 3D printers and I think CNC. This all works with the browser based(locally run software) slicer software for all 3 machine types. It’s quite amazing really.

Your choice of software in your workflow can dictate what hardware you’d need to run on your laptop, desktop or SBC computer. There’s hardly only one choice for everything from controllers, firmware and CAM toolchain. I probably spent close to 6 months figuring out all the options before I settled on making my Mini Kossel based 3DPs almost 7 years ago. Lots of interesting things to learn and consider if that’s your interest. Have fun and learn something.

Thanks for that Don,
you are a little further down the path than I am and - just guessing here - do you have an engineering or project management background? The way you went straight into Crit Path Analysis speaks to me of someone with such a background. My own background is a bit of IT networking and systems management, and a whole lot of teaching out of date computing paradigms to 14-18yr old wanna-be hackers who wouldn’t know a bit from a bicycle

I’ll call in at the links above and study a bit more over this weekend, and I hope we can exchange ideas, experiences and results to our mutual benefit (though I suspect it will be mostly one-way until I get up to speed).

Thanks Doug,
that confirms much of what I had suspected/inferred and gives me some concrete options to looks at. When Covid first broke I suspected that I was in for long periods of solitude (I live alone) and decided to splash some pension cash on equipping a work/play room with kit and tools to occupy me during the coming months. I have to say it was a great decision. Since then I’ve deliberately started projects that I know little about and let myself follow where it took me. My first idea was to build a sand-table (like below), which led me back, via arduino, into low level coding (for the first time in decades). I then detoured to get my soldering up to scratch (I was building some horrible circuits and trashing too many components), spending a couple of weeks in bootcamp with an iron and many old breadboards until I got it right.
Next I got a cheap CR-10 to print the custom brackets and mounts I needed, and this led me down a whole new learning path before I could get decent results from the kit.

The last 18 months have been pretty much along the same lines - side-tracking to learn or revise skills, before returning to the main idea. I have to say it has been thoroughly enjoyable, and I’ve extended. improved, and sometimes relearned quite a few basic skills that I complacently thought I already possessed

@Bikerman
Yes, I guess my background still hangs out!
I am a retired 40+ year EE/Software engineer with product/project, market & business management experience. Now I am glad to leave most of that to the youngers but I cannot bear to work on anything that doesn’t have a plan … lol… uggh! Drives my wife crazy when she wants something done fast!

Not that it helps me get any more done… it just keeps reminding me how ADD I am.

Oh my! The sand table. What a great idea … focus DON!

StartSoapBox
{
I worry about the coming generations. They have no clue how much fun it is to build stuff. School, sports practice, and TV with lots of mobile screens in between seem to be the routine. Not taught problem-solving, tool use, and fabrication. Never experienced the satisfaction of building something.

Not a single one of my descendants seems interested in Making and only one of my children. I come from a family of 7 boys and we all [and my 92year old dad] are makers/engineers of some sort.
Then again I was taught by my dad and we had a large shop and tools.

But I guess that is what all the OLD guys say… about the next generations.
}

<But I guess that is what all the OLD guys say… about the next generations.>
Hmm…that would be logical, but I actually share your concern and I don’t think it is just two aging men reminiscing heroically.

<I have removed this posting - it was seriously off topic and not appropriate for the forum - any offence or irritation was unintentional and I’ll try to keep on topic in future :-)>

Hi @Bikerman! Welcome to Maker Forums! Sounds like you will fit right in here.

I’ve been following Mark Rehorst’s sand table adventures, including moving to driving with servos, and I’ve found it fascinating. So beautiful…

Unlike @dougl, I have a general preference for boards with built-in modern (e.g. TMC2209) drivers, because they dissipate heat better, but it really likely doesn’t matter for your application. The 2209’s have MOSFETs with very low RDSon so they don’t generate anything like the same heat that older drivers did, so I was eventually talked into getting a board with TMC2209 “step sticks”. I do try to maintain a list of controller boards with built-in drivers, though.

Hi Michael. Thanks for that - your list will be very useful in deciding on a final choice.
Much appreciated.
Chris