What type of remote release clamping device could be used to trigger dropping a dead weight of say 500 pounds from a height of 6 feet to break rock? I have thought of modifying a Vice-Grip pliers. The manufacturer of the Vice-Grip claims these hand tools have been tested to pull 2,500 pounds. I could remotely rotate a flat bar to release the clamp. I might consider using two Vice Grip pliers to be safer. I would not be near when I dropped the weighed chisel. Wikiepedia says wrecking ball cranes used a rope drum clutch - a device I wouldn’t know how to build.

It is possible to build a specialized Vice Grip like clamp, but I think I could modify the normal type of this common tool.

I think I would use a modified Vice-Grip pliers and a remote release. I don’t know how much weight I’d need to drop to break limestone, but I figure I’d
start with about 100 pounds. This type of tool dates from Medieval trip
hammers used for blacksmithing.

if you expect to drop it more than once there might be a reason to consider one of the methods which keeps the weight captive.

And what technique will keep the weight captive ? I can see that the weight bouncing could damage the tool

Not as helpful as I thought it might be, but I did finally come up with the term this made me think of. A “sear” is the mechanism in a firearm which holds the hammer back until you pull the trigger. 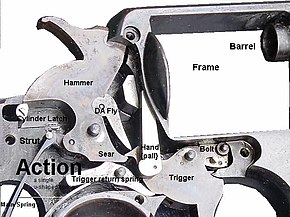 In a firearm, the sear is the part of the trigger mechanism that holds the hammer, striker, or bolt back until the correct amount of pressure has been applied to the trigger, at which point the hammer, striker, or bolt is released to discharge the weapon. The sear may be a separate part or can be a surface incorporated into the trigger. Sear mechanisms are also frequently employed in archery release aids. As one firearms manufacturer notes: Sear: A sharp bar, resting in a notch (or in British...

And what technique will keep the weight captive ? I can see that the weight bouncing could damage the tool

a rope or cable for one, another would be attaching to a long pole either with the pole in a loose tube for direct vertical movement or the poll out horizontal and pivoting at the far end either at ground level or some distance above the ground.

I am pretty sure dropping a 100 pound weight from 6 feet would be easier than moving the boom and hoist over uneven ground. I need to focus on safe overhead rigging of the boom. It must not tip and yet it needs to be relatively easy to move to a different spot on uneven ground.

My goal is to create a cistern for rainwater collection. In the 1850s settlers in this area dug cisterns from the rock using hand tools. If they could do that then, it must be possible to do it using some homemade tools.

It might be best to make a simple gantry with 4 support posts set in concrete. I don’t need to use dollys to position the overhead boom. I can slide the hanger and use c clamps to keep the boom from moving. As the limestone is broken the hole will get deeper - the drop will begin at 6 feet, but could increase to 12 feet as the rock is removed.

Feather and wedge is probably the way that local cisterns were dug 150 years ago. Others use a chemical expanding cement to break rock. Another method is to build a fire over the timestone. I attempted to use a jack hammer - that takes forever.

A lifeboat hook is a quick release device. I uses a cam to spread the jaws. The weight being suspended causes the jaws to close when the cam lobe is rotated to allow that to occur - naturally by the weight.

Many have been killed or injured by lifeboats being lowered, maybe as many as half the occupants have been killed or seriously injured. The development of this type of release hook helps lower lifeboats, but it is still highly risky. Many ship hands have have lost fingers when attempting to release the old style hooks, this newer device is operated remotely and could be ideal for my requirement.

What did those Aussies use when they tested dropping that giant rubber band ball from a helicopter?

What about some sort of electromagnetic coupler? Think scrap-yard crane. Or magnetic door lock like…