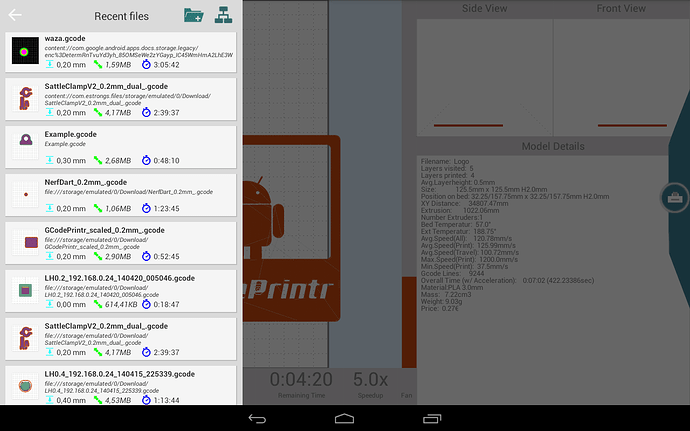 Love the new recent files dialog, its very pretty. Unfortunately in general the new beta seems to be much less stable. I have had several crashes where the printer just stops mid print and gcodeprintr just exits. It seems worse when IPWebCam is running at the same time, I can get at most about 10 minutes printing before it crashes out, but I have had the same thing happen with no other background apps running at all.

Is there some way of running the beta versions side by side with the stable release? I really want to participate in the beta test and help you develop this software, but there are some days when I cant afford to have issues like this. I have a job which I have to complete and its looking like im going to have to uninstall the beta and revert back to the stable release or Im just not going to be able to get it done.

Thanks for the feedback. I was not aware that the beta is less stable. Is there any error message or a dialog to send a crash report when it exits ?
Unfortunately Google does not allow to install the beta side by side with the stable release. But you could install the GCodeSimulator Beta for trying out most of the new features and keep the stable release of GCodePrintr for printing.

If it does turn out to be something else in my system at fault then I apologise!!! However at present the only thing I can think of that changed was the update.

No error message or dialog comes up. Gcodeprintr just exits and the tablet goes to my home screen. I currently have my print running, its 4 hours in and hasn’t crashed (fingers crossed). I’ll keep playing with it and try and work out what I have done differently this time.

Quick update. I am still getting the occasional hard crash ie. GcodePrintr exits with no warning or error message. I haven’t yet been able to narrow down any particular sequence of events that cause it.

@Colin_Rose strange. Do you use the touchscreen right before the crash happens ? I had an issue with graphic acceleration on my Intenso tablet which caused a hard crash when I used the touch screen.