Sooooo.... I have the Cohesion 3D mini board,

Sooooo… I have the Cohesion 3D mini board, By chance does anyone have the link to convert to the cohesion from this fine piece of electrical engineering. 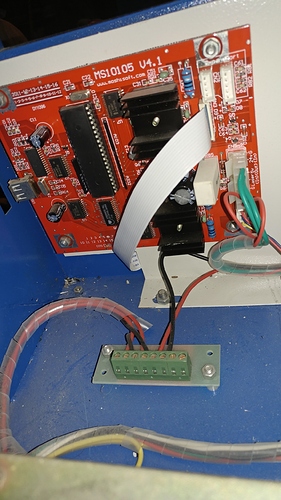 Info should be on the Cohesion community or here https://cohesion3d.freshdesk.com/support/home

I’ve found info on the nano boards, I haven’t been able to find a thread where someone has done the moshi conversion.

This is a less common board, we’ll have to finagle some items around. Start with the ribbon cable. See if you can identify the motors, endstops, and individual items in the power connector (that’s the big one, probably 6 pins)

Power is at least identified for the most part. 5v on the left. 24v on the right.

It would appear that the ribbon controls the X axis (L/R) while the Y axis has a stepper motor plugged straight to the board (CN4). 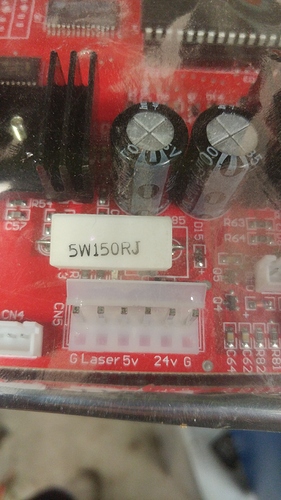 You’ll find similarities to this, check the comments thread:

For the power cable, there are 2 options. Rekey the pins in here to keep the 6 pin housing.
Or cut the board end off. 24v, gnd, and L all have screw terminals for you to put the wires in. L goes to 2.5 - bed which is the 4th from the left bottom screw terminal.
The 24v and gnd are top left.

Get acquainted with the pinout diagram for Mini on the docs site.

Yes ribbon is fit both endstops and x axis and y has the plug to go straight to the board. You’ll need to swap +24v and G around if i remember correctly as they are reversed on the C3D board. Also you will need to cut that plug down by one pin to allow it to fit the power pins on the C3D.

Can u show a pic. of the PSU connected to the Moshi board? would help with figuring out what goes where, there is a bunch of them for moshi´s.

These are the 2 red wires going to Moshi. The 2 pulled to the left and up. According to Moshi I need to swap them in the power connector as the C3D is Laser, Open, Ground, 24v… The Moshi is G,L,O,O,24V,G.

I’ve reconfigured the connection accordingly. The board powers up but does not home the laser. 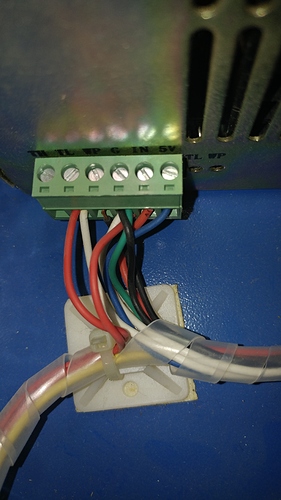 This is the power from the 24v. 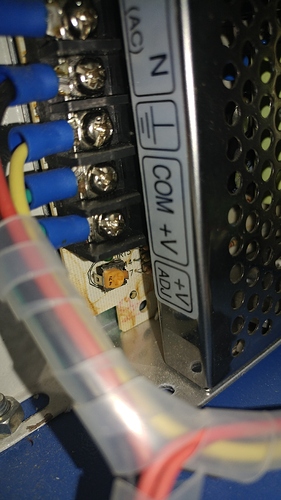 The board does not home the laser on boot.

Sweet. So new question. Is the laser supposed to fire when the test button is pressed? It lights up a pretty lavender color but nothing comes out of the end.

Yeah… did it work “properly” before you swapped the board? What is your pot set to, try a higher value. In general the answer for that is your mirrors are misaligned.

No. I did what it is doing now… Only it also homed when power was turned on.

The laser was at a friends completely covered in dust. And dirt. He had no clue where the usb dongle was.

Ok. So unrelated to the board. Time to get LaserWeb up and running and jog the machine.

Yeah if the board itself doesn’t home on power then I think so. I’m just trying to figure out the laser thing now.

But yes… I believe this unrelated to the C3D as this is what it did prior to the swap as well.

@Blake_Benefield make sure your computer supports webgl, mine didn’t. I had to switch computers for laserweb