So I used a 1/16 diamond pattern bit and this is Red Oak and I’m thinking I probably should use a different bit because man I sure did have this thing smoking! I got the diamond pattern bits because I want to cut carbon fiber. Still working on speeds and feeds because I thought I had the depth for the cut correct but I had to manually jog the Z axis down a bit and run it a couple times to get all the way through. 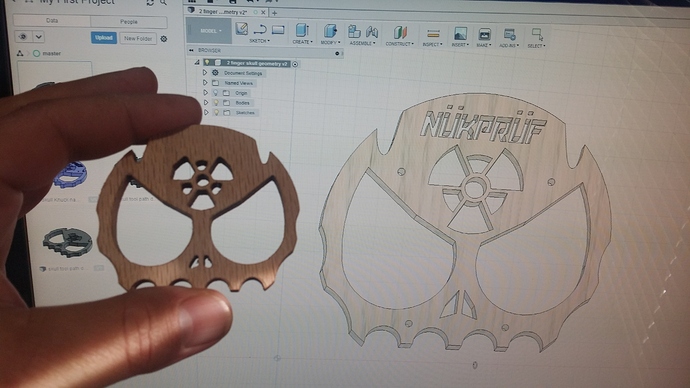 Really looks amazing man, you are killing it.
Time to get into z probing and tool length offsets.

@Brandon_Satterfield ​ Thanks Brandon. All I have been doing is watching tutorial videos and playing around with the R7. It’s quite addicting!

@Nukpruf I have an idea in mind for a tool that would be exactly what you need. Gotta find the time! Maybe it’s been done but it would be a probe that replaces the end mill. This could be used to auto-level non metallic materials. Maybe someone has thought of it before, need to research.

That would certainly work and is a solution you could do now. One clamp to the tape, one clamp on the end mill.
Run both wires to probe on the board.
In Chilipeppr, auto level.
In your Gcode generation just make the stock depth ___mm below 0.
You should be able to hit the Z exactly.
Don’t forget the holding tabs, in less you are using something like carpenters tape.

I have a bunch of these cutters.

They are nice for detail work in wood. As far as Z goes. I just cut .020" into the spoiler board. Tool Length offsets should be interesting for compensating for bit changes. I will have to learn about it.

As far as probing goes, aluminum paint might work.