Progress of my smaller Eustathios.

Just realize my spectra line routing is wrong, so need to fix that. Still need to change the 6900 bearing holder & geared Z motor mount, and decide on the extruder.

step file is in here:

Would like some feedback on anything I should watch out. 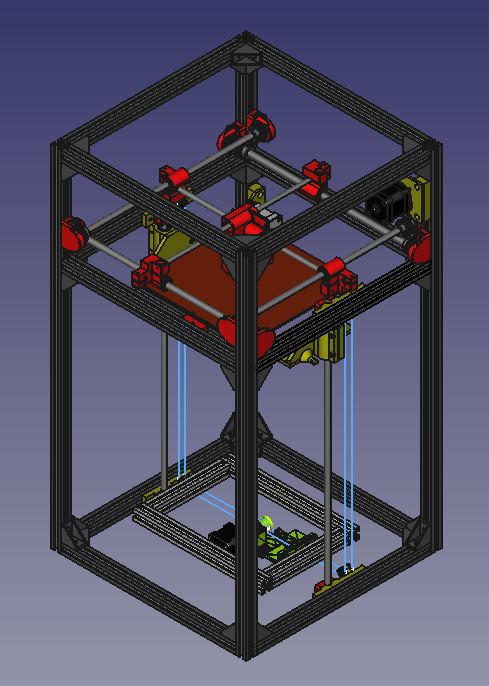 Thanks. Last time I checked, it mixed metric/imperial parts, and it’s difficult to get imperial parts here. I want 200x200x350 build volume, it seems easier to shrink the Eustathios than expand the Tantillus.

Tantillus? It was awful from a build perspective - I’m with you @hon_po - the mix of metric and imperial meant it was up for a complete redesign. And the parts he did use were a bit… esoteric. Rather than using standard (and thus, easy to obtain) parts, it looked like he designed it with what he had in his shed.

Nice work @hon_po - I’m keen to see how your z-axis mechanism works. I’ve realised getting 2GT belts in the right close-loop length is going to add quite a bit to the base cost - $2-3 each - plus finding a 5mm shaft to mount the pulleys on means that I am looking for a different z-axis for the PlySli3DR.

And… speaking of extruders, do you have a preferred design? I was hoping to have it mounted inside the chassis, but I think that idea is fast disappearing. To do so would mean I need to find something very petite.

you will probably need to drill before tapping. use the recommended drill bit for the tap you use. and edit i meant m6 button head screw

@Mike_Thornbury there’s no perfect design, and you cannot please everyone. So I’m OK with designing with things on hand. By releasing whatever design and let it evolve has been a great thing of the community.

cost wise, sli3dr is better, but ingentis is more proven at the moment. Don’t find my preferred extruder yet.

@D_Rob I found cheap 2028 bracket locally, it’s easier to use it than drilling & taping.

On the street now, will check the video later.

I found taping drill which do drilling & tapping in one go. But I’m more worry about alignment of the frame.

I work a lot with extrusion - just buy the self-tapping screws - much easier and just as solid as drilling and tapping. I use these a lot, and the M3 ones, with a washer: http://www.aliexpress.com/item/100PCS-Stainless-Steel-304-M5-20-Hexagon-Socket-Head-Self-Tapping-Screw-Sound-screw-model-screw/1646384044.html

@Mike_Thornbury ​ you use these in the t-slots like t nuts? the button head screw :https://encrypted-tbn0.gstatic.com/images?q=tbn:ANd9GcT5vkVFeqHegupiEQ6TUvpYR9oL8C64gwvpxBTMAw7Gr0ESZDa2mg has the right profile to fit in the slot as if it were a t-nut

Instead of using t-nuts, you drill a hole through the side in the channel of the extrusion and straight into the end of the extrusion. It works well and grips like a schoolboy

You do need to make accurate cuts, though, as the only thing keeping your assembly square is the face of the cut. I dialled in my drop saw a few weeks ago and after about 18 different cuts, my right angles measured between 89.99 and 90.01 degrees, using nothing but self-tapping bolts.

Nice work! Do you have any close up photos of your Z-axis drive mechanism and Spectra routeing or maybe some schematic drawings?

Nice job. One thing I will warn about is when you build remember all the tnuts. Eustathios is a nightmare to get one in that was forgotten part way through the build.

I also agree with @D_Rob ​. Assembly with the tapped ends method is stronger. I did both on mine because I overbuild everything. But I feel the threaded ends method made things more ridged that the brackets did.

You may find you want to relocate the XY axes motors out of the way…they seem to eat into the print envelope in unexpected ways.

@Mike_Miller I agree, plus keeping them out of the heated zone if you enclose the sides has its benefits.