A few years ago (5!) I was contracted to make some Volunteer appreciation buttons for the hospital where my wife works.

100 National Healthcare Volunteer Appreciation week buttons done. Made from 3mm alder and are 50mm (2") in diameter with magnetic backs. They went with a totally different design (hospital logo) then I posted about a couple of weeks ago. They are for volunteers in my wife’s dept at the local hospital so I made her help me paint them

With white paint it was going to take 2 coats so I had to come up with a way to make the painting easier so it wouldn’t drive me crazy.

Decided to make some laser cut, what I call, sub masks. Applied wide blue painters tape to printer paper and cut out tight fitting masks. Quick and easy so I used them as single use. 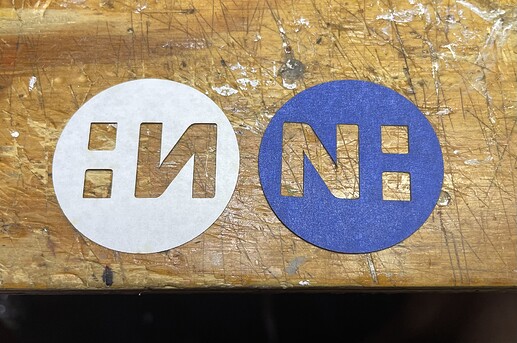 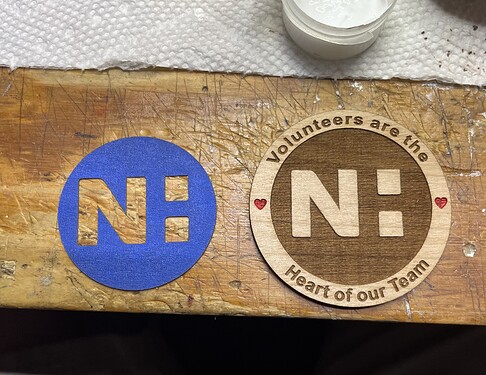 Made sure the engraving was deep enough to accommodate the mask . 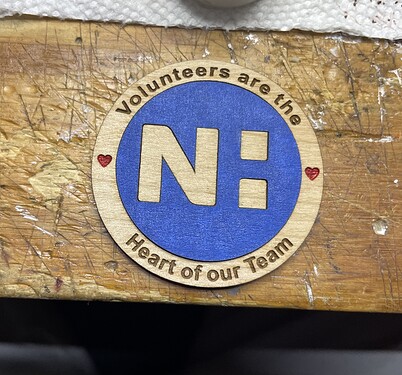 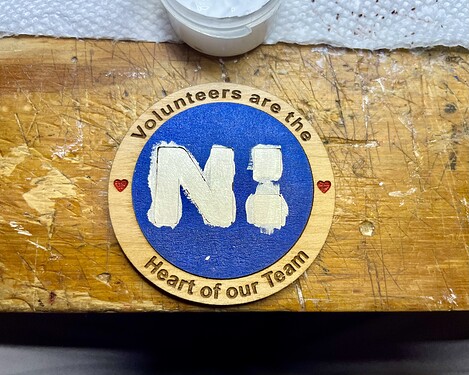 Worked out pretty well. The small amount of bleed I would get from time to time was easy to touch up with an ultra fine point brown sharpie marker. 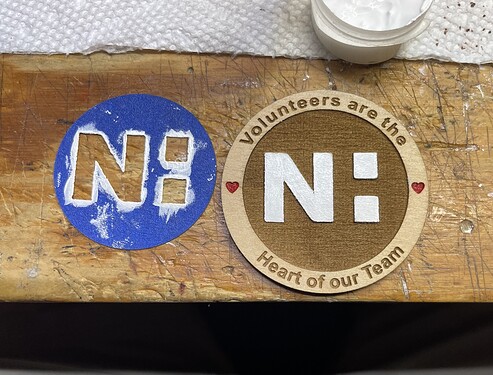 Lol, you have no idea

The badges look awesome. Reminded me of a big order I got once.

I started a pen-making business and the first order was 200 pens. I was so excited!
OMG, making one of something was fun but 200 was just mind-numbing.
The process I used on one was fine but the same process for 200 was not very repeatable.

After that order, I shut down the volume part of the business. Now I only make one-of-a-kind handmade pens.

Did you then glue 300 pins on the back of those?

Did you then glue 300 pins on the back of those?

No they were almost all self adhesive magnetic backs So that part went fairly fast with a little alignment jig I made. Did glue a few with pin backs for people with pace makers.

Oh, I forgot to mention that there was talk of doing 700 buttons at one point.

Of course while I was painting the 300 I was pondering easier ways to do them. Probably would do a pre mask and air brush the paint on before engraving.

Have you ever tried painting the whole surface a burning the paint away where you do not want it?

Yeah I have done something like that before. But in this case the rim needed to stay unpainted.

Have you tried the powder coat method of coloring wood in a laser? It was the first thing into my head when I read your task. I might have approached it like this:

Clamp or hold down your wood so it won’t move.
Engrave the logo first and as many times as will fit on a piece of wood in the laser cutter.
Spread the white powder coating across all logos and re-engrave at low power to melt powdercoat.
vacuum off loose powder coat.
Engrave the hearts, and add red powder coat, melt/re-engrave, clear excess powder coat.
Finish engraving and outline cutting.

So did you do this mainly on your new laser or did you use both of them to get it done?