My new extruder, in the flesh (colored filament).

My new extruder, in the flesh (colored filament). For i3 rework, p3steel, and any design that uses the 4 screw mounting system.
Bonus points if you can spot the design flaw that I need to fix. 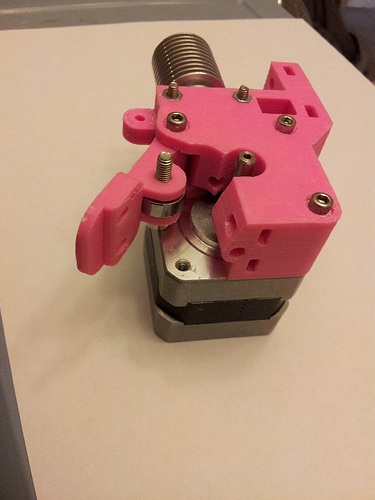 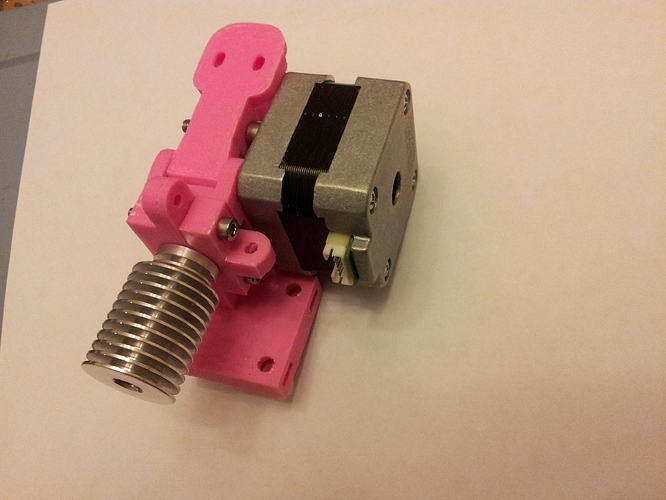 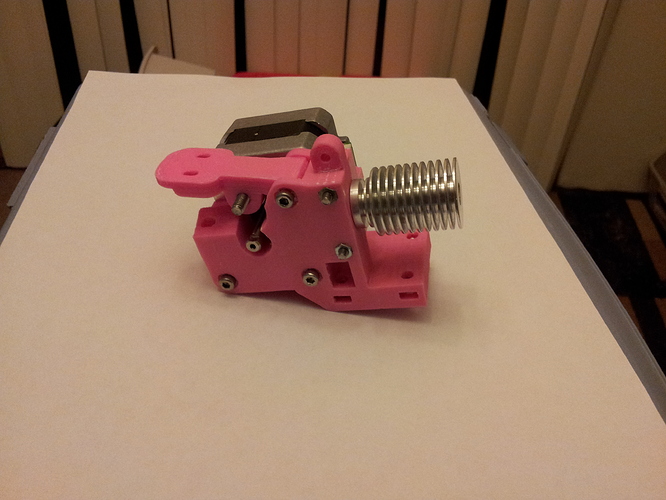 My only concern is regarding clearance for the drive gear and/ or whether the idler bearing will contact it. Seems a bit tight in that region.

Only three holes to mount a four whole base?

The idler hinge needs room to move. 3 screws is enougt as the torsion is low.
I’ve had the e3dv6 for a few years now.
The design is specifically for a mk8 drive gear. Clearance is 1mm around the idler and drive gear. Ptfe tube goes all the way through. I need to drill the hole out so I can puse the tube all the way through.
The design is on thingiverse. The supports need some work, but I was able to take care of it with a knife.

@Mark_Rehorst ​ nope. Though it requires a button head screw, which I don’t have yet.
The design flaw is actually a simple fix on a small part. The overall mechanics look good, the drive gear and idler will work.
You can see the flaw in the 2nd picture.

@Stephanie_A , where on Thingiverse is it? I’d like to give it a whirl.

Overall it has worked well but some items I’d like to fix would be to drill out the body to allow for the ptfe tube to extend from the hotend up through the extruder body to near the MK8 gear. Right now it’ll typically take a few attempts to feed new filament in as it’ll catch on the edge of the ptfe tube and not enter the hotend.

I’m not using the 4th bolt to hold the extruder body to the carriage (top left) cause clearance is a PIA, and it hasn’t been a problem.

I would consider reducing the depth of the clamp that holds the hotend in place because right now it looks to be sitting flush. And what I’ve seen is that over time I lost some clamping power and the hotend can twist. No doubt due to me using PLA

Lastly, even though the idler arm is relatively solid, I’ve had filament sometimes slip to the side of the bearing depending on how it was feeding in. I’ve played with various springs to change the applied pressure, and in the end having super tension didn’t seem to matter.

Tim, my design has the ptfe go through by default. I losely modeled it after the design you linked.

The clamp can be sanded or filed to exert more pressure, also dont use PLA for extruders.

Surprised nobody caught the flaw yet. The screws on the clamp interfere with the screw for the fan mount. If I were to add a fan, it would not fit.

This style clamp is tricky the get the ptfe tube in. You need to feed the tube all the way through, lock it, then trim it. The other option is to trim the top of the tube just before it enters the hotend, then butt up another piece to is. That way you can remove the hotend without need to completely disassemble it. That is because putting in the tube and cutting it is easy, but pulling it out would be difficult and likely damage it.

Thanks Stephanie. I will have a close look.

Yeah, I know we shouldn’t use PLA for the extruder body, but I didn’t have anything else at the time. There’s no doubt that the feeding in of the tube and clamping the hotend into place is a pain when having to take apart. Right now I have it just butted up so as a result you have to be sure and feed some filament into place before tightening so as to ensure alignment.

I’ll DL and try your part out. BTW, here’s a nice capacitive probe holder. I haven’t mounted it yet, but have a probe that I’ve been wanting to try out: http://www.thingiverse.com/thing:845610

I just updated the extruder to v2b, fixed the supports, fixed the fan mount on the clamp. Now (whenever I get around to designing the fans) the fan mount will be clear of the screws. this also makes the fan mounts the same distance from the hotend, meaning that fans will be interchangeable on either mount.

It does use a M4 button head screw, however you can probably file down a socket cap just a little bit so it will fit (~0.5mm).

That must be a part of a material to make!

@Tim_Sills PLA extruders had more potential to melt when they were the original Wades. The Rework Wades don’t seem to absorb the heat in the same way. I’ve got a couple of years and hundreds of hours on several PLA extruders used up to the limits of the v6 Lite or about 245*. I’ve got a Bondtech on the high temp machine. I don’t know I’d run the PLA extruders for the higher temp plastics.

@dstevens_lv , yes, I agree in that my PLA extruder has held up fine for all of the printing I’ve done (even PET @ 240). With the E3DV6, there’s obviously not much heat creep. But, I did notice over time how the hotend was twisting and had come loose. And I think it’s due to the clamp having slightly softened and stretched a tiny amount (like less than a mm). But fully tightening it no longer cinches down the hotend. I ended up putting a small piece of filament in between the clamp and hotend as a holdover till I figure out what I’ll do next…try Stephanie’s or move to a dual head setup.

@Tim_Sills Not to threadjack but I’ve got a Rework style X carriage that will fit two Wilsons. This one is for RJM11 Igus bearings but I just did one for an LM8UU but haven’t pushed it over. https://github.com/RoaddogLabs/Roaddog-Labs-BartXL-HD/tree/master/printed%20parts/dual%20extruder

You could take Steph’s variant and use it and a rotated version. Import into Meshmixer and flip it. I use the regular orientation Wilson and the motor on left Wilson in the above repo. Here’s a shot with both extruders mounted from one of the first prototypes a couple months ago. https://flic.kr/p/A6abwD

@dstevens_lv , I like it. Just DL’d it and will get the printer going on this and Steph’s extruder. Now just need to order 2nd E3D. BTW, was thumbing through your pics, like the one with what looks like Paul Tracy and his usual antics.