My Eustathios Spider V2 only likes to print Hatchbox PLA.

My Eustathios Spider V2 only likes to print Hatchbox PLA.

Do you have any tips on which setting to change in Simplify3D when trying other filaments? If the extruder temp isn’t near 250 degrees it will push the tubing that holds the filament out of the extruder and makes a big pile of filament spaghetti. This is with at least one Bowden clip in place. 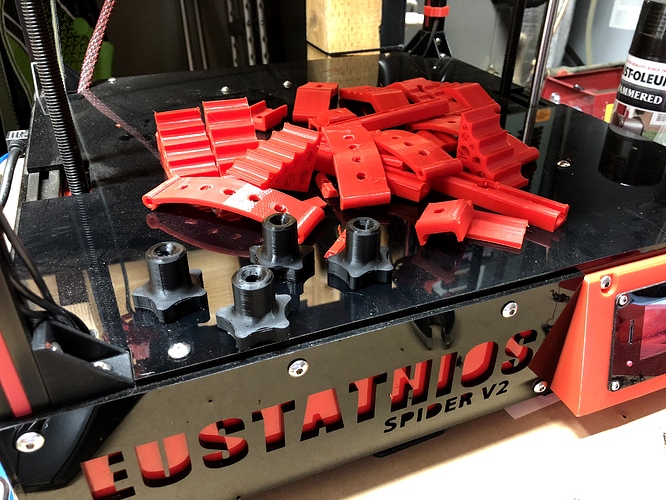 Have you double checked you actual temps vs. what the machine thinks its temp is? 250 for anything sounds high! I print PLA at 180-185 and PETG at 230 without a problem on all my pritners.

@Dennis_P I have never printed anything under 200 since I built this. It has always been 220 or higher. I’m not sure how I would check the temperature.

Use a thermocouple, you can buy a meter with one for under $20. FWIW all my E3D hotends read very high with the recommended firmware settings, some are off by as much as 25C.

Would this work? After I use it once I can use it for food.

Do you still have the HercuStruder, or have you moved to the Bondtech?

the thermistor’s are notoriously inaccurate but if the controller thinks its 250 when its really 200, who cares. as long as you know its +50, you can account for it.
i don think the thermopens go hot enough. remember 200C is almost 400F! Do you have multimeter with thermocouple temp option? the thermo couples are ~$10. a dedicated thermometer is handy when you need it-
this was the 1st cheapest thing that came up - https://www.amazon.com/Tigervivi-Digital-Industrial-Thermometer-Thermocouple/dp/B01NBH62UO/ref=sr_1_18?ie=UTF8&qid=1534954603&sr=8-18&keywords=thermocouple+thermometer
there is also old school temp-crayon from welding supply house-http://www.markal.com/temperature-indicators/thermomelt/
but that is pretty much go/nogo at the requisite temp, but i offer it just in case.

I use the same M3 threaded barrel style NTC3960 thermistor in my E3D knock off and it is within a couple of degrees. I use the same one in all my printers now for consistency. @Eclsnowman I guess you can call it the stock one. Which Bondtech model would you recommend. Seems like there are quite a few different models.

I think either the QR, or the BMG would be good. But if you are just pushing out the Bowden tube from the extruder nut trap on the “Hercustruder”… perhaps an upgrade to the nut trap on the extruder is all that’s required. I know someone replaced my nut trap design with a pnuematic fitting adapter that bolts in it’s place. I can’t seem to find the design now. But modeling a new top peice that incorporates a proper 4mm barbed pnuematic fitting on top might be all that’s required.

It’s pushing the tube out the top of the E3D V6. I have the nut trap on the Hercustruder.

I may have to try out the Bondtech BMG. Looks affordable and great performance.

@bcrazycramer I made a Saint Flint Extruder using a Mk10 drive gear and have been really happy with it. Initially, the gear that I used did not have sharp enough teeth so I didn’t work well. But once I got a new gear, it can really move filament! It was designed by list member +Michael Memeteau and a bunch of the quad rap folks like it. It might not be as nice as a Bondtech, and I have great respect for theBondtech folks, but the SaintFlint extruder is a step above the single sided gear ones.

Not your mother's extruder! Kidding... This simple yet very effective extruder is the brainchild of some members of the QR's community (in no particular order: Shauki B. / Mauro Manco (Exilaus) / Dale Dunn / Darkberg Aryavis (Flint Eastwood) and...

Yeah, but if the failure happens on the e3d hotend side try cutting the teflon bowden tube back a tiny amount to give it a clean end. And use a bowden fitting clip to keep tension on the fitting once clamped) The clip keeps the fitting from getting slack on the tube, hence keeping the barbs from loosening on the tube.

Bowden tube coupler clips to remove any play in the coupler's retaining piece. They can help reduce the amount of retraction needed if the retainer insert is moving during retraction and can help reduce wear on the teflon tube. There are clips sized...

The official original E3D v6 kit comes with a small bowden clip. I decided to recreate the same one so you can print replacements if needed. Additionally, you can print the larger one for use with the bowden pushfits also officially bought from the...

Glad to know my old Hercustruder design is still winning the battle against the hotend. If its pushing out the fitting on the hotend… Then its not a slipping extruder issue. So the extruder is not the first item to correct. Once we get the tube staying in the hotend, then we tackle the next thing to fail.

Here is my model of the Hercstruder nut trap adapted to 1/8"-BSPP threads to mate up to the threaded E3D Bowden fittings. I can remodel it with M5 or M6 if you need.

I had a saint flint then I went to a bondtech. Awesome upgrade it’s really the gearing the saintflint is a great design though