The design is open sourced and done in FreeCAD 0.19pre: https://github.com/goeland86/MonsterKossel 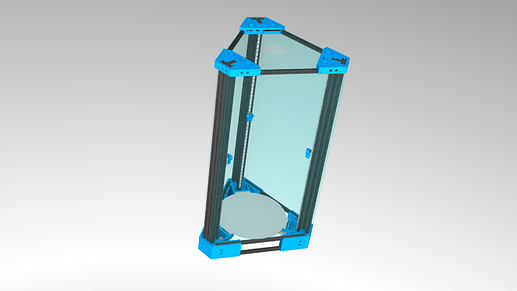 I’ve had the v2 iteration printing for a long time now, with varying degrees of success depending on what specific upgrade I was trying out. Specifically what changes drastically in V3 is that the whole drawing is done with FreeCAD where V2 was done in Blender.

For this big delta, there were a few key concepts I wanted to stick to as much as possible:

The remote drive extruder isn’t my own design, and hasn’t been officially released by the designer, so I’m holding off on that - but using a Kossel effector with a Zesty Nimble or Flex3drive is also possible. The carriages use the standard 40mm spacing between the arms - what the Kossel Mini and Kossel XL were designed around.

Pictures will be forthcoming of the printer as the V3 is being assembled. Right now I only have webcam shots of the bottom frame part being printed: 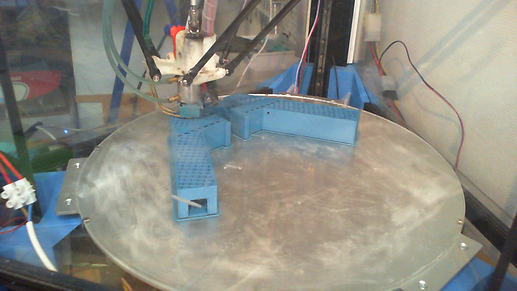 Wiring is definitely getting an improvement in V3 - so you won’t see any of the cables currently visible on V2. The bed is 350mm in diameter (just a little over 13.5" for you imperial folks). I hope this design appeals to folks who wanted a large delta but weren’t particularly confident in designing their own.

The telescoping shaft is, to the best of my knowledge, a world first in the delta printer space - I’d be happy to have that claim corrected however. I built mine from scratch out of square tubing, as nothing was commercially available to match the specs I needed. See a video of an early iteration of it in action here: https://twitter.com/Goeland86/status/1271207353896054790?s=20

Hi @Jon_Charnas, what is the actual build volume? I think this design might be relevant for the ceramic 3d printing community as we tend to print larger and with much thicker layers (so time is less) than the plastic people.

The design isn’t limited though - if you can find or make the bed plate to match, you’re welcome to use larger extrusions as needed. I built a v2 at the Oslo makerspace, and it was done with a 450mm aluminum machined bed.

I haven’t yet derived the lengths needed for the rods or triangle frame as you increase the bed size, but I think it shouldn’t be too hard to work out eventually. My build will run with rods that are 410mm from rod end center to rod end center.

I suspect that if you wanted to run with a ceramic extruder on it you would want to replace the nema17 with nema23 - again something that shouldn’t be too difficult, accounting for the modular nature of the bed/motor frame being removable.

The one at bitraf.no is just 400mm, though, and we’re struggling to find printable parts - please see email