Is there any advantage to the WS2811 vs TM1804 chips, in 5V or 12V applications? They seem to have very similar protocols, speeds, PWM rates, currents - and in some format the same price.

The modern ws2811’s (specifically, the WS2812B) has a really really small package - led + controller in one, this lets you make some really compact strips (144 leds/meter!) - I want to use it, not for density, but for flexibility - the small led package will let me do some fun stuff with clothing with it.

They are pretty close - in fact their data rate timings are close enough that you can run the TM1804 as a WS2811 (er, you could - that may not be true since I fixed the timing code, i’ll have to try again, especially since locus, uses a mix of ws2811’s and TM1809’s (TM1809 is TM1804 but drives 3 rgb leds instead of 1) and I’m using a prototype of parallel output to drive 24 lines in parallel

I believe the WS2812B’s have some reverse current protection (ever blow out that one led at the beginning of the strip?

Other than that, there’s no difference. The TM series is a little bit older than the WS2811’s, though, surprisingly, they haven’t come down much in price since the WS2811s were released.

I’m actually curious about getting my hands on more 12v strips similar to the TM1804. Some of the applications I am using them in require enough lights/power that the 5v power supplies are becoming ungainly.

Specifically I have a project with a large 36v power source, and getting a 36v to 5v regulator at 35amps (5 strips at 7A each) is nearly impossible. However there are quite a few 36v to 12v converters that can more then handle the amperage.

For the TM1809, however, which does drive 3 rgb led pixels individually, you can have 60 leds/m and 20 IC/m - in fact, this may be the one big win of the TM1809 over the other chipsets - 12v strips with individually addressable leds.

Alas, the WM2812B is inherently only for 5v, and it’s not yet showing up a lot in bullet pixels at any voltage.

One of the reasons I’m asking - I’m looking at Ray’s “technicolor” line (link below). They are a bit more expensive but the flat form factor will be useful and they have a good rep - and there’s an interesting set of covers available (C7, C9, 10mm sphere…). Ray can provide these with 2811, 1804 or 1829 chips. 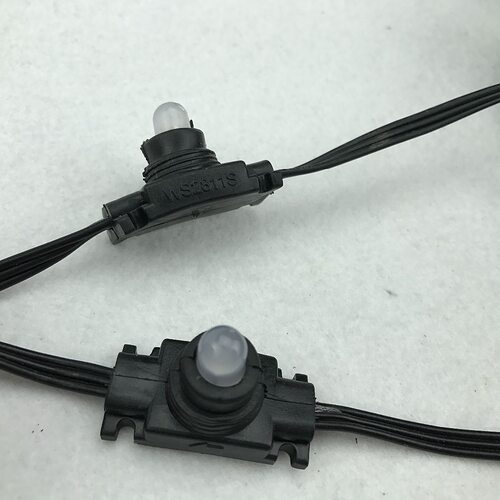 Search Ray’s site for “technicolor” to see the cover options, and some package deals.

As for why some 12V strips use 3 RGB LEDs per WS2811, it’s because they are connected in series, leading to three times the efficiency of the 12V single LED types, which waste most of their voltage drop in resistive dissipation. At the cost of fewer individuallly controllable elements of course.

For the blue or green LED elements, about 9V of the 12V goes to powering LEDs (in 12V individually controllable pixels, only 3V of the 12V goes into making light, the rest is dissipated in resistors or transistors).

If you had 12V strips with 30 LEDs and 30 IC’s per meter running at this rate, you’d be drawing 3 times as much current, with most of the power wasted resistively. But of course they don’t even make those, because it would run too hot.

However if you want a controllable element every 1.3 inches or finer, you can’t use a 12V strip, you’ll need a 5V strip that draws more power for less light - and uses WAY higher currents. High currents are a problem for longer runs - you need more power injection using heavier gauge wire and/or more and larger distributed power supplies.

For buying strips/chains of pixels, there’s not much difference between the WS2811 and the TM1804/9. Don’t go with the 1829’s yet - i have a strand here, but they’re not supported yet - and I believe I have the bare pixel version of what you linked to (just a board/led, no covering/diffuser).

I did try out a few TM1829’s using a modified NeoPixel library (while waiting for FastSPI2 support). At that time I was planning for a battery powered situation and especially hoping for lower dark current, but in vain. The current (npi) project is line powered so it’s not as critical tho I’d still prefer low dark current. If I did go with the 1829’s I guess I could limp along with that library until you have support, as I still prefer the higher PWM.