Howdy I have some neostrips (WS2812B) I put on my shirt and pants,

Howdy
I have some neostrips (WS2812B) I put on my shirt and pants, and I’m just tired of them breaking. Typically it’s the data line that breaks after repeated bending. often next to little hole that’s in the middle of the line trace, not sure why.
It breaks where you’d cut the strip in two, although resoldering doesn’t always work because sometimes it’s the trace under it that is broken.
Are there some heavier duty neostrips that don’t break as easily from bending (bending in the direction of the flat part of the strip, not up and down in the direction it’s not supposed to bend)
Thanks

I’ve had success with this item. Super strong and flexible, none have broken after two years. Only downside (for some) is that 4cm spacing is the shortest available. 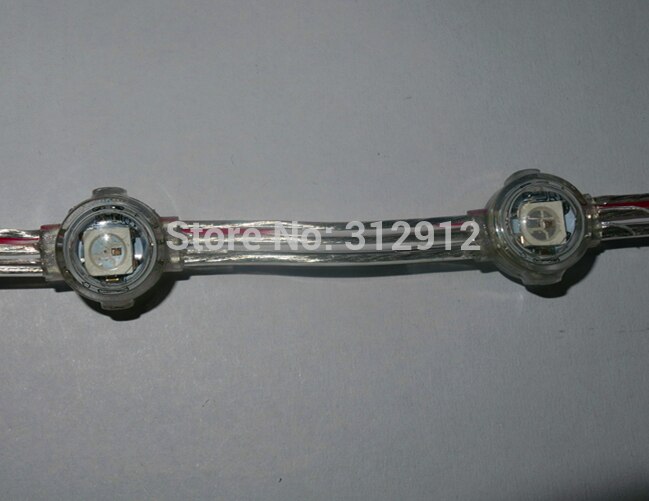 I’ve had some success sticking the strips onto a flexible backing, so that they still flex but are supported. Otherwise they flex (and break) at the weakest point, where the holes are.

The nylon strapping used to hold stuff on paletts is pretty good and is very lightweight, available in black and white.

@Jeremy_Spencer thanks. But I have to ask, why are there damn holes in the middle of the data line? As for ws2813, do they help if the data line breaks? I thought they were only for getting around a blown pixel?

@Marc_MERLIN I’ve only just bought some WS2813Bs and some WS2818s, I think they’ll help if only one of the data lines is broken…

@Marc_MERLIN I’m pretty sure that the holes are Via s allowing a connection from one side of the circuit board (strip) to to the other. Without them the solder pads would probably have to be on the back…

@Jeremy_Spencer are there 2 data lines on a WS2813B strip? I couldn’t find that when reading online… You’re right about the hole allowing the connection to cross the board, I didn’t think about that. Bummer that they make the strip more fragile.

@Marty_Fox https://www.aliexpress.com/item/40mm-spacing-IP68-WS2812B-LED-pixel-string-addressable-rgb-full-color-DC5V-input-40pcs-a-string/32261145173.html is totally what I need, except that I currently have 1.7cm pitch and going to 4cm is 3x less density

If anyone makes this is 1.5 to 2cm pitch, I’m totally buying.

@Marc_MERLIN How about making your own, the parts for these are readily available…

Or runnning two strips next to each other offset by 2cm, that would give you 2cm spacing.

@Jeremy_Spencer why not make my own? Because it’s 200 pixels and I value my time somewhat?

I’ve already spent almost 2 weeks of solid work on https://www.youtube.com/watch?v=SzZzCvanB8k
I’d rather not to boring and trivial stuff like wiring/soldering 200 pixels by hand.
Using 2 strips and alternating is not a terrible idea though. It would mess up my code a bit, but I could work around it if this ends up being my only option.

@Marc_MERLIN FWIW I checked with the Sam Wu store and they said they can go as low as 3cm.