Hey y'all. Been using Laser Web for a while now with a 2.5w Bangood

Hey y’all. Been using Laser Web for a while now with a 2.5w Bangood Laser attached to my 3D printer (Monoprice Maker Select V2.1) through the fan PWM connection. It’s been great for single operation jobs like etching my logo into a concrete business card holder that I make. Anyways… I’ve been trying to do a Fill Path on my logo + some text and then Laser Cut on a circular path around it. I have my settings locked in, but one thing I can’t seem to overcome is that during the last few lines of the Fill Path, the laser ramps to the 100% of the Laser Cut and then won’t turn off until the end of the cut… this includes the travel path line from the logo in the center down to where the circle starts… I can’t find anything that will fix this. I’ve even read the GCODE where the transition happens and nothing seems off. 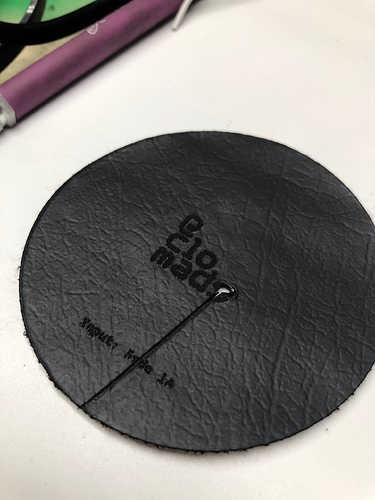 Does it preview on the canvas green lines that show the off moves?
Are you running grbl? Did you choose the generic grbl machine profile from settings?

@Ariel_Yahni_UniKpty I have Repetier on my 3D printer and I’m not sure I want to flash it to something else. Yes, the moves are in green. I started with the generic GRBL profile and changed some of the settings like bed size, tool on/off codes, and power range( 255 vs 1024)

Repetier is not a supported firmware in LaserWeb4.

Sure but in the 2 year of LaserWeb development I believe you are the first user with repetier.
Lets ask @cprezzi to confirm support

Kinda surprised by that considering the amount of laser mods I’ve seen for 3d printers, including the one I own. I guess most of them have used other software, but I really like laserweb and would love to see more support for this use case or hear from anyone who has any insight into my problem.

A push in the right direction is all I’m looking for.

Repetier is not supported because it doesn’t support S values in G0-G3 commands that we use for laser power modulation.

If your laser fires on green lines, then the laser power modulation is not working.

You still should be able to use vector cutting/engraving, if you configure TOOL ON and TOOL OFF accordingly to your firmware, but that doesn’t work for raster engraving, which always uses S values for laser power and only uses TOOL ON at the start of the gcode and TOOL OFF at the very end.

Some news on this topic:

There is an option to generate the laser power command on a separate line (settings/gcode/intensity separate line) and you can select the parameter letter for the laser intensity (default is S). This can help for Marlin and Repetier compatibillity.