Hey Lads. I have silly question. Can you/can we/Dentist/someone ect...

Hey Lads.
I have silly question.
Can you/can we/Dentist/someone ect…
Print a Tooth?
I mean like implant.
If you know what I mean.
Any tips,advice.﻿.﻿
What is a possible cost?

The second one is my teeth

Teeth are currently cnc milled. If you go the other direction and print them, they’d still have to be fired into porcelain and because of its manufacturing method, likely x-rayed to ensure quality.

Milling seems like it will remain the preferred method over additive printing.

@Greg_Copeland that agrees with what my dentist told me - that they have all the implants CNC’ed.

Temporary crowns can be printed. At least mine was.

It’s already part of the process in some cases (including 3D scanning gums and surrounding teeth), but to look like normal teeth, lots of different colours have to be layered. To the point where the opacity of the titanium screws to anchor the implants sometimes becomes an issue. 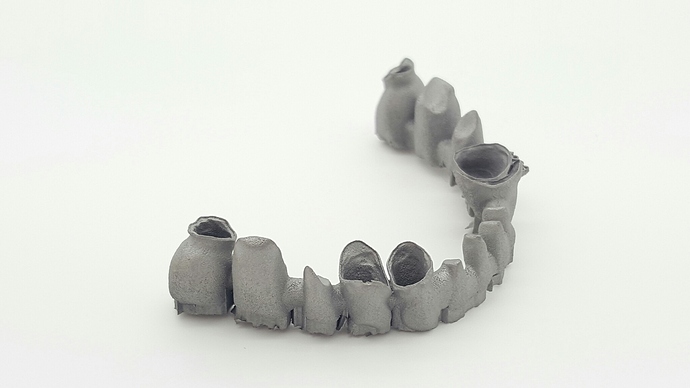 Stratasys has machines for the dental industry

Yes very much possible, even a 3 d reconstruction, of the bone is being done with an imaging technique called CBCT which further helps in precision placement of Implants…
BTW am a Dentist

In my last year I gave a presentation on 3d printing. While I was doing research on it, I was amazed to see the applications of this mind blowing tech. This can be not just used for making smaller things but it is rather going to take over the entire maufactring industries by storm which will inturn boost the world economy. About ur question it has already
been used for printing of prosthetics, ears, bones.

Idk about teeth, but I’m in the process of making my own invisalign. Lol
missing/deleted image from Google+

@OsCaR_FeLix Great … Your setup looks awsome … Which scanner is that ?

It’s called the cyclop 3d. It was a Kickstarter referenced by another Kickstarter (reach 3d printer). Just got done printing and setting up the scanner, time to see what it’s made of. Lol

@OsCaR_FeLix All the very best …
Do post the results !

@nayeem_khatib definitely! Will keep you posted.

@OsCaR_FeLix awaiting . Thanks a ton