Hey everyone, I am trying to get my Ray Wu WS2811 led's working with

I am trying to get my Ray Wu WS2811 led’s working with FastLED and my NodeMCU ESP32 and I am running into problems with the LED’s flickering like crazy or not lighting up at all sometimes. I have tried many things and can’t solve this puzzle why it’s not working. Could anyone take a look at my setup and see if they notice anything bad?

This is the NodeMCU I am using: http://a.co/jfGiShk

I am using the Adafruit level shifter to convert the data signal from 3.3v -> 5v which should still work ok with 12v pixels from what I’ve been told.

Any help would really be appreciated because I am just stuck. I thought it was a grounding issue but I am pretty sure I have grounded everything properly. 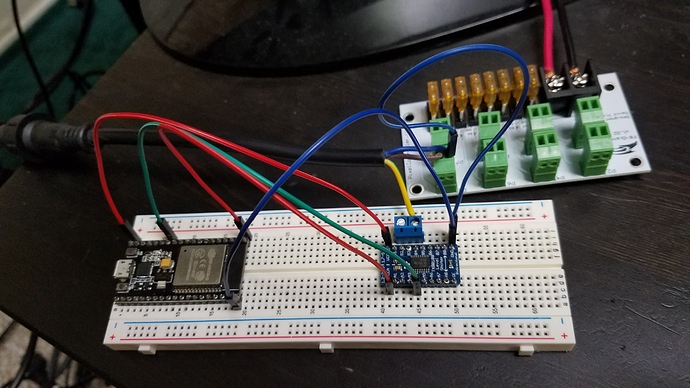 Those level shifters are notorious for not working with addressable LEDS. Might try it without it, or with a 74HCT245 or 74HCT125, which are known to work great.

@Jason_Coon When you say “those level shifters” are you referring to that exact one or just adafruit level shifters in general? I did try it without and could not get it working either.

@Jeff_Sheiman could we see the code ?

@Yves_BAZIN I am just using the RGB Calibrate example from FastLED - nothing special.

I am using this line uncommented and changed the data pin to 12 but other then that haven’t modified the code.

@Jeff_Sheiman I mean the Adafruit level shifter you’re currently using, as shown in the picture. The 74HCT245 is the only level shifter that is highly regarded around here, as it always works. Here’s a great article on the subject: https://happyinmotion.com/?p=1247

@Jason_Coon I just ordered a few 74HCT125 on adafruit because the 245’s were out of stock. Are they just as good as the 245? Thanks for the advice! Hopefully that does the job. I think I need to buy an oscilloscope. Does everything else look to be in order though?

BTW, the power supply going to the pixels is 12v using this power distro board with a 12v 30amp PSU hooked into it. 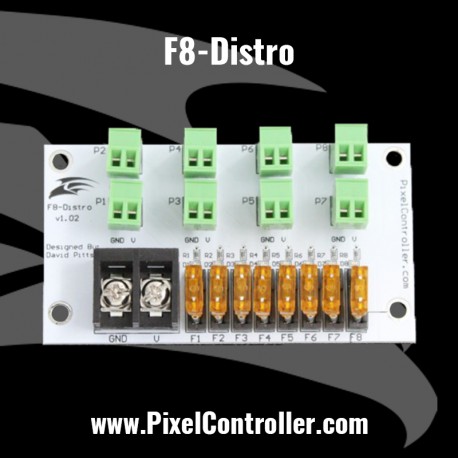 The F8-Distro Board is an eight port power distribution board. The board has one 30amp power input connector and eight 5A connectors. The connectors are pluggable connectors for easy connect/disconnect.  LED fuse indicators (8). Connectors...

add this to your code
Did you had the
#define FASTLED_ALLOW_INTERRUPTS 0
#include “FastLED.h”

the code in the gist allows you to run the code fastled.show on core 0 which help coping with interupts due to wifi on core 1

@Yves_BAZIN Ok I will try that the first chance I get! Thanks Yves. I’ll update you once I’ve given that a go.

Even though I use 74hct125 exclusively as well I’m confused that even adafruit recommends the txb0108 for neopixels. 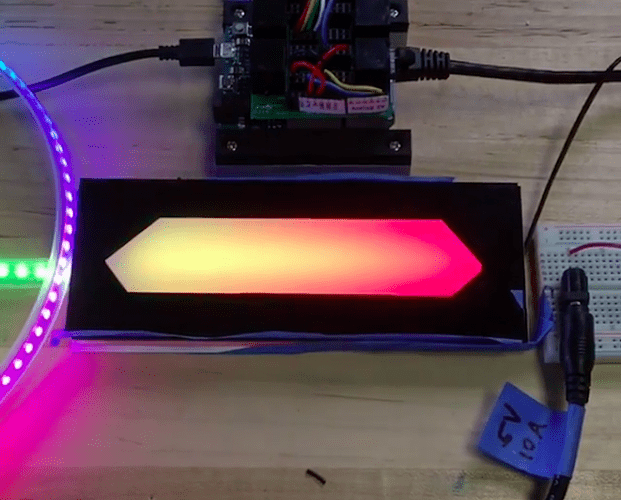 NeoPixels rule! But, they expect 5V logic, which can cause them to act funny when controlled by 3v3 boards, such as Feathers, M0-based Arduinos, Teensy 3, and others. Not to worry! A level shifter can translate 3v3 logic to 5V and get things talking...

NeoPixels rule! But, they expect 5V logic, which can cause them to act funny when controlled by 3v3 boards, such as Feathers, M0-based Arduinos, Teensy 3, and others. Not to worry! A level shifter can translate 3v3 logic to 5V and get things talking...

Removing the level shifter did the job folks! I must of grounded it wrong the first time I tried. Thank you everyone!

Nice! I was going to suggest removing the level shifter – most of my ESP32-based projects seem to work fine without one.