Hello! I'm trying to run a gcode file generated by the current version of

Hello! I’m trying to run a gcode file generated by the current version of Carbide Create (313) on a Shapeoko 3 running GRBL 1.1. I’m using the “jpadie” version of ChiliPeppr, on OSX, with Chrome browser, and serial json server 1.95, compiled from GIT checkout, on the same computer as the browser.

When I drag the file onto the ChiliPeppr window, the “drag a file” prompt appears - but when I release the file, the file isn’t loaded. I can only load the file via the GRBL Workspace menu.

The preview looks correct…but if I click on the play button to simulate, the virtual tool slowly raises, and then ‘slams’ back down. That’s it. Does it on multiple gcode files I’ve generated with Carbide Create.

The gcode ‘widget’ shows 256,000 lines loaded, but my gcode is only ~900 lines. And when I click the “play” icon in the gcode widget…nothing happens.

I am able to send the default gcode chilipeppr opens with, so generally speaking, gcode sending works. And the file sends OK with Universal Gcode sensor, so it doesn’t seem like the gcode files I’m generating are invalid. 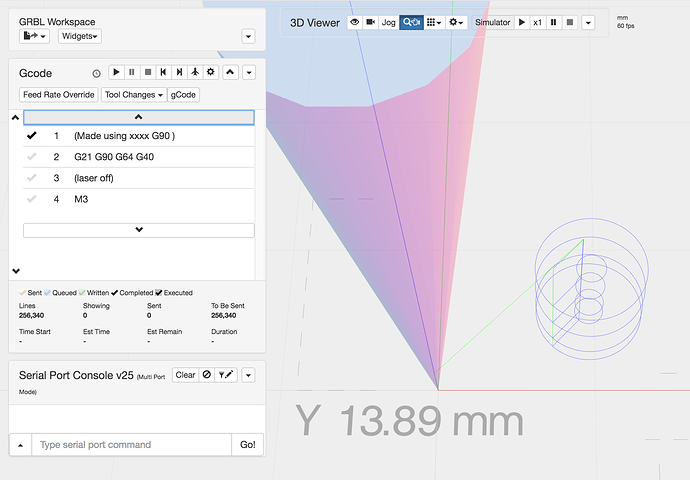 If you open the Javascript console in your browser, what error shows if any? Are you using a browser other than Chrome? The 3D viewer is showing something, but that can’t be 256,340 lines for that simple of an object unless something is really wrong with your Gcode generator.

I think the drag drop is the standard widget. So also try using other workspaces for the drop and seeing whether the oddity persists. That will help diagnose.

@jlauer as my post says, I’m using chrome, and the gcode file is in fact not 256,000 lines. @Justin_Adie , thanks for the suggestion - I will try. And thank you for your version! If I can get it to work, I think I’m going to really like using it. I was able to get the example/default gcode to run and liked it…