Don’t think I am meant to have a laser…

So after getting it back up and running by replacing the board, it was working like a dream. Then I shut it off one night, next day turned it back on and poof, tripped the breaker. Turned it off went and reset the breaker, poof same thing. Checked the fuse and it had been blown to hades and back. No where local had them so had to order some. Got something else in today that has the correct fuse (250v 10amp 5mmX20mm) and thought awesome, here we go! Poof, trips breaker. Unplug everything in the room so that it is the only thing pulling power, poof. Plugged it straight into the wall, poof. So I got to looking: unhooked everything from the power supply, turned the laser on and the fan spins up like normal, turn it off unplug it and plug the power supply back in, turn it on: poof. But due to having the control side of the laser open, I was able to see a bright light around what is shown in the picture, and audible pop. There is then that “ o zone” smell?? So first the board and now I think the power supply has went out. Your thoughts? 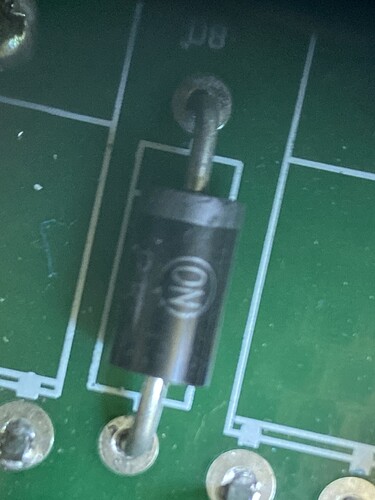 Which fuse are we referring to, the main fuse in the back of the machine?

unhooked everything from the power supply, The LPS?

turned the laser on and the fan spins up like normal Which fan?,

turn it off unplug it and plug the power supply back in, turn it on: poof.

But due to having the control side of the laser open, I was able to see a bright light around what is shown in the picture, and audible pop.

Not sure what you mean by “the control side open”. Do you mean the cover on the LPS was removed?

So first the board and now I think the power supply has went out.

What board are you referring to?

Please fill in all the blanks Don placed for you so everyone can better understand what you are describing.

$0.02, That part in the picture is called a diode and it’s job is to let electric current flow in one direction and block it from flowing in the opposite direction. If you are seeing arcing across that diode then I can only guess your showing a part in the high voltage(HV) section of the power supply. ANY HV arcing would make me check to see ALL of my wires connecting from the HV output of the LPS all the way back to the L- of the LPS are properly connected.

$0.03, when an electrical device blows a breaker, the ONLY time I might repower the device after the breaker was reset is if there were other devices on the same circuit and the possibility of too many high load devices caused an overload and NOT a device failure situation. Trouble shooting by unloading and then slowly loading back up is something to do with caution and a fire extinguisher nearby. Also eye protection.

That diode does look like it has a cold joint!!!

Which fuse are we referring to, the main fuse in the back of the machine?

Yes, the one in where the power cable plugs in.

Sorry, does LPS mean the blue box in the control panel?

The stock fan that came with the laser.

Not sure what you mean by “the control side open”. Do you mean the cover on the LPS was removed?

This is what I refer to as the control side: 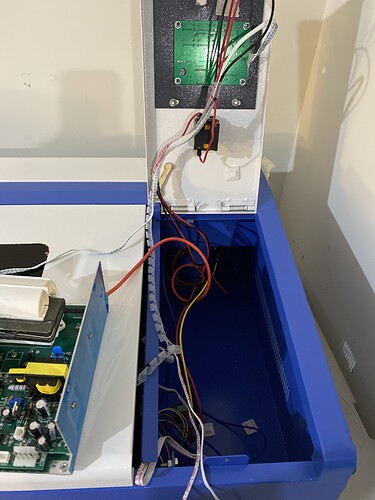 What board are you referring to?

Sorry for the confusion and lack of details. Still new to electrical processes.

Now with that all said, I removed the power supply box and was taking the cover off (to get better pictures of what I was talking about. When I looked under the power supply board there was a random screw which to me seems to have some burn marks on it. No clue where this screw came from as nothing is missing.

I have since removed it. Let me know if you need more or better pictures. Again, thanks in advance for everyone’s help. 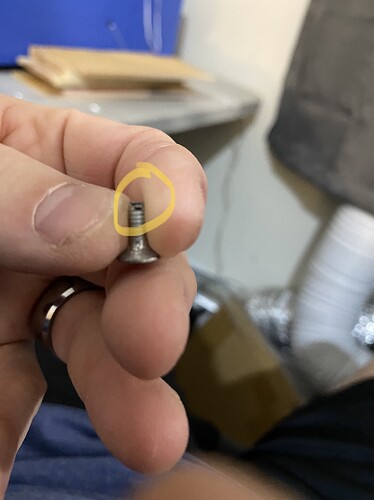 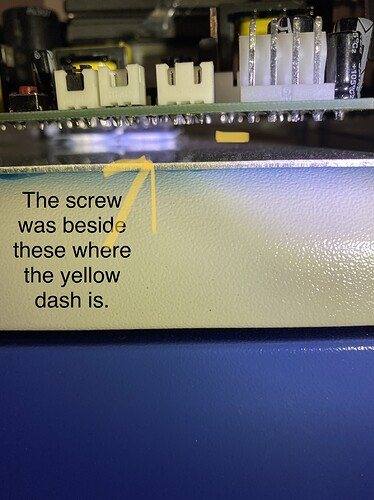 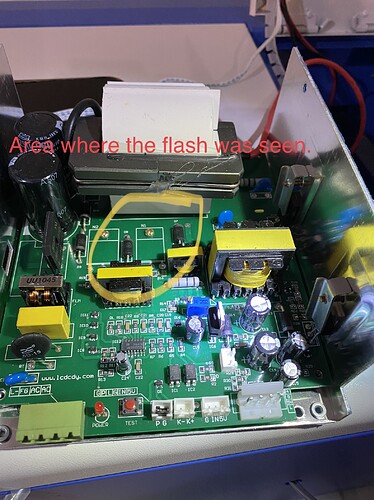 What do you guys think, the 24VDC or 5V was shorted out by the screw but no idea why it might cause the flash back in the HV section unless it effected the laser triggering circuit. Anyways, I think Don has a LPS( Laser Power Supply ) troubleshooting list which probably starts by having everything disconnected but AC input to the LPS and then low voltage measurements( 24V, 5V, etc ), pushing the Laser Fire button to see what happens, etc…

There’s a good chance something else went wrong/failed when that screw shorted out parts of the LPS circuitry.

I just took mine apart, also read about the piece of swarf trapped in between mosfet and case and shorted out his mosfets. In one of my recent threads,

The mosfet is insulated through the bolt hole. Adleast on mine it is, some of the secret magic Chinese mosfet shorting dust might have actually popped it. Curious to see under board and mosfet.

Looked like silicon carbide crystals in my mini mosfet heatsink pase in between the silicone before i re did it.

Could the flash he saw have been the mosfet case arcing and shining through fiberglass making it appear right by the screws?

I don’t have any evidence that the heat syncs are insufficient.
What about now?

Also what would make that a easy and safe guide write up. Discharge all your caps to youz dont gets zapz.

Thanks again for everyone’s help! Hopefully this will be it for a while. Out of abundance of safety, I just went ahead and put in the new LPS (and checked to make sure there was any more random screws floating around!) and she’s back up and running.

Glad your running again.
If that screw was the problem then thats “a new one”.

I just went ahead and put in the new LPS

Guess where he got the new LPS.

He was in a hurry to get his machine working again so I sold him my spare that I ended up with after my recent travails with my own LPS. Did the deal in the parking lot of an ACE hardware store.

you’ve been a BIG help! It was in deed done in the parking lot of a sketchy ACE hardware store… Closest thing to a drug deal I have ever done.

Our local police department has what they call a craigslist parking section in which you can make your “purchase deals” in a safe spot that is monitored.
I had one guy charge me extra because he had to bring a planer there for me to purchase. I told him I don’t mind paying extra to make sure we are both safe.

Our local police department has what they call a craigslist parking section in which you can make your “purchase deals” in a safe spot that is monitored.

That’s a nice service to have.

I know my local PD has a child swap area, but not one designated spot like that. But hey police station fire department, like you said as long as you feel/are safe, and to @NedMan credit, I’ve lived here my whole life so I knew the area and who I was meeting.

I hadn’t thought of this type of service before so I went looking to see if our PD did offer this service. It turns out they have since 2017. @Jason_Harrison 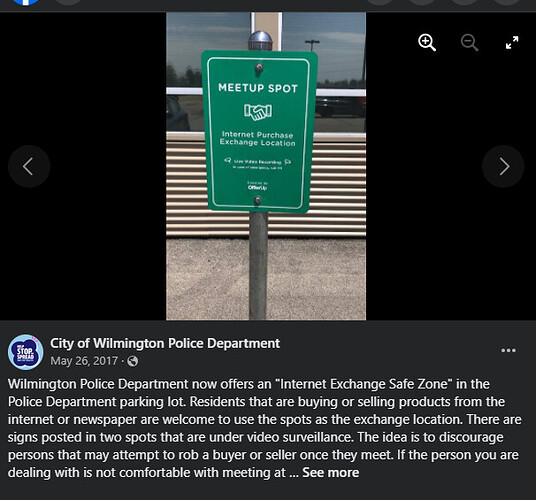