Changed the junk air motor to this one.

Changed the junk air motor to this one. When testing them side by side this new one seems a bit less powerful.
But hey, it was only $15 and if it doesnt do the job, i just change it for something else

What do you think, yay or nay? 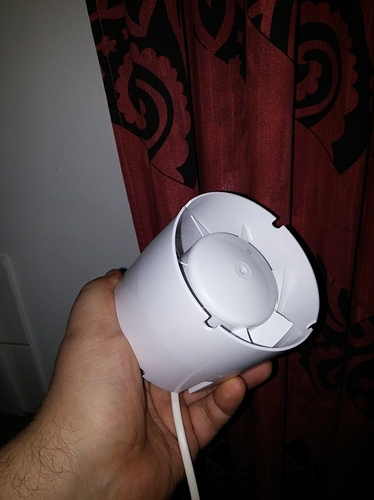 What’s the link to it

It´s in Swedish, i translated the data below

Almost as a regular computer fan, didnt notice that until now

Maybe i´ll do a test with stacked 120mm fans too

The problem is that it’s not a squirrel-cage fan. It cannot generate a high amount of static pressure. It might be able to do 63 CFM with absolutely no obstruction, but it’s got so low static pressure that it can’t overcome obstacles/turns/restrictions.

I’ve read regarding stacking fans (as I thought similar to use multiple 120mm fans) doesn’t really increase the output a great deal (definitely not double). I’ve thought it may be possible to funnel multiple side-by-side into the exhaust tubing.

Tried the tube-fan i showed pic of above, it “worked” but it didnt remove the smoke quick enough for my liking.
Was thinking about making positive pressure, by having fans in the front blowing in, and fans in the back taking it out, to get a better flow trough the box, without the need for monster fans.

Your ideas and tips are highly appreciated

The fan should always be the last thing in the hose… So it pulls a vacuum on the laser and doesn’t have to push air through the hose as well… That way it will never push smoke into the interior of the building.

@William_Steele Good thought, what about having the fan included with the laser at the back, and the new one i bought at the end of the hose? Maybe a bad idea, was just thinking if you got any experience on that

I don’t recommend a fan on the back of the laser… if there is any imbalance, then you’ll wind up blowing smoke into the room.

@Phillip_Conroy how loud is that thing?

Very quit,it is 2 meters out side and can just hear it running