When every late night show host (temporarily) dropped Trump jokes for Pokémon Go jokes merely half week after the game’s release, I knew I couldn’t ignore it any more. But I do not have a TV show to host. “I found one on my Mini Kossel’s print bed. Does that count?” This 3D printing Pokémon Go joke (Sign in - Google Accounts) brought me back to Thingiverse, and found this incredible, nay, impossible design. (http://www.thingiverse.com/thing:394476/)

How impossible? The model stands 8cm tall with an average horizontal cross section of 4cm^2, arms extending 1.5cm outside the trunk at 80º, ears extending 2cm at 85º. But the touch points at the base are two tiny feet totaling less than 0.5cm^2, with a rapid arc overhang into its crotch to boot. (Additionally, its vertically extended tail, even when assembled, does not act like a support like other Pikachu models. It is impossible to balance by itself after assembly.)

The first time, I used CuraEngine slicer plugin included in Ares (OctoPrint). I thought Ares’ default settings includes support, but the G-code only included a few single-width pillars below the crotch, nothing for extended trunk and nothing for extruding arms and ears. But bridging gave no trouble to Ares, at all. The printer head knocked on the ear as it began to grow badly and poor Pika’s feet couldn’t hold it. There were odd screech-knock noises in the last few swipes so I knew it wasn’t going to end well.

I have not had too much success with CuraEngine plugin on Ares so I naturally wanted to return to KISSlicer. One question I had to ask was whether to use support. With the odd design elements, I imagine support is going to be as expansive as that fighter jet. So I decided to not use support. At least I’ll give it a shot given the extreme grip that the Harbor Freight blue tapes have. (The fact that the first build did not fail at overhang gave me more confidence in Ares’ capabilities.) No support, but grid brim. The second build lasted longer, but merely by a handful of layers before it, too, got knocked off feet. The same screeching noise. Additionally, the grid brim is very difficult to remove, especially on the flat tail.

Then I got busy working with new filament (Sign in - Google Accounts) clear glass with glue, and so on. Pika had to wait. But not for long. After failing to complete 3D Benchy on glass bed, yet again (Sign in - Google Accounts), I sliced up Pika deluxe against GP3D filament. This time, I used pillar brim. I also gave bed surface a new twist: I applied the Playskool glue stick to Harbor Freight blue tapes. Presumably this should reduce adhesion, given how strong Harbor Freight’s tapes tend to stuck with the bottom layer.

I nervously watched the nearly 2-hour build. No screeching noise this time. At several moments, I thought I saw the model swaying, although this could be illusion. In the end, Pika appeared whole!

As expected, pillar brim is easier to remove, although on the flat tail the brim still sucks. I checked bridging on the hangovers, especially behind the long ears. Although some roughness is visible on the surface, overall bridging is extremely successful. I am not even sure if adding support would have helped on such a narrow structure. (To add to the excitement: This is also the first model I did that requires a mechanic fit.)

OK, you late night Pokémons can all Go back to Trump jokes. (Pika was built before the DNC scandal broke.) 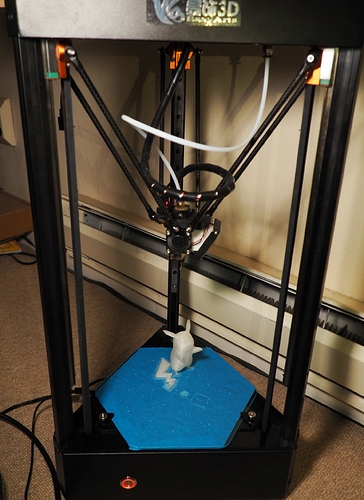 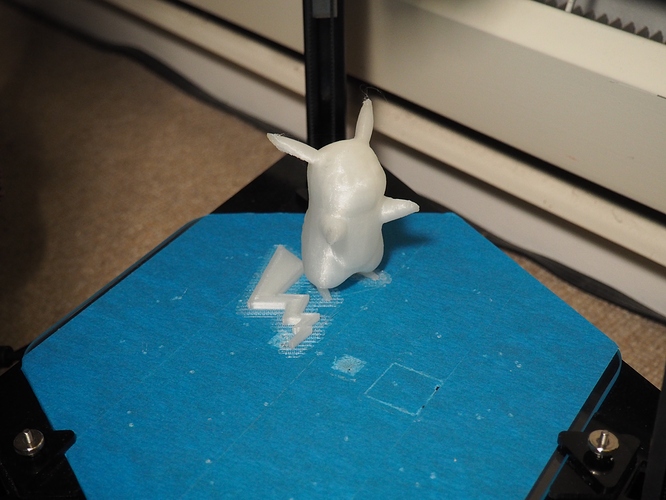 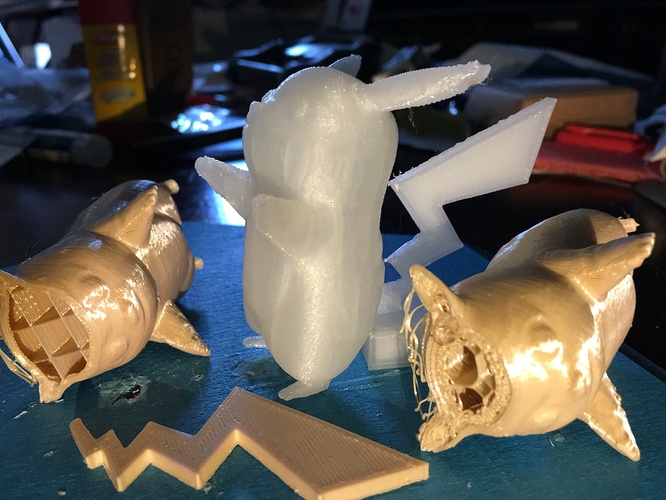 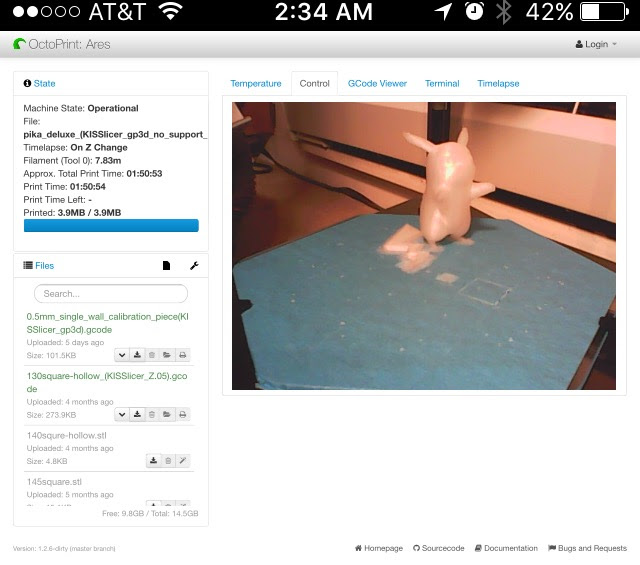 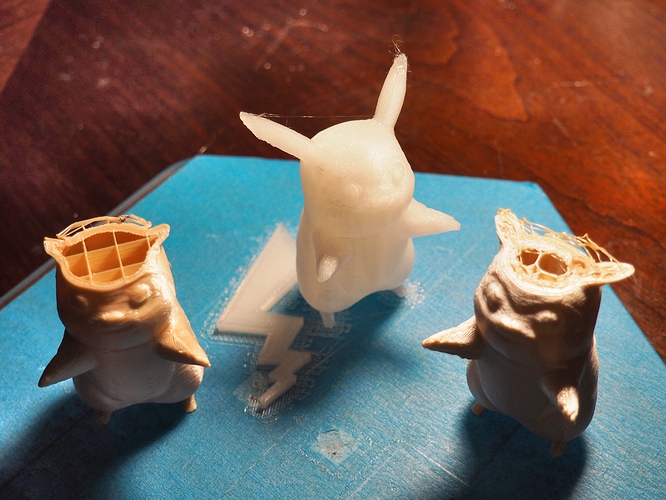 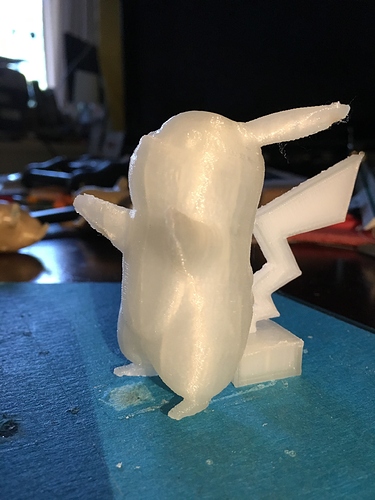 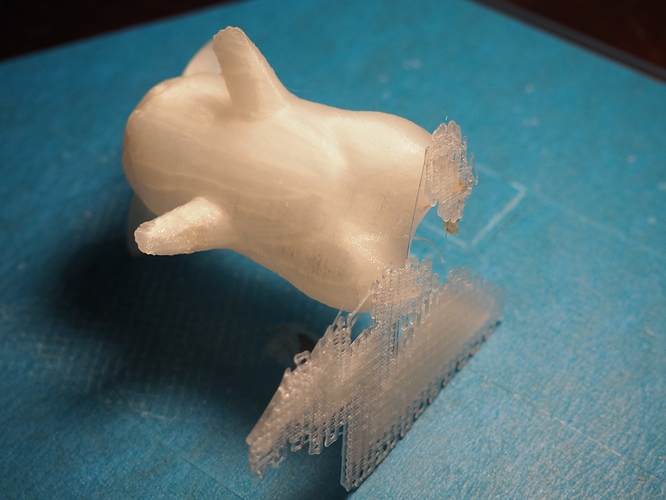 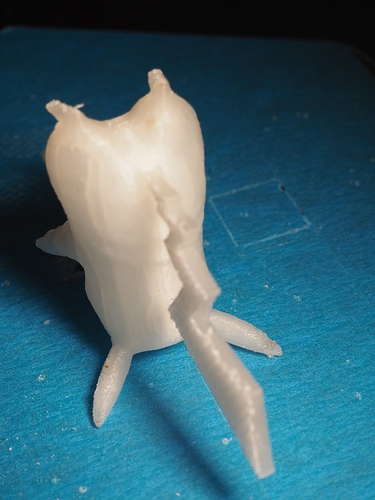