3D printing is great and its good for the environment, especially in this case.

3D printing is great and its good for the environment, especially in this case.

The lid for my coffeepot broke. Its one of these ones that fit tightly with the coffeemaker. Maybe I could buy another pot, but under normal circumstances I would have gone out to buy another coffeemaker.

This time I have a3d printer, so I decided to make real use of it. I set myself up to fix the lid myself.

The lid came apart easily. It is quite complex mechanics and fortunately the lid is not glued, but just clicked together. Two major paths made the top and bottom of the lid and a number of smaller parts made up the locking mechanism. The broken part was the largest and most complex part and I sat down with my calipers and my openSCAD program and started to design.

After a few hours I had a design. My first print was not accurate and needed some adjustments. Second print was fine and the lid now works even better than before.

The white thing at the bottom left is the new printed part. At the bottom right the broken part is shown. 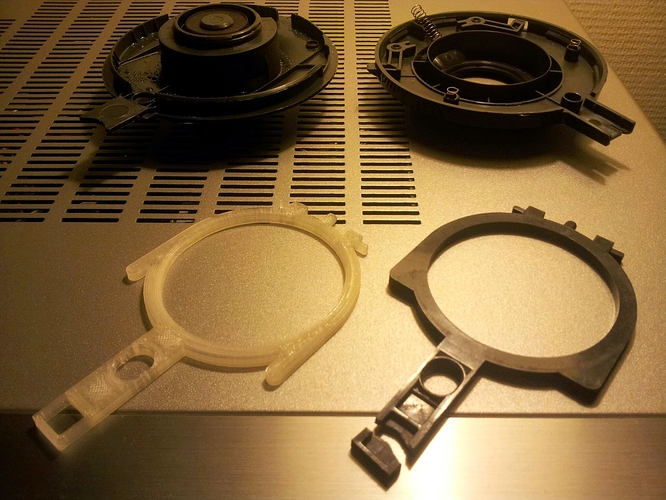 great now share your design, as .obj file with others on the web so they dont have to waste theire time on this too.

Maybe he should get the coffee pot maker’s permission before doing that. Since it is based on their design, they may raise a fuss.

Very cool. Can’t wait to fix something with my 3d printer…

John may have a point. Is this outside of the area that would have steam hitting it?

Its a part inside the lid, not in direct connection with hot coffe or steam - I hope

Good luck with it.

Well we’ll, things wasn’t just joy and happiness. The heat from making coffee actually softened the PLA and made it fail. @John_Chan_Madox was right. I need to go to ABS. I’ll keep you updated.

PLA is almost useless other than for casting and for pretty toys. It is too brittle with a low melting point.

I would use ABS/nylon for any replacement parts.

Well, your repair may have failed, but you learned something. Meanwhile, maybe you could fix it with a bit of aluminum foil and a lighter to melt the broken piece?

Yes, true that I did learn. And now I do have the working design, to adjust and print until I succeed

Last night I printed the part in ABS. Now I have to use it for a few days before I can say its stable. I made it slightly thicker and had to adjust outer measures a tiny bit. The lid works perfectly after mounting this new part. I’ll be back with final results after a few days of coffeemaking.

Made coffee two times today and the lid still works without any sign of deformation on the new part.