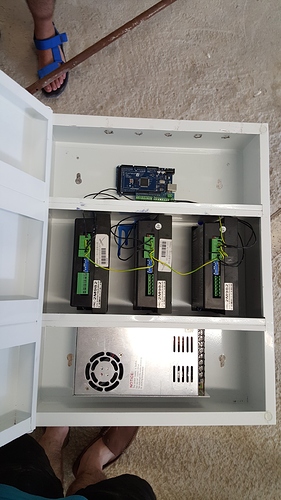 Wow. Very nice. Do you have the model name of the IKEA cabinet?

It is’ actually metal and therefore perfect for the purpose. Excellent spotted.

I predict that you’re going to find your components failing earlier than usual by running it inside a closed cabinet like that – especially if you put the hottest running components at the bottom (the PSU), and the coolest components (Arduino) at the top, with no apparent airflow between the three sections.

@Dan_Berry That is why we put three fans on the door, each one blowing to one of the sections. Bear in mind the door does close with a 3 mm air gap.

How can you see what up or down for sure

@Henrik_Larsen if you look at the keyholes in the back you can see it can be hanged both ways (door open to the left or open to the right).

That’s what i mean. So how could @Dan_Berry ​ possibly predict your components will fail, only based on how the picture is turned

I think a better place for A fan might would be on the side or top, with maybe a hole or two in the shelves. But if you really want to get creative, just turn the whole (metal?) thing into a heatsink…

@Henrik_Larsen As Miguel already pointed out, the hanging holes give a good indication which direction the cabinet hangs (hint: it’s in the proper hanging position my mistake, it allows for both). Regardless, if you put heat-generating components in a box without any circulating cool air then you might as well not have any fans at all. @Miguel_Sanchez has since stated he’s putting 3 fans on the front, which he didn’t show in that picture, so that will help. It won’t make a difference if the objective is to reduce noise (the air circulation fans will be noisy), but it will be orderly.

I’d be willing to bet he won’t have any heat issues just the way it is now. I would defiantly do some testing (run it and see how hot you can get it) before I cut any new holes…

I have the machine running for a couple of weeks with the door closed and the fans on. No problem as it is all ijust lukewarm.

As for the noise both the milling bit and the vacuuming system both are way noisier than the fans in the shop.

Bear in mind this is just a hack not to spend almost ten times that amount buying a cabinet engineered for the purpose.

I understand @Dan_Berry concern but I’d bet we would have not trouble even without cooling, as our first days it was hot in here at 35C and we did not have the fans yet.

@Miguel_Sanchez You should have some fun with it. Maybe use the CNC to cut some windows in the front. Letters spelling out something even. Add some internal LED strip lighting. Paint it up fire engine red like @Michael_Jacobsen did with his…