wow!! HeeksCNC from Dan Heeks ​ has really come along way since I last tried

wow!! HeeksCNC from @Dan_Heeks ​ has really come along way since I last tried it. Great Job Dan.

If you are interested in this awesome opensource CAD/CAM software read about it and buy it here: https://sites.google.com/site/heekscad/ (£10). There is also an Ubuntu PPA and source code available. 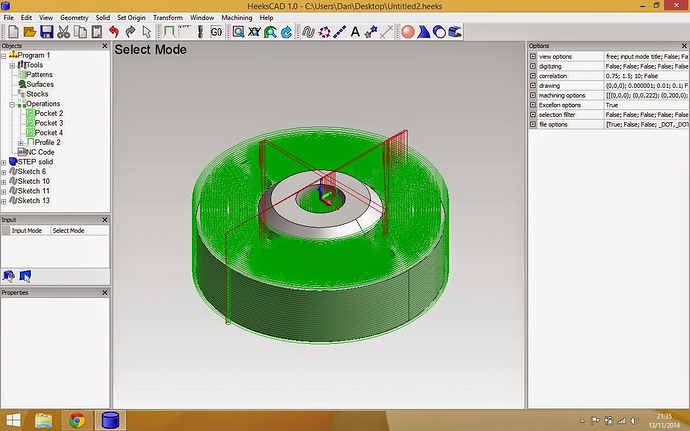 I’ll have to check it out. Thanks for the link.

@Dan_Heeks maybe you could specify a bit what the customer is getting when he “buys” open-source software for 10 GBP? It’s not spelled out very clearly on the website frontpage.

@Anders_Wallin so its clear for other members.

There is only the windows version that is available for purchase. As I understand this is the main focus for the development and bug fixes.

The windows version also features a really simple and quick simulation which is great.

Ubuntu is my daily driver OS but I have purchased the windows version to try and support @Dan_Heeks and encourage furthur development.

I think its under priced at £10 and i would willingly pay more if i knew it was being actively developed and it looks like the guys have been busy: https://code.google.com/p/heekscad/source/list

Hopefully @Dan_Heeks can leave his thoughts.

Yep, the key is knowing that your money goes to the right people and towards developing better open source software.

With any big piece of open-source software there are however going to be tens of libraries used (opencascade, wxwidgets, librarea, etc. etc. for heekscad), and it seems wrong to just pay the one developer who has time&patience to compile the thing for window$ ?

But maybe that is how it works - people are probably gladly and unknowingly paying for free open-source software on google play or itunes and the money goes to whoever is ‘clever’ enough to ask for it.

@Anders_Wallin ​ I completely understand your opinion especially considering your work on opencamlib and openvoronoi.

Heekscad is opensource software. Its freely available if people want to compile it or use Ubuntu. Windows users can pay £10 to get an executable with support from @Dan_Heeks ​ via email for any problems.

I think its a brilliant idea if it helps the development of heekscad.

Anders, I did wonder about how you would feel about me selling HeeksCNC with your opencamlib included. But I say on my website, http://www.heeks.net, that it is completely open source, so as I saw it, I am just charging for my work in making a tidy Windows installation, writing some online help, replying to emails from people who have bought it, fixing bugs. I am selling just over 1 per day, so I’m not going to be retiring on the proceeds of this project, but it has been worth my while setting about making a version 1.0.
It won’t have paid for all my time developing open source CAD/CAM software, but I was never asking to be paid for that.
Yes, I think almost all of my customers are happy to have an installation that works for Windows and don’t care that they can get a completely free version for Linux, or even build their own version for Windows if they can work out how. Those who are clever enough to be using Linux, or to be software developers are not those that I am aiming at with HeeksCNC 1.0 for Windows. I always knew that making money from open source software would have to involve more than just writing it. Maybe you should make a Windows version of HeeksCNC and sell it from your website? If someone wants to make an Android version or iPhone version ( not sure even how possible these would be ) they don’t need to ask our permission, or pay us a royalty, so long as they provide the source code, that is the spirit of the Gnu Public License.

OK - thanks for the explanation @Dan_Heeks . Maybe you can put some of that text on your website?

Did you resolve the issue where most people were keen on seeing the python terminal output when a g-code generating script runs?

What about OpenMP and multi-threading? Last I checked the free compilers from micro$oft did not produce multi-threaded code, so on a modern CPU 5 of your typical 6 cores are doing nothing? Or are you using a paid compiler that does support OpenMP?

Anders, sorry, yes I should have put that info on my website. It is now here https://sites.google.com/site/heekscad/home/Details, which can be got to easily from several places on the main page.

I have added a print window to HeeksCNC, and you can see the progress bar output by opencamlib, it reassures you that it is still working. see the bottom of this page https://sites.google.com/site/heekscad/help/surface.

No, I’m not using multi-threading in any way.
I am just using Visual Studio 2008 for HeeksCNC 1.0, and Visual Studio 2013 for trunk version. It builds fine with the free “Express” versions.