So this K40 was donated to a local Craft Collective and I’ve been setting it up and trying to get it working well but the power output is oddly weak. Supposedly it’s a hardly used machine from 2019 and was told this:

I looked at the tube and it says 15ma max power.
Checked mirrors and mirror #3 needed cleaning.
Lots of dust on the top of the lens so cleaned that.
Checked water temp, 24C when testing
Set max power via POT with the milliamp meter to 15ma at voltage of 2.6V
Checked alignment out the head and got pretty close to center, it has a metal cone air-assist lens holder.
A low power burst on paper at #1 mirror showed a round dot( not segmented ).
At 10mm/s and 100% it burns through only 1 of the 3 layers in 3 ply baltic berch 3mm.

I’m going to pull the config.txt from the C3D board and look at the config for power output.
Any other ideas?

A tubes gas will ‘break down’ over time or use. If you are getting a good TEM spot, then it’s likely that the tube is getting weak. It’s three years old and many think this is about normal. However Sadler has mentioned that most of the people he’s dealt with get about 5 years out of them if not abused.

Sounds like it’s just older. If it’s running in TEM0 resonance and the optical path is aligned and clean, with proper focus, that’s probably the best you are going to do… Of course, I’m always suspicious when someone ‘forgets’ and does major damage… only once…?

Most recommend 20C, but I run mine at 25C. When it runs the temperature will continually rise if you can’t remove the heat out of the system.

However Sadler has mentioned that most of the people he’s dealt with get about 5 years out of them if not abused.

Didn’t Russ also say tubes don’t age just sitting unused? I could have sworn I heard him say that but maybe it was someone else. THIS is why I stated how little the tube has been used.

But come to think of it, since so much fine dust in the air was able to infiltrate the closed machine’s lid and get onto the top of the lens, it is probable that the end of the tube is coated with dust also. Only the mirrors and focus lens have been cleaned.

Regarding further understanding of how the RuiDa works using 2 signals:
I run the same Doiley project( I don’t have LightBurn DSP ) and changed the min power and max power from ( min/10%, max/50% ) to min/10% max/90% and saw little change in the oscope PWM action. No, I didn’t measure since I don’t care about those specifics right now, just looking for dynamics.

What I figure is happening with why the PWM is varying at all, it has to do with the default settings figuring the laser head has some amount of mass and therefore does not do instantaneous acceleration or deceleration. Therefore, the RuiDa firmware is doing velocity based adjustments on the power output. So the big changes on the Oscope show up when I change the speed from 400mm/s to 100mm/s. At that point, the laser power control(PC) has a chance to hit 90% power and sure enough the PWM really widens up.

I do not know if this type of control setup is “better” than Smoothieware, GRBL, RepRepFW, etc but now it seems we have a better understanding of what the RuiDa controller does.

The LPS requires two signals, L & IN, no matter what controller you use… I guess I don’t follow.

I also don’t know what you are running there, a K40?

The LPS requires two signals, L & IN, no matter what controller you use… I guess I don’t follow.

The LPS-IN can be just pulled to 5V and I would then NOT call that a signal from a controller. The RuiDa actively manipulates/wiggles/toggles/tweaks/changes/etc TWO lines leading FROM the RuiDa controller TO the LPS. Controller boards running Smoothieware/GRBL/etc firmware ONLY use 1 control line to the LPS via LPS-L while the LPS-IN is set to a fixed position/voltage.

I also don’t know what you are running there, a K40?

It does not matter, it’s a standard chinese laser power supply and why all along I’ve been trying to use the labeling of these LPSs.

Then you are not understanding what is being shown on the Oscope traces and the description of what is happening and why the LPS-IN signal from the RuiDa is being varied when infact the design is vector lines with a fixed output power setting.

You are controlling the lps using the ‘pot’, that makes it a control line. It’s the cheap approach to taking it from automated to manual I.E. you get to turn it manually but it’s still a required control line.

I went out on the net and grabbed 3 lps’s for sale. Here are the wiring configurations 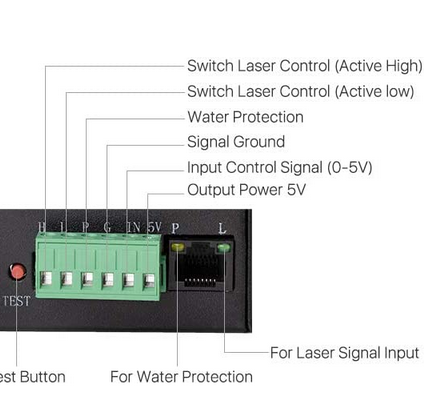 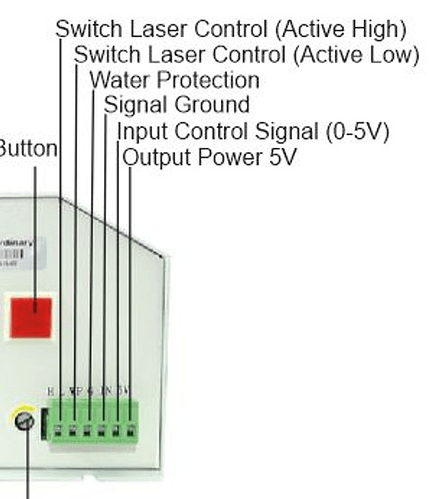 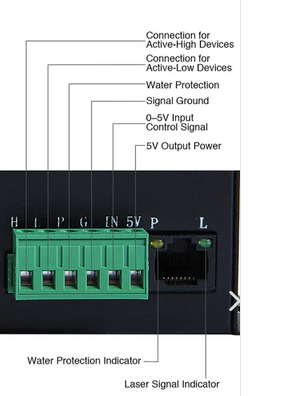 Which one can I refer to that supports your position that IN is not a control line so I can understand you correctly.

I think it’s pretty well known in the industry that the gas mixture will break down into more carbon dioxide, I believe. It does break down over time, use or not. Most suggest you purchase a tube from someone who doesn’t have old stock.

You are controlling the lps using the ‘pot’, that makes it a control line. It’s the cheap approach to taking it from automated to manual I.E. you get to turn it manually but it’s still a required control line.

Nobody does that when they use GRBL or Smoothieware or RepRap Firmware or blah blah blah. ONLY people who used M2Nano constantly touch the PC POT and I’ve mentioned this many times. It’s one of the reasons why people upgrade their controllers.

Which one can I refer to that supports your position that IN is not a control line so I can understand you correctly.

You proved my point, LPSs all have the same input so it does not matter if we are talking about a K40, K50, Thunderbird, Funky Chicken brand or any other CO2 laser with non-integrated LPS.

OK, if that’s your position.

Even though every one states that IN is a control and L is enable for the laser.

Even though every one states that IN is a control and L is enable for the laser.

And yet non of the open source firmware manipulate LPS-IN… it is set to a fixed value and NOT CHANGED for most of the life of the lase tube. Sometimes, as the tube wears, and only then, does LPS-IN get adjusted to drive more current through the tube in attempts to get the overall output back to the same power output when it was originally setup. Otherwise, LPS-IN is NOT CHANGED.