Although I have a set of strippers like in the film I like these for my electronic builds. 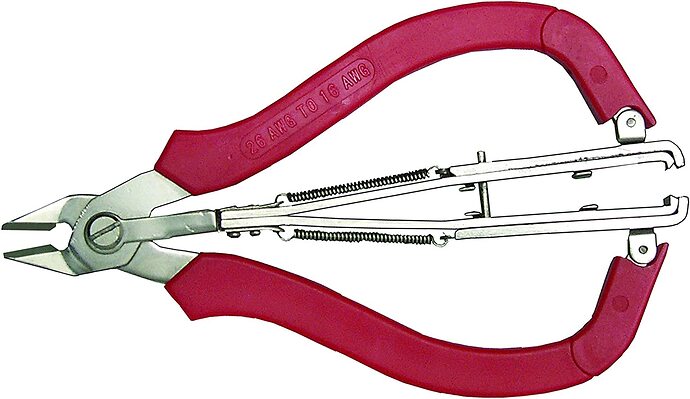 Klenk Two in One Wire Cutter and Stripper-Small DA76070 - - Amazon.com

Klenk's 2 in 1 Wire Cutter/Stripper The same tool cuts and strips! Cuts wire with one end, grabs and strips wire with the other. No stripping holes -- stripper self-adjusts to wire size. 5'' model strips electrical wire sizes 26 to 16 AWG; 6'' model... 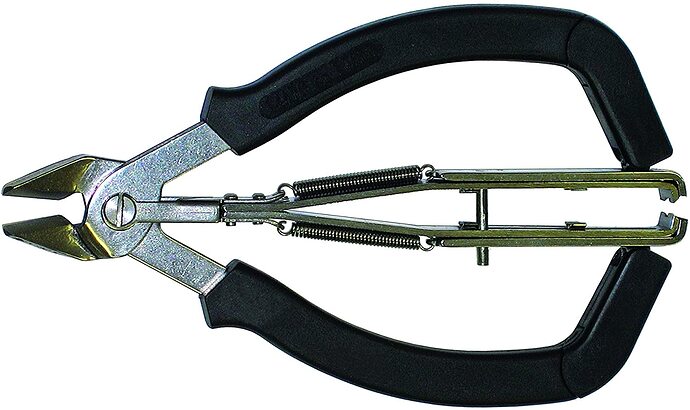 Cuts wire with one end, grabs and strips wire with the other. No stripping holes -- stripper self-adjusts to wire size 6'' model strips electrical wire sizes 14 to 10 AWG. Cutting head is full-flush cutting and low profile with stainless steel,...

I’ve had a set of these for many years, versatile and easy to use. Nicely effective on multi-core and ribbon cables for getting all the leads stripped evenly.

The 808-080-F is a versatile Wire Stripper with sturdy construction capable of cutting and stripping flexible cable from 0.2 to 6mm without any adjustment. Blade pressure can be adjusted for external sheaths of 3 core cables and also features a cable...

The biggest issues I have see is that the metal they use to machine stamp the segments, is simply junk. Now this makes a great low cost tool and if you stick to the warning printed on the tools, Copper only, they probably have a decent life. The issues I see are the teeth getting dull, the flush cut blades don’t line up, and the handles bend too easily. And all this is often after the cover shoved onto the handle has long since fallen off.

Robo-Strip&Nip: … Always end up creating more inconsistencies and damaged connections then than solved. In my work. Most of the wires are stranded, and the shielding cannot be crimped or punctured. The video pointed out much the same complications.

So far my best pair of nips are a set that go up to 26ga, and the handles came off long ago (within the first few weeks). I used Plasti-Dip to kinda build up new handles. Only recently I found a few on Amazon that offer a similar fine pitch. The one I grabbed is sharp, the blades line up, and it cuts a much more fine pitch than the previous pair, but the blades are poorly calibrated so they cut past the gauge specified.

I never trust the bolt sheeting nips: Mostly because, I have observed that trying to sheer bolts in tools rated for copper cutting, results in bent handles, jaws no longer align, and center mount is now irreversibly loose. Simply put the junk steel they use to make the tool is, too soft. Cutting a bolt does permanent damage. So instead I just use a bench grinder or a cut off saw, then few hits with a diamond tooth file or run the thread through a die to clean up the threads.

Flush cut nips: These tools are the hardest to find in long life. Most are built with cold rolled steel that has been sheered off by a hydraulic press then impact formed into a tool. The central pivot is often a rivet or some other equally non serviceable mount. After few uses the blades no longer align and it only gets worse. The best versions are built with cast metal and although they too are not serviceable, the teeth, handles and pivot seem to be much longer lived over all.

Crimp & Nip tools: I wont even both with making discussion the wide disparity in teeth types, alignments and even issues in releasing the crimped parts (eye-roll). But these tools can be found not so expensive, manufactured the much the technique same as a wire snip tools. The issue at hand is that the ones that are the simplest to use, having no interchangeable parts, also have junk handles. Far too small, too thin, and in desperate need of the metal to be doubled up and riveted as they do in the jaws, but in the handles. Because of this weakness an otherwise decent wire crimp will start to deform and fall apart pretty quickly.

Strip & Snip tools cut off to much wire when all I wanted was the shielding. I teach my coworkers to employ a double snip. That is to very rapidly nip at the gauge for the cut but then switch the wire to the next largest opening, then pull. Attempting to strip the wire at the designated gauge often results in the blades catching some of the stranded and cutting them off, or pulling them out of the wire. I seriously have to train new employees how to do this or we end up with a lot of damaged wires, and thats even using brand tools like Irwin, or Craftsman.

Stick Shielding bits: This can be frustrating. I have to prepare several piles of wire. Then crimp, solder and heat shrink in multiple steps to build up 6-20 harnesses at a time. While still being complained at that I need to move faster because the harness is seen as low value so it shouldn’t take any time at all… Meanwhile every other wire cut the Polyvinyl shielding gets stuck in the strip tool teeth. Well the next part will just knock it out right? Nope, and now it’s damaged the end of the wire !!! So now I am adding time to the work to stop and clear the shielding from the sheer after every wire or risk damaging the next. Also not brand specific, but does have to do with the effort put into the quality of the product, and the reason why is very explainable.

The grip Teeth of the tool: This component seems to be cosmetic on most. The teeth are not able to be sharp, are often rounded, and sometimes have an enamel coating over them. So I don’t put much any faith in the teeth on any wire snip tool doing much of any work, never mind passing a grip test. I generally only use the teeth to adjust small nuts or screws, not wire. If I need to pull a wire I find a Pliers or need nose with good sharp teeth, maybe even a vice grip or a bench vice. Another issue is of course the before mentioned soft steel used to make the tools, as this often only marginally harder than the materials I am working with. Kinda like those screw drivers that are seriously good one one use, and probably only one screw before the tip breaks off, and thats of the screw doesn’t strip first… Made in China.

Springs: most of my tools, one of the first parts I remove is the spring. I find that the spring causes more hand fatigue if left in place. So I remove it on my personal tools rather than waiting to see if it will random go flying across the room on it’s own.

I have learned that really any tool will work for stripping wire regardless of the brand. But since the grade of the metal is so low they loose performance quickly. Becoming dull, deformed, loose bent or even cracked. I think if the manufacturing companies were to up their game and use a “better quality steel,” even the low end junk would be pretty decent.