Which vendor? Ebay? Amazon? Other vendor?

There are many “manufacturers” of K40 style lasers. In fact, the term “K40” is best understood as a style of CNC laser rather than a model number. In general, the actual manufacturer of any given K40 is is unknown. They are sold on ebay, and increasingly on Amazon by either trading companies who did not manufacture them, or importers who buy wholesale lots from either one of the manufacturers or from trading companies, then do a variable amount of cleanup, alignment, testing and so on.

Often, the total amount of care and “quality” in a machine is reflected in the price. K40 makers have been in a race to the bottom on price for some years now, so there is always a fight for cheapest on ebay, and sometimes on Amazon. The more care and effort expended in pre-testing and setting up a K40, the more you can expect it to cost.

There are some people who report receiving a K40 which could be used right out of the box with only the minimum necessary set up of cooling water, exhaust air and checking for safety and water leaks. There are also people who receive dented boxes, cracked laser tubes, units with alignment and focus problems, loose belts, or simply non-functioning electronics. Most often, the cheapest ones can be expected to have more problems. Of course there are very high price bad ones too. It’s a difficult and opaque issue. At the end, you pays your money and takes your chances.

That being said, sellers in the US$400 – US$450 range are beginning to provide the “just works” pretested and aligned version more often as measured by posting in forums. In the US$350 to US$400 range, you’re taking more chances on getting a not-as-well made and/or tested one.

Some of them look different. Which version/type should I buy?

First of all, the paint colors mean nothing whatsoever. There is nothing you can determine from the colors other than whether you like the colors or not. One vendor may like certain colors better, too.

There has recently appeared a “mini-K40” on ebay. This is a smaller unit, which may suit your needs as the original K40 style is BIG. It eats up a lot of workbench space. The “Mini” version solves this by a slight repackaging to get smaller height and less width. It is virtually certain that the shorter, lower power laser tube in the Mini is cheaper, as is a smaller case.

And shorter is lower power in laser tubes. In CO2 gas lasers, all other things being roughly equal, power is proportional to length. The original K40 uses a 700mm to 720mm long tube, and claims 40 watts. It is best thought of as a 30-35W tube. You can’t stuff a higher power laser tube into the width of the K40. It would be longer than the box is wide. Some “K40” boxes were made with a hole on the right/control side to accommodate a higher power (and therefore longer) 50W tube inside a bolt-on metal shield. The Mini has a 600mm long tube, probably 20-25 “real” watts, advertised as a 30W tube if you buy a tube, and maybe advertised as 40W in the ebay advertising.

Some people have reported ordering a full size K40, and receiving a full-size K40 case, but the laser tube inside was only 600mm long. The manufacturer/seller was making more profit by substituting in a cheaper, lower power laser tube. If you intend to buy a K40, make sure it comes with the longer tube.

Get the M2 Nano controller

Some early K40 style lasers came with a “Moshi” controller and used “MoshiDraw” software. These are both judged to be difficult to use and get good results with. Most current ones have the “M2 Nano” style controllers. The controller board has “M2 Nano” labeling on the control board. These can be used with the maker-supplied (and probably cracked, illegal) CorelDraw and CorelLaser software. However, the M2 Nano controller can be used with the free “k40 whisperer” software. This gets more user comments about being easier to use and more reliable. So if you have a choice, get the M2 Nano controller.

There are three reasonable controller options:

Please feel free to share your experiences, good or bad, in comments below.

I did (I thought!) a fair amount of research on these cutters. I was well aware of the problems etc. When the Covid19 kicked in, I realized I was saving enough money in fuel I could warrant buying one. As I said before , I built a CNC and have a diode laser, so this would really just be quicker at what I can already do.

I bought from this supplier (My review is top of the list in my partners name “Michelle”) : 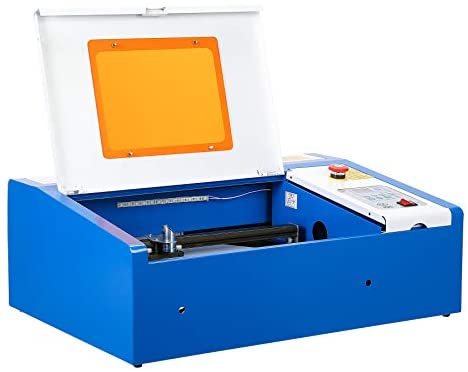 So after the purchase, I started buying extra bits. Water container, glasses etc - all the stuff you need. I then watched another youtube video, and someone on there commented "The most important thing is the length of the tube - if it’s not 700+mm its not 40w). Guess what - mine is 600mm.

So I contacted “UCool” and asked them to either supply me with a 40w tube, or give me my money back. Unfortunately by this time I had cut 2 inches off the exhaust lol - so it wasn’t going back.

They replied and said it was 40w, because they put “more CO2” in the tube. But, as they are so hot on customer service, they could offer me a partial refund of £20.

They ignored that request, and said it is a 40w tube, but would I like a partial refund of £30.

After telling my story to the same guy on youtube, he forwarded me a very useful link to a website explaining how the tube length determines the output power. So I forwarded that to them, pointed out the paragraph of interest, and explain it was written by professor this and professor that.

Then I put a bad review on Amazon - warning people not to buy it.

They came back saying it was a 40w tube, and they would offer me either a partial refund of £50, or I could send it back.

Obviously sending it back wasnt a option now, I’ve cut the exhaust and made other mods, so I suggested to them :

Instantly got an email back saying they had refunded £100.

I then contact Amazon, and explained the whole situation. They told me they couldn’t do anything as I had been satisfied with the outcome. The only way Amazon would take the ad down is if I sent it back.

UCool then had the cheek to email me and ask if I would change my review as I had the refund. I told them I hadn’t even turned it on, so I may adjust my review once I know if it works or not.

Unforunately you will not be the only one they have been cheating on. They just put a lower power tube in it to maximize their revenue.

My advise is to ask the supplyer for the tube length before ordering and let them guarantee that you get that length.

Why I like the laser I use Laser Engravers/Cutters

For some reason the formatting is lost when I cut and paste so I apologize for the formatting! The distributor of my lasers, Preenex, reached out to me to answer questions and write an 800 word essay on my laser journey. They gifted me a $75.00 Amazon gift card for my efforts. They then asked if I would post the essay to the forums I frequent. I told them that I would have to give full disclosure that I was compensated for the essay. They were understanding and said that was fine. Here is the …