What am I doing wrong to get the filament to twist like that during a print ? 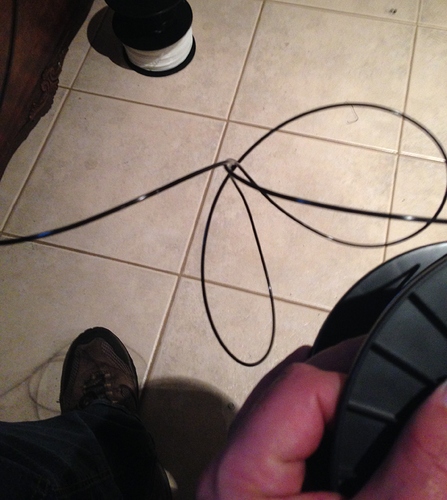 It may be the way it was wound on the spool. How are you letting it unspool? Vertical? Horizontal? You should also have at least a little bit of tension on the spool so that it doesn’t unwind too much while feeding.

You remember your first question? Horizontal versus Vertical feed. Well if you pull filament off the side of the roll it holds the twist that it got while being rolled. Pulling the filament off ‘vertically’ or essentially unrolling it while printing undoes the twist as it unspools.

I am vertical but left to the extruder. Mounted on a pvc pipe that is smaller than the spool hole diameter.

I will make a jig tonight so that the spool is top center behind the extruder.

I have the same issue on my current spool. Its mounted on a horizontal pvc pipe and unspoilt directly into the extruder. I blame it on the manufacturer, it was on sale on amazon.

FWIW, I have my filament on a book shelf slightly above my printer, and I’ve been printing horizontally via the CD spool method for the last year and have never had a problem with the twists.

I also make sure though that as soon as I swap colors, the filament is fed through a hole on the spool to keep it from getting somehow tangled up/ or interlaced.

Do you notice your problem on all of your products and are they all from the same source?

@Tim_Sills “through a hole on the spool” you mean one os those holes on the side of the spool ?

As for source, I have only bought from 2 source so far and it does the same, but not always, pretty random.

As soon as I pull the filament out of the extruder I’ll feed it into one of the holes that are typically at the edge of the spool. I’ll feed at least a few inches through so that it won’t pop back out (or put a piece of tape on it).

The only time I had like what your pic shows was when the filament fell off and got twisted around. Maybe I’ve been fortunate, but I haven’t run into this. Although I just got an order from FC and am printing with one of their spools so let’s see if this is a by-product of feeding horizontally?

Spooling filament on its side seems like a good solution but its a pain really. Vertical mounted spools work much better,

She knows it’s another girl.

@Andre_Courchesne1 I think the problem is the same as I have seen with other cables on spools (including fishing line), when the product is wound on to the spool it is done so under tension, this is to get the cable (filament) to pack neatly so it should then come off easily, the problem is the inner layers are still under tension and act a little like a spring, when the tension is released it tries to unwind off of the spool, and that is when the tangling occurs, to prevent it from happening you need to maintain some tension between the spool and the extruder to prevent the filament from unwinding and tangling. Something to lightly brake the rotation of the spool should work.

Is there any skew in the hobbed bolt/pulley? I think that could do it.

@Jeff_DeMaagd interesting… I will draw a line on a white filament and see if it twist as the extruder does it’s trick.

to much tension when feeding it in, get yourself a thin cable and pull it through your fingers then hold it tighter and watch it bend out of shape, same thing really

@lee_bowyer , would be better spool holder (with bearings) help this?

My new spool holder seems to give me MUCH better results: