Well for now I came up with a solution for my 12x12 heated bed issues. For those that weren’t in the thread my RAMPS board couldn’t deal with the amperage draw and was shutting down so I tried to use a solid state relay to by pass.

After one burning up and the next coming locked in the closed position I’ve given up on them until I can build one of the MOSFET circuits I’ve been given diagrams of (thanks guys!)

Lesson learned cheap electronics from China only save money. Time and effort just end up being wasted.

For the record the board from RepRapDiscount is running my Prusa and MK2A bed with no issues. So it’s not necessarily bad just not as good?

Yep, Reprap discount mosfet and poly fuses seem to be under specced. Have same problem with RUMBA.

Is it possible to replace the mosfet and poly fuses and what would be a good replacement?

You could but I wouldn’t know where t to start to spec them. Maybe the ramps wiki

I replaced the polyfuse on my ramps board (rated at 11A) with one rated at 14A. Since then I’ve had no issues with my board.

You wouldn’t need to replace the MOSFET as it has a 50A rating. http://www.mouser.com/Search/ProductDetail.aspx?R=STP55NF06virtualkey51120000virtualkey511-STP55NF06

As far as RAMPS boards go, I always get mine from @SainSmart and haven’t had a problem.

WRT to poly fuse replacement, I’ve seen folk using replaceable car fuses. That way you can spec the fuse for your application.
Replacing mosfet is a little more tricky as the pcb will be designed for a particular heat disipation threshold, a beefier mosfet may get hot enough to exceed that threshold. Heatsinks and fans could alleviate this but theres a risk associated to these cooling methods failing. Personally, I’d create a standalone sheild, that way you can add the freewheel diode, which the ramps board doesn’t (but should) have.

@Tim_Rastall the freewheel diode is mentioned in the other thread too. What is it’s function? In planning on building that circuit next week probably and was curious

It’s basically a safety measure that protects your mosfet from getting fried. Wikipedia explains it better than I can: 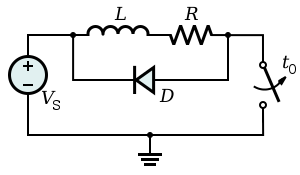 A flyback diode is a diode connected across an inductor used to eliminate flyback, which is the sudden voltage spike seen across an inductive load when its supply current is suddenly reduced or interrupted. It is used in circuits in which inductive loads are controlled by switches, and in switching power supplies and inverters. This diode is known by many other names, such as snubber diode, commutating diode, freewheeling diode, suppressor diode, clamp diode, or catch diode. Fig. 1 shows an ind...

and @Thomas_Sanladerer can probably explain it better than Wikipedia.