After a recent post by @HalfNormal I decided it was time to finally add some visual cooling water flow indicators to my lasers. I have electronic interlocks to prevent the laser from firing if there is no flow, but it’s defiently good to have a back up in case it fails to trigger, or as a quick way to rule it out as a problem.

The laser gods where looking after me today! Laser Engravers/Cutters

On Thursday, I was setting up to do a project for a friend and my computer that I use for the laser decided to go on the fritz. I told her to come back this morning so we could finish the project. Lightburn let me know that there was an update so I went ahead and updated. Well I was able to frame out the project, but the system would beep and not run the project. I was getting an error message that the system was busy. So now I am trying to troubleshoot the computer, Windows and Lightburn to see…

Picked up a couple of PC flow indicators and some G1/4 threaded barb fitting off AliExpress, which was the cheapest option I could find. I picked the yellow spinner to have an option as you will see below.

My cooling bucket is underneath the laser and I’m adding the indicator on the return side tubing, just before the bucket. It’s a bit dark underneath, so in order to make it easier to see I’m adding an illuminating LED.

Drilled hole in the bottom, just shy of the cavity, and tacked the LED in with some glue. (The LEDS are 3V, max 24mA and I’m running them from 5V USB ports on my power stirps. So I have a 100 ohm resistor in the circuit to limit the current to the max or below.) 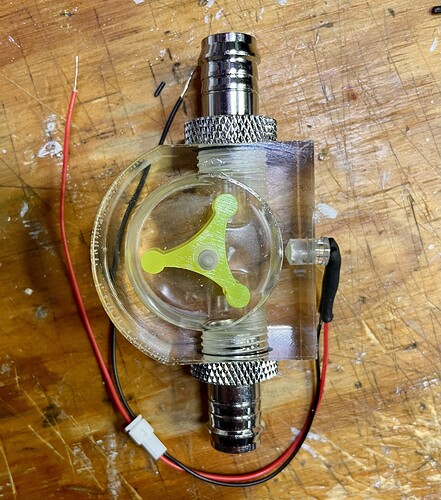 I had two options I considered for illumination. One was a bright white LED 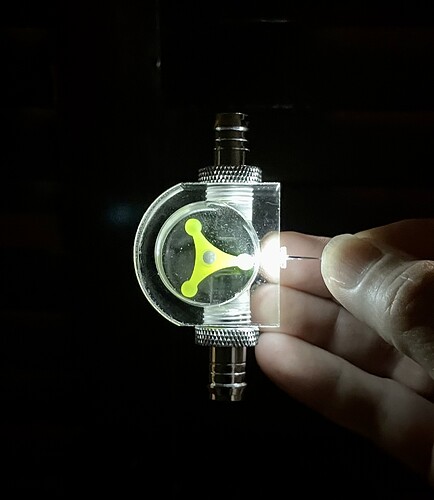 The other was a UV/Purple LED. This is why I selected the yellow spinner as I suspected it contained a fluorescent yellow dye which would fluoresce green under UV light. 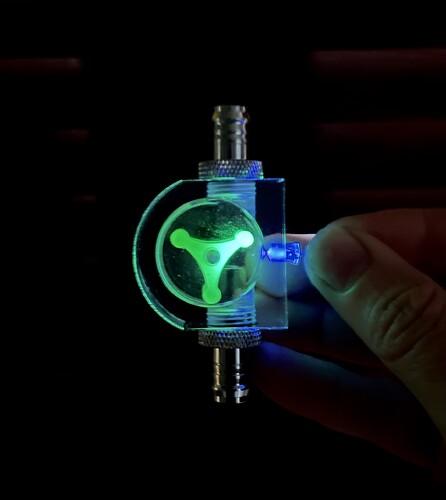 Decided to go with the UV LED because it made the spinner easy to see and it looked really cool.

An illuminating way to watch your water flow.
Now to make it blink when the water flow stops :)!