Using three esp8266 boards, I want them to link with one being the main control unit for the other two over WiFi. Is there any examples similar to this idea? So say one unit has a button or remote input and the other two change with the control unit?

ESP Now would probably do the trick. Search this forum for it, another user shared some starter code a while ago. Also there’s more information online. Good luck! 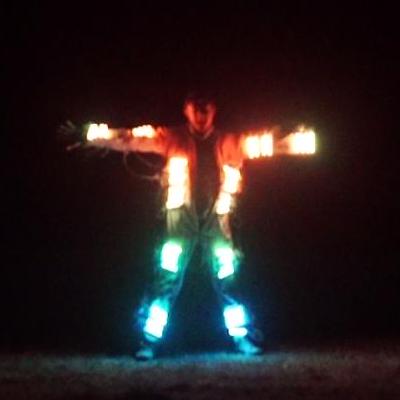 A very basic TX and RX demo for the ESP-NOW Protocol for the ESP8266 &amp; ESP32

@Jeremy_Spencer @Chris_Stock that should give you a basic idea of how to get going! ESP-NOW is massively faster than anything you can implement in WIFI for the ESP8266. Here is an example of an how it works https://www.instagram.com/p/BcZO9TWFkt5 both goggles have an esp8266 receiving data and then rendering it to the pixels. The main esp8266 you see me powering on is whats actually doing all the hard work

@Remi_F Mesh networking on the esp8266 is slow

Found this code online and it looks like a promising start to what I am trying to make.

It should make multiple props connect to each other and one would become the master and send colors to the others that join.

@Chris_Stock Again, Mesh Networking on the ESP8266 is super slow in comparison to ESPNOW or even regular UDP broadcasts

Thanks Leon I’ll look at the example you posted again. Do you know how to convert Progmem to something esp8266 can use? I am trying to convert adafruits supernova poi code to esp8266.

@Chris_Stock mmm no idea never used progmem. Look into using the SPIFS (on board file system) there is a pretty easy api included in the arduino ide for the esp8266. you can store about about about 3Mb(depending on the module you have) and read it like a sd card

@Leon_Yuhanov Thanks for sharing the Instagram link. I am having trouble implementing sending CRGB data via ESP-NOW and was wondering if you had a link to the code for the project to see if I can find any clues.

Hi @chuck808! This is content that was imported to MakerForums from Google+ when Google shut down Google+ (thus the #gplus label), and @Leon_Yuhanov has not yet logged into MakerForums, so they won’t get notification of your question, sadly.

While there is an archive of old Google+ FastLED content on Maker Forums, the FastLED community has requested that new conversation happen on Reddit:

For folks using the FastLED library please join us at reddit.com/r/FastLED. The posts here are an archive of FastLED discussion from Google+ — please have new conversations at reddit. New posts in this category are closed. The FastLED community is a place to discuss what you are working on, get help, share code, find information about updates, etc… You can also visit the library home at http://fastled.io/ We encourage you to read the FAQ before you post. If you are asking for help, please i…