Hey all, long time no see. This will cause confusion, so please let me clarify what I’m asking:

What I am asking about is: Has anyone already implemented, or thought about implementing and rejected it for some reason, using the ESP as a serial port server?

E.g. your target device, be that a laser, CNC, Arduino, another ESP, whatever and you talk to it through the ESP which is wifi connected to your PC and is providing the serial port connection to that target device.

The advantages here are:

Just seems like something that should be done. I’ve used ESP’s to do this but NOT following the JSON server data format. I don’t see why that couldn’t be added.

I’ve used esp-link for some low speed stuff for a while but recently moved to just using an rPi. 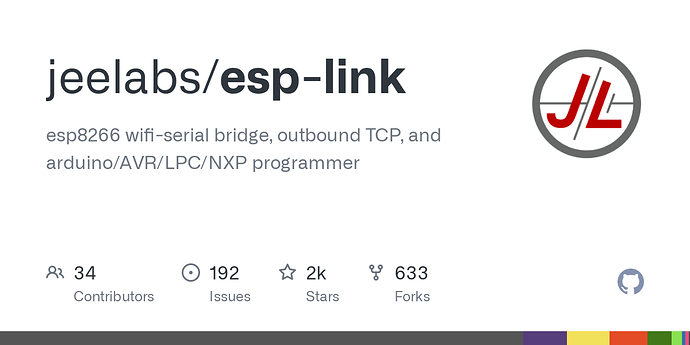 I had a Java client app running on an rPi before just moving the rPi to the RS232 device.

Thanks for the link, however, esp-link does not appear to be compatible with ChiliPeppr. At least not as far as I can see. Are you running the ChiliPeppr compatible serial server on the rpi?

Are you talking about ChiliPeppr streaming ascii gcode? If so any esp serial bridge would do. Or does ChiliPeppr stream something else? you mention JSON above?
I’m not terribly familiar with ChiliPeppr and am kinda confused by the above.

Well, first, I’m ALSO new to ChiliPeppr so it’s entirely possible that I misunderstand, but when I connect to the “serial port server” via the web browser, I get a /list/ of the ports available in JSON format. I assUme that this is expected by the workspaces? I mean, how else would it know that I have 2 built in serial ports and a USB adapter plugged into the PC I’m using for my CNC machine now? I don’t see anything in the esp-link system which shows a JSON format list of ports. It does list the ports, and perhaps could be adapted to support ChiliPeppr, but doesn’t appear to /at this time/. Is yes? No?

Having learned a bit more about chilipeppr I can see more clearly what you are getting at, essentially you are thinking of an esp32 port of serial-port-json-server; which is currently written in Go and only runs on platforms that Go supports. eg *nix. *bsd and windoze.

Maybe some of the older Chilipeppr hands have seen something like that discussed before, nothing popped up via google.

PS(edit) In the absence of that you should check out Wifi Serial Bridges and servers; this might be a good place to start; it talks about how to run the esp-link code @dougl linked to above to provide a ‘virtual’ serial port you connect to as if it was a local usb port or device, but actually talks to the esp over the WIfi to communicate with the controller.

It’s important to note that using WiFi/Bluetooth comms from a PC to a CNC controller is essentially a ‘solved problem’, and many people have done this using tools like esp-link.

Oh, I think I understand. esp-link connected to CNC. Local PC somehow sees that as a local “virtual” serial port. serial-port-json-server on local PC connects Chilipeppr to the virtual serial port? Bit of a kludge, but hey, if it works, it works! Thanks.

Yes, that is how I imagine this would be set up.
There may be alternatives such as having a PI (or similar) connected via USB next to the machine running serial-port-json-server. There may be other ways, I’m just not familiar enough with this to know.