This is what happens when you get too complacent and do not double check your work before you apply power to your project.

A couple of quick notes. I never installed an on/off switch with this printer because I was using a power strip to turn on the printer and fan to cool the control board. The way the control board was wired up, it was powered by both the USB connection and 12VDC input power. Disconnecting one would not disconnect total power to the board.

In another thread, I stated that I thought the filament feed stepper was defective on an older printer I was trying to resurrect. I wanted to verify that it was in fact the stepper that is faulty so I was working on troubleshooting the problem. My wife wanted to go out and get some shopping done so I thought I would work on the printer while she was getting ready. I wanted to make sure I had a good stepper driver on the board so I installed a new one. Unfortunately in my haste, I installed it backwards. I powered the board on and stepped away to get some tools. By the time I came back, the board was literally in flames. I unplugged what I thought was the printer power cord but it was not. The board continued to burn. I pulled the USB cable from the board and it was still powered on. This is when I realized that I had not pulled the correct plug. I managed to disconnect the correct plug and bring the printer outside. The only real damage so far is the control board. The flames did not get to the wiring that I can tell. I do not know if any of the electronics other than the control board was affected so that will take time to sort out.

Interesting part is that it is the X driver that caught on fire and not the extruder driver which is red in the picture below.

Lessons learned;
Accessible power switch is a must.
Double, and triple check work before applying power.
Never work on projects when feeling rushed.

Since this is an older Prusa I3 clone, I have spare 12VDC Marlin 1.4 boards and Arduino Megas lying around to try and bring it back to life. 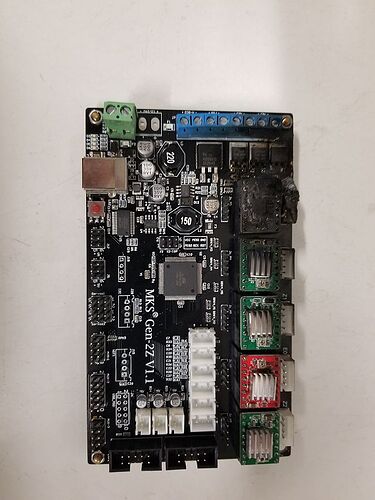 Ya, I blew up a RAMPS/Mega board once putting a driver in backwards. No flames but I didn’t have to rush off and the smell of ‘magic smoke’ is well known to my nose so no flames.

As you mentioned, the red driver can be seen with the voltage adjust POT opposite that of the others.

glad to hear it didn’t get further into things.

Those electrons are not super forgiving are they?

Worth checking on 32-bit boards before buying anything new to replace this; I wouldn’t get an 8-bit board these days.

It’s possible that other drivers were damaged even though they didn’t catch fire. With that much char it seems reasonably possible that logic lines were exposed to 12V. In your place I’d be inclined to write it off.

If I were trying for a close replacement for that board, I’d consider:

But the latest version of that board is not only faster, it has an option for stepper drivers that can’t be plugged in backwards:

Honestly the printer is not worth a better controller. I was going to give it away but kept it around just in case I needed an extra printer for a quick project. Now it is the project!