Under extruding obviously. Printing with PLA at 200 degrees. It started again recently.

Under extruding obviously. Printing with PLA at 200 degrees. It started again recently. Last time I cleaned the nozzle, switched filament brands and it worked ok for a while. I calibrated 100mm but it came short 25.4 millimeters on the test. How do I fix this ? 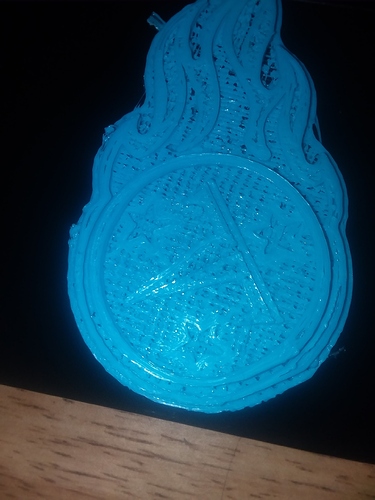 Sounds like the feed rate is not right. Perhaps the diameter of the filament is not consistent throughout the spool. Prior feedings could have been thicker resulting in slow feeding. This filament may be thinner, resulting in faster feeding. That being said, I don’t know what printer or equipment your printing with.

Double check your head temp with an external temp reader, your print looks like it was printed too hot.

Have you checked all the settings in your slicing software? Kinda seems like you’re printing at 75%. Maybe you changed a nozzel or something?

Is this a machine you built yourself? If so you need to make sure all of your E_STEPS_PER_MM are calibrated correctly (via math). Also, is that supposed to be completely round? That flat edge makes me believe you’ve got a pulley loose and causing some backlash. This isn’t exactly the most useful of calibration prints to quantify what I’m seeing in the picture.

Filament E_STEPS_PER_MM should be calibrated in free air, to get rid of any potential for the hot end jamming causing a miscalculation.

100mm cal came up short by 25mm? Wow that’s a lot!! As a cal operation this shouldn’t have anything to do with slicer, temp, etc - just straight up esteps/mm. Is your extruder skipping steps? Grinding? Or just a bad prior cal?

If you already fixed the cal and still have unexplained under extrusion, check your slicer settings “line width” and"nozzle size". While tweaking these makes sense at times you should default to them both being equal to your actual nozzle diameter. Setting line width lower results is under extrusion and setting nozzle width higher results in gaps between lines which looks similar.

I had a similar problem, the first lot of pla I used printed at 185 degrees the second lot prints at 220 and I had to adjust the multiplier to 1.3 for some unknown reason. I just put it down to using cheap eBay pla as I only play rather than make anything serious.

@Andy_Shilling I stopped buying cheap eBay pla a while back. Now I print exclusively with maker pla (http://makergeeks.com) and love it!

It’s pretty inexpensive. I buy their “grab bags” (don’t get to pick the color) and get 4kg for $60 with free shipping. At $15/kg for great filament I won’t complain about not picking my colors!!

I just ordered some PETG from them (same price) and will print with it this weekend. Hoping it’s as good as the PLA.

@Jared_Eldredge that’s a snazzy deal. Thanks for the tip

@Jared_Eldredge Thanks I will look into that, Hopefully they ship to the Uk.

@Kevin_Danger_Powers I did change the nozzle a couple months ago. My printer is a Prusa I3 pro b also. I will try switching back to my original nozzle and post results later.

@ThantiK It’s a Prusa I3 Pro B that I assembled and I have also noticed the pulley has a little extra play which I’m currently working on. Thanks

Changed nozzle. Recalibrated. Same results. Could it just be bad filament? It’s made by 3d Solutech.
missing/deleted image from Google+

@Kevin_Danger_Powers Went back to the original nozzle and increased steps to 100. Looks a little better. Still not there yet though.
missing/deleted image from Google+